Lycabettus Hill is considered as one of the most romantic places in Athens that no one, whether they are in a romantic mood or not, should miss. With a height of 277 meters (745 ft), Lycabettus is the tallest hill in the capital, offering a panoramic view of almost the entire city. The view from the top awakens emotions and provides unforgettable moments.

1. The tallest hill in the capital

2. The Athenian mesa since prehistoric times

3. The myth regarding Lycabettus hill creation

The city of Athens stretches for miles in a wide mesa surrounded by high mountains and the sea. Inside this large mesa, numerous hills and peaks create a diverse landscape, born by the violent earth movements and carved by the flow of ancient rivers. Since prehistoric times, the first inhabitants of Athens have tested their possibilities of establishing a settlement in the Athenian mesa. Being close to a hill offered a valuable advantage since the control of the naval and land routes was essential for the survival of these first settlers. Another important prerequisite was the reliable and constant supply of fresh water.  In the end, the obvious answer was a hill that was far more easily accessible and, most importantly, had numerous springs offering precious drinking water: the Acropolis. 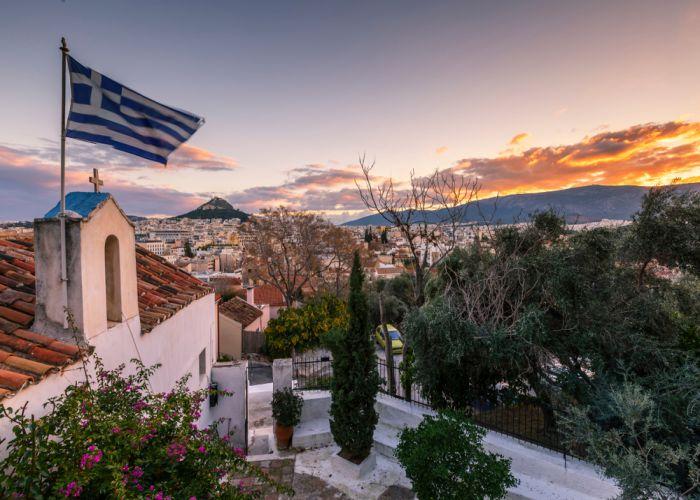 Despite the fact that Lycabettus Hill was larger and higher, its lack of natural springs sealed its fate as the neighboring hill of the Acropolis, without any human occupation. Its size though captured the imagination of the Athenians from early on. Soon enough, myths concerning its creation and role for the city started to form and gradually became part of the main mythological narrative of the Athenians.

The most popular one is the following:

According to legend, Athena, the goddess of wisdom and war, right after her victory over Poseidon for the patronage of the city of Athens, started helping the Athenians fortifying the Acropolis, their political and religious center.  The goddess came down to Earth in a gigantic form and quarried rocks from a nearby town to place them on the sides of the Acropolis rock.

In the meantime, she had to equip herself with new weapons and armor.  Therefore, she decided to pay a visit to the workshop of the god of crafts, Hephaestus. As soon as the god laid his eyes on her, her divine beauty took his breath away and he fell in love with her. Athena, reluctant to give in to Hephaestus’ coquetry, tried to escape the workshop by hitting the god with her spear. After having escaped Hephaestus' grip, she realized in disgust that Hephaestus’ sperm was all over one of her sandals. With a piece of wool, she cleaned her shoe and tossed it on the ground. Then, miraculously, a baby was born from the earth; little Ericthonius. Embarrassed to bring the baby to Olympus, she decided to put it in a jar with two guardian-serpents and keep it inside her temple in Athens.

As the offspring of gods, Athena decided to appoint the infant as the next king of the city.  The princesses of Athens, who were her priestesses at the same time, took the responsibility of guarding the jar, even though they did not know what was inside. With her mind at ease, Athena continued her work on the fortifications by bringing rocks from the nearby quarry. 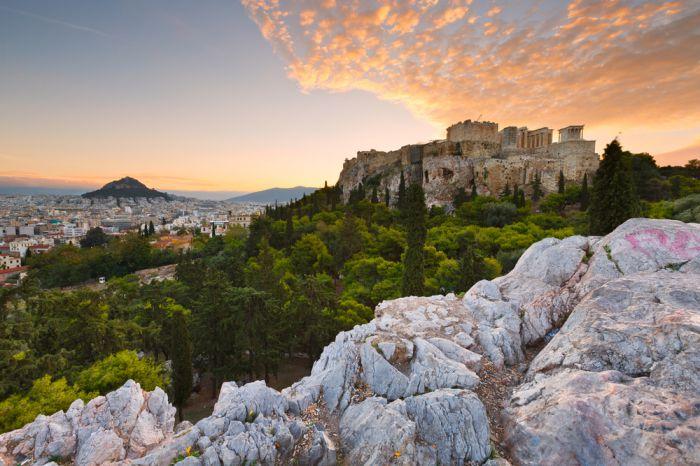 Days passed by and the future king was kept hidden inside his jar, nurtured and protected by the divine serpents. One of the princesses though, driven by her own curiosity, wanted to know what was kept in the large jar they were constantly protecting. After having persuaded her sisters, they decided to open the jar and find out the truth. Once they saw the baby king wrapped with the serpents, they started screaming out of terror, startling the snakes that attacked the princesses out of fear. In their effort to escape, the princesses panicked and started running in the middle of the night, only to find a terrible end by falling off the Acropolis' walls.

The duty of informing the goddess of this terrible incident fell upon a crow, which flew into the night sky and reached Athena in no time. When Athena heard the terrible news, scared for the sake of the future king,  she dropped the rock she was carrying and rushed to her temple After taking care of everything, she cursed the crow for bringing her such bad news, causing the bird to immediately turn black. The rock she dropped while hurrying off to ensure the well-being of Ericthonius, came to be the Hill of Lycabettus.

During medieval times, a small church was built on the top of the hill, probably on the grounds of an ancient shrine. The building that is still visible today dates back to the 18th century. The visitor can see an inscription on the floor of the church mentioning the bishop of Athens Benedict and the dedication of the church to St. George. The original building was enriched with some additions, while Queen Olga ordered the construction of the bell tower everyone can see  today.

On the west slope, there is a cave with the quaint church of St. Isidore. Northeast, is the Lycabettus Theatre, a spacious open-air theatre of 3000 seats. During the summer, the theatre hosts various theatrical performances and concerts. All these attributes make Lycabettus one of the most inspiring sites of Athens. You can access the Lycabettus Hill in several ways, while the entrance to Lycabettus is completely free of charge. In front of the theatre, there is a parking area. If you love nature and enjoy the greenery, there is a path for keen walkers with steps to facilitate the access by Plutarch Street in Kolonaki. Usually, visitors, in order to ascend to the top of the hill, prefer the cable car which is available at the end of Plutarch Street, which is close to Evangelismos metro station (blue metro line). The cable car is available to the public 9.00am-1.30am every day and runs every 30 minutes. The ticket costs 7.50 euro including the return ticket. The route is fast and pleasant. As an optional alternative, you can ascend to the top of Lycabettus using the cable car and descend on foot. That way, you can have the full local experience of the Lycabettus Hill.

Tip! If you choose the hard way (on foot) to ascend Lycabettus Hill, comfortable shoes and a bottle of water will be your best friends! The view will reward you.

Lycabettus shouldn’t be missing from your bucket list. Waste no more time; plan your own walk to Lycabettus or check out one of our Greece tours.

More in this category: « The Tomb of the Unknown Soldier in Athens || Shopping in Athens: A Shopaholic's Guide (Updated for 2022) »
back to top

1. The tallest hill in the capital

2. The Athenian mesa since prehistoric times

3. The myth regarding Lycabettus hill creation