The beautiful city of Athens is brimful of gorgeous squares that gather both the locals and visitors of the capital on a daily basis. Today we explore six of the most central, historic and characteristic squares of Athens: Syntagma, Monastiraki and Omonia, commonly referred to as the 'Commercial Triangle of Athens' due to their positioning on the map which forms a triangle, but also Klafthmonos, Iroon, Agias Irinis, Kotzia, and Avissinias, which are smaller in size but equally interesting to the keen traveler.

We love all these squares for different reasons and you will see why in more detail below. What's more, it is possible to discover all of them on foot in a single day, since the walking distance between them is never more than fifteen minutes. The order of presentation below is meant to be a walking route starting from Syntagma and ending up in Avissinias and has nothing to do with size or importance. Take your camera, your coffee, and your comfy shoes, and off we go! 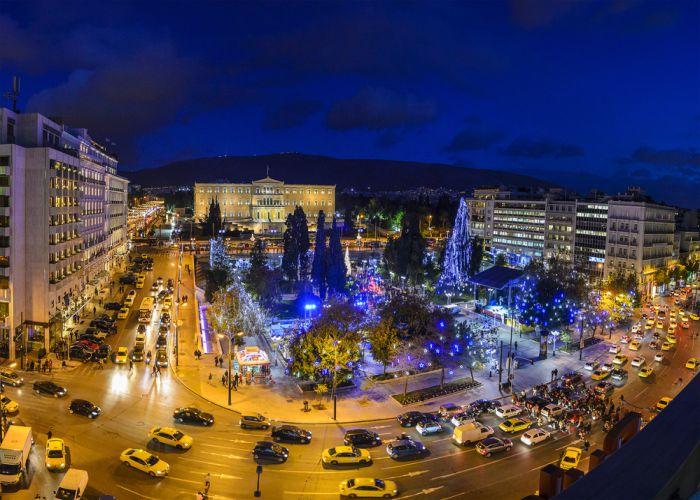 The most central square of Athens is named after the Greek word for 'constitution', Syntagma, for the uprising that took place there on the 3rd of September 1843, in which people demanded from their Bavarian king, Otto, to end his autocratic rule and grant the people a constitution. And so he did, thus introducing the era of constitutional monarchy in Greece.

Nowadays, Syntagma square is mostly known as the location of the Greek parliament (previously the royal palace), where you can watch the change of the Presidential Guard, and the National Garden right beside it, as well as the starting point of the main commercial street, Ermou.

It is also the starting point of the impressive Vasilissis Sofias Ave., home to three ministries, four great Athens museums- the Benaki Museum, the Museum of Cycladic Art, the Byzantine and Christian Museum, and the War Museum as well as numerous embassies.

The upper-class neighborhood Kolonaki, is in very close proximity to Syntagma as well, easily reachable by the pedestrian Voukourestiou Street, where all the A-listers go shopping in Athens. If you plan to explore this area on foot, we recommend a coffee to go at the nearby, well-hidden Kaya café or one of the many beautiful coffee shops in Athens. If you'd rather have a morning snack, go French in the Paul boulangerie situated in Panepistimiou str. 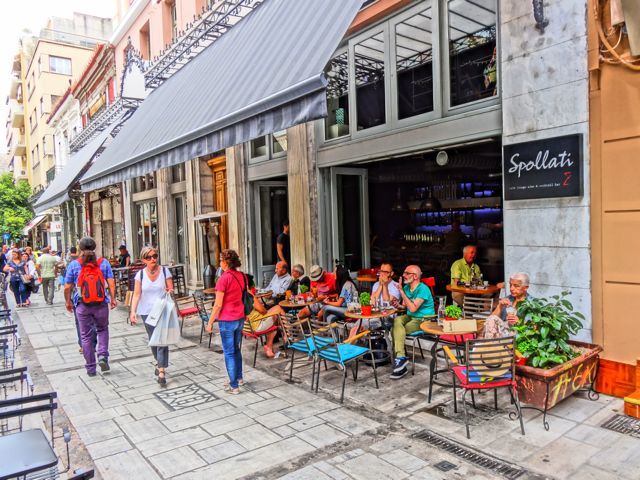 Agias Irinis Square is one of the most beautiful in our city and is an ideal destination in the morning for coffee, brunch, but also for a nice dinner that will be followed by refreshing cocktails and drinks.

On Aiolou Street, just a breath away from Monastiraki but also from Kolokotroni and Ermou Street, this square shows an alternative face of Athens the youth of the city wholeheartedly supports. In addition to advanced cafes and bars, alternative and casual, you can find places that organize theatrical events, restaurants with innovative tasty proposals, and quality street food. 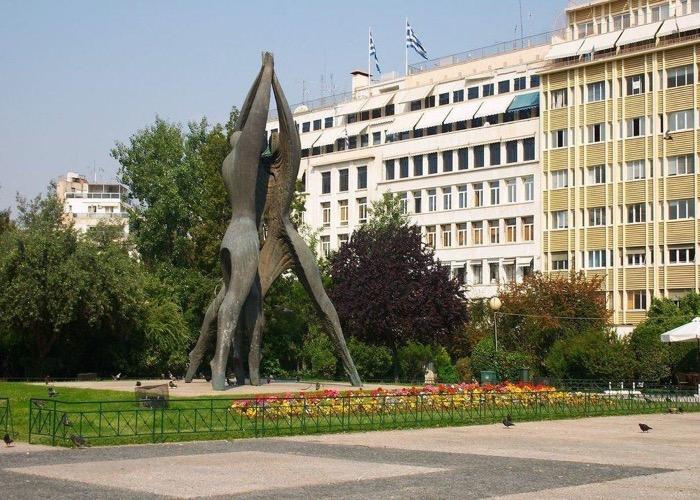 Coming down from Panepistimiou str. (also known as Eleutheriou Venizelou str.), you will pass by the beautiful Athens trilogy of neoclassical buildings, designed by the Hansen Brothers in the late 19th century, and on your left-hand side, you will see Klafthmonos square.

The name of this square, so difficult even for Greeks to pronounce, translates to 'Cry'. It stuck after Estia magazine used it for the first time back in the late 19th century to describe the protests of the civil servants in front of the ministry of economy, who were let go every time the political party in power changed to give their place to the voters of the winner.

Efforts have been made to change the name to something less dramatic, like National Reconciliation Square, after the Monument of the same name in the center of the square, by Greek sculptor V. Doropoulos, but to no avail.

The reason we love this crying square is the lovely Museum of the City of Athens, where you can learn all about the history of the city since 1834 when it first became the capital of Greece. A visit to the lovely Black Duck bistro, in the garden of the museum is also highly recommended.

The area behind Klafthmonos square is very busy with bars and cafés, including The Clumsies, which like our square, is not true to its name, and in which you will try some of the best brunches in Athens or late-night cocktails the city has to offer. 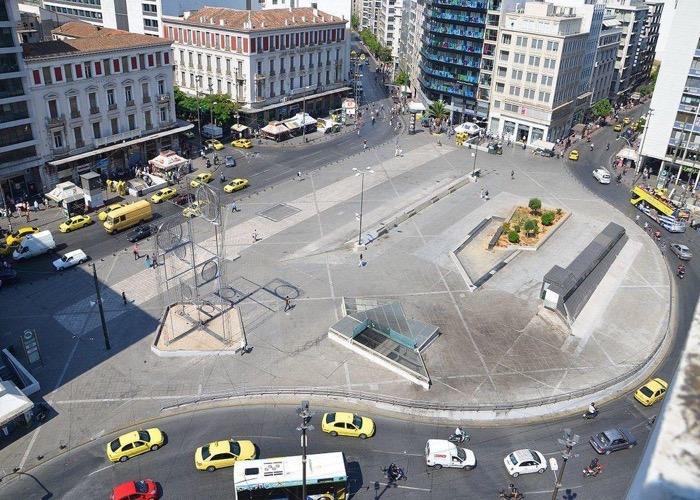 Omonia Square is one of the oldest squares in the city of Athens - credits: Wikipedia

Omonia square is a busy intersection between Panepistimiou, Stadiou (both these will take you to Syntagma), Athinas (that will take you to Monastiraki), Peiraios (will take you to the port), Agiou Konstantinou (will take you to the national highway towards Peloponnese) and 3rd Septemvriou streets. Its name, Omonia, translates to 'concord' and was given back in 1862, after the agreement of two opposing political parties to stop hostilities with one another and in favor of peace.

Today, Omonia is very busy, hosting some of the most important Athens landmark buildings, such as the Mpageion Hotel, and with the Central Meat and Fish Market in close proximity, as well as the popular spice street Evripidou, which should be on every visitor's itinerary. Omonia is also the place you’ll walk by on your way to the National Archaeological Museum of Athens, admittedly the biggest and most important museum of Greece.

If you are young at heart, and a little bit restless, then a visit to the Exarchia neighborhood is in order. A neighborhood with a reputation for rebellion and non-conformity, these traits are not resigned only to epochs of political unrest but also to unique cafes and bars of the area.

We suggest a visit to Fabrica de Vino, for the wine lovers, and to Taf café, for those who appreciate a well-made flat white (complete with latte art and a smiling barista) above all else. Both are situated in Emmanouil Mpenaki str. 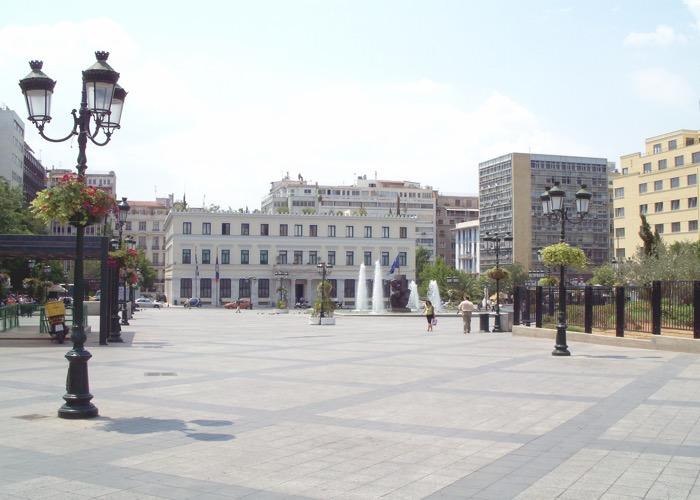 With a somewhat simpler backstory, this main square's name comes from a former mayor of the city of Athens, Konstantinos Kotzias. It's one of the most beautiful on our list, with the impressive neoclassical architecture of Athens apparent all around. Right in the front of the square, you will see the Townhall of Athens, complete with the statues of Pericles and Solon on each side.

This square has an archaeological interest as well since it used to be part of the Acharnian Way, which was going all the way to Acharnai, one of the 10 municipalities of ancient Athens. Today, some of the ruins have been excavated and are visible from street level. While in the area, take a chance to visit the famous Krinos café, dating back to 1923, and try its traditional loukoumades -hot, honey-soaked donuts served with cinnamon. Their taste and aroma are sure to ruin plain, chocolate-glazed donuts forever, but we swear it's worth it! 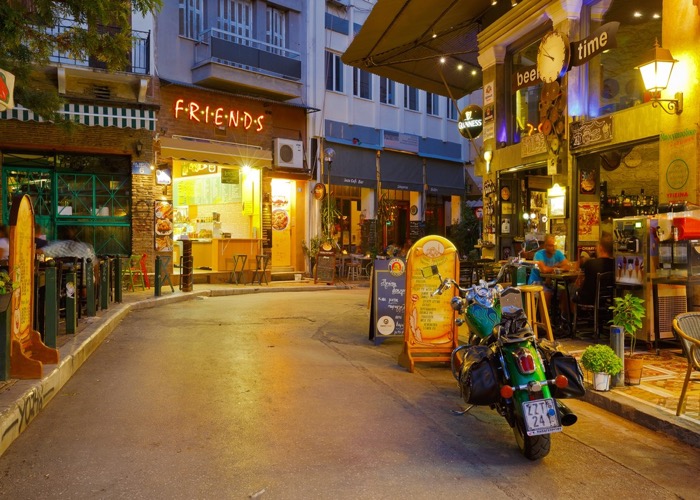 It spreads around ‘Psiri Square’, also known as ‘Iroon Square’, which translates to ‘Heroes Square’. Many famous people have lived in the area throughout the years, from Lord Byron and the fighters of '21 to Greek writer Alexandros Papadiamantis.

Nowadays, Iroon Square is a picturesque and historic square full of shops, restaurants, taverns, and bars. Every year it is filled with thousands of visitors from Greece and the world with the ultimate goal to admire its unsurpassed beauty and to go back to those beautiful years of simplicity and carefreeness the old-time charm of Iroon Square offers. 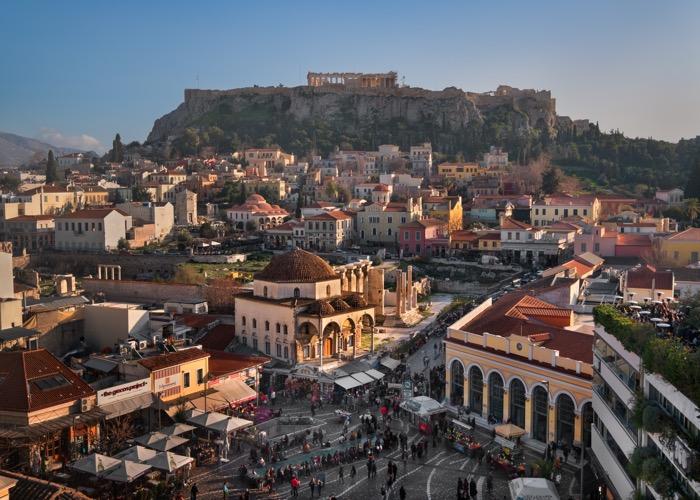 In the heart of the Athens center, Monastiraki Square - credits: anshar/Depositphotos.com

Keep on Aiolou street and you will eventually reach the vibrant and colorful Monastiraki square, the most famous square in Athens, which literally translates to ‘little monastery’. Previously part of a monastery, as the little Byzantine church of Pantassana at its center might suggest, this square is the beating heart of Athens.

Here, you will find yourself at the other end of Ermou str. that begins at Syntagma, and at the beginning of Pandrossou, Adrianou and Ifestou str. all of them very popular with tourists and locals alike for the numerous shops and boutiques they host.

The iconic Tsisdarakis mosque that now serves as a folk art museum), as well as Hadrian's library, are the most important sites on Monastiraki square. While you are here, try Greek coffee the way it should be made, prepared over hot sand, until it starts boiling, in the traditional coffee shop of Oraia Ellas, one of the oldest coffee shops in the city.

Also, don't miss the chance to try the kebab souvlaki of Thanasis, on Mitropoleos str., with a tradition that reaches back to 1964. Lastly, if you are here during the evening, take a walk around the nearby Psiri neighborhood, or have a drink at our favorite hidden garden of Six d.o.g.s bar. 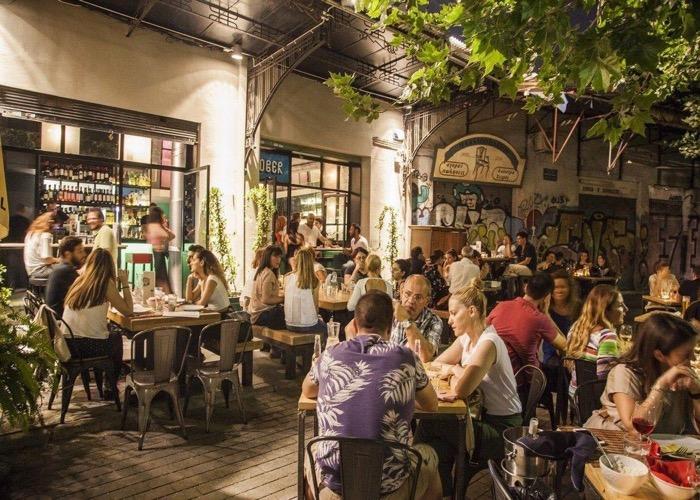 Avissinia was the common name for Ethiopia back in the early '20s. The reason that an African country so far away gave its name to a little square in the heart of Athens is not clear. However, it is believed that this took place as a result of the financial aid commissioned by the regent of Ethiopia at the time, Haile Selassie, to poor Greek immigrants who were forced to abandon their homes and fortunes in Asia Minor as an aftermath of the Catastrophe of Smyrna, and make a new life in mainland Greece.

The locals refer to it also as giousouroum, after the family name of one of the first and most prominent merchants who made his fortune here, after having left Smyrna.

This little, central square is nowadays a window onto a world long gone. Merchants sell antiques, old coins, vinyl records, books, jewels, clothes, and everything else you can imagine; true to its 1910 purpose, this square remains an Athens flea market for second-hand goods and it looks exactly like it must have looked 100 years ago.

Come here on a Sunday to make the most of your visit, as it's on that day that the giousouroum is most active. If the atmosphere here suits you, make sure to try the local cuisine in the nearby picturesque Café Abyssinia, with live music on the weekends. And if your love for second-hand clothes and accessories goes deep, cross Ermou street for a visit to Kilo shop and Concept Store, where bargain meets style.

Thus, our guide for Athens squares is complete. We hope this will prove a good introduction not just to the six squares we presented but to the surrounding area, the history behind and the modern aspects the Greek capital has to offer you.

If you are interested in a tour through Athens including not only all of these squares but also much other sightseeing of the city, join our Athens tours, such as Best of Athens Tour: Acropolis and city tour or our Highlights of Athens Evening Tour,  for an unforgettable experience!

More in this category: « 5 Things to do in Athens at Night || The awe-inspiring Athenian Trilogy: the National Library, University of Athens and The Academy »
back to top