As a UNESCO World Heritage Site, Nea Moni is a medieval monument that reflects boundless creativity, humbling sanctity, the human genius and the consequences of fanatic destruction, all in once. Follow us on the island of Chios and discover the intriguing story of this monastery, a monument bestowed from the Byzantine Era to the rest of the world.

1. The begginning of the story

Located at the central part of the island, the monastery of Nea Moni stands as a guardian of Christianity for almost a thousand years. As a fine example of imperial architecture, hosting some of the most exquisite mosaics of the medieval world, this monastery is protected by the Unesco network as a World Heritage Site and operates as a time-machine for the modern traveler. The story of the site starts in 1034 CE, when saints Nikitas,  John, and Joseph, lived together as eremitic monks on Chios island. One night, they noticed something rather peculiar in the still of the night;  a source of light coming straight from the middle of a dense forest. Intrigued by it, and after having observed it for quite some time, they decided to investigate the source of this light knowing that no one was living in the area.

During their first try, they entered the dark forest only to discover it was literally impenetrable. In order to reach this eerie sight, the monks decided to put the woods on fire. By burning down the dense vegetation, they could eventually make their way to their final destination. Few days after, they decided to try again only to witness a miracle in front of their eyes. They saw a myrtle tree completely unharmed by the raging flames and on its branches a holy icon of the Virgin Mary. The monks quickly took the icon with them after holding a mass on the spot. The next day, they woke up only to discover that the icon was missing. To their surprise, they traced it back on the branches of the same myrtle tree. Interpreting this event as a divine sign, the monks built a little church on the spot to host the precious relic (known as Palaia Moni - meaning old monastery). 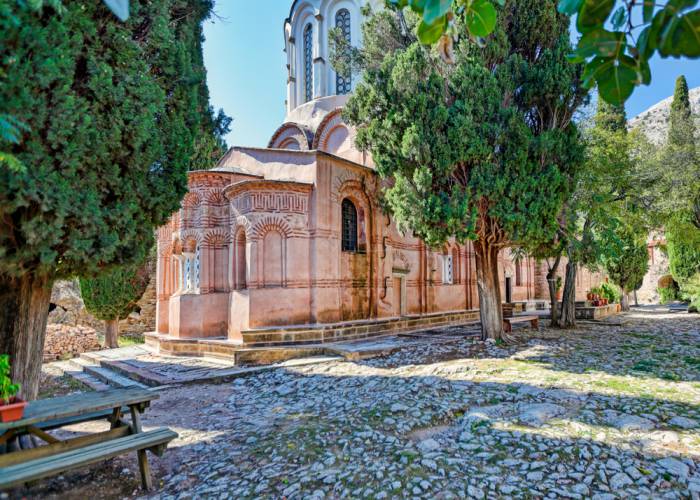 A few years later, one of the monks had a vision during his sleep. He claimed that Virgin Mary herself visited him and ordered him to find a Byzantine prince called Constantine Monomachos who at that time was in exile at the nearby island of Lesbos. According to this vision,  Constantine was to become the Emperor of the Roman Empire. Forced by this call, the monks traveled to Lesbos where they found the prince and told him everything about the vision. Constantine promised them if their sayings would come true he would grant them whatever they could ask for. As a token of this promise, he offered them his imperial ring of the Prince.

Soon after Constantine was crowned as the emperor (after having married Empress Zoe), the monks traveled to Constantinople (today's Istanbul) to remind him of his promise. By showing him his own ring, Constantine kept his word and started the construction of a new monastery in Chios (thereafter known as Nea Moni). He sent an army of architects, technicians, and workers from the imperial workshops of the capital with the order to create a magnificent monument. Unfortunately for Constantine, the monastery was completed only after his death with the help of Theodora Porphyrogenita. During his lifetime though, Constantine issued more than 10 imperial orders granting lands and privileges to Nea Moni. One of those decrees dictated that the monastery's abbot enjoyed the right to hold a pastoral staff and wear a holy cloak, as well as the privilege of being liable for his actions only to the Patriarch of Constantinople. Legally, the monastery and all of its lands were under the personal protection of the emperor, something that lasted until the fall of the Byzantine Empire.

According to some medieval sources, the emperor let the monks choose the design of their new monastery from the abundance of churches existing in the capital, specifically excluding the Hagia Sophia. The monks chose the church of Hagioi Apostoloi Mikroi and the emperor kept his promise by building and decorating their church with enormous wealth. The surviving mosaics, although exquisite pieces of medieval art, can only reflect a fraction of the original decoration of the church. Apart from the sophisticated design of the church of the monastery, an all-marble cistern was constructed as well, with a parallel existing in Constantinople, known as the Underground Palace. The written sources describe of a monastery  of a 1000 monks that had under its control the ⅔ of the whole island of Chios. In addition, many holy relics were protected inside the monastery's premises such as the heads of St. Euthymius, St. Phillip, St. Eustathius and Apostle Timotheus, the thumb of John the Baptist, and part of the holy relic of Theodore of Amasea.

The first major hit to the monastery happened in 1300 when Saracen pirates raided the island of Chios. Later on, during the Latin rule, most of the land and fields of Nea Moni were taken away from its control, and many of its holy relics were transported to monasteries and churches of western Europe. Only after the Ottoman occupation of the island, the monastery managed to recover financially. The Ottomans respected its long tradition and the imperial decrees of past Byzantine emperors for a very good reason. Nea Moni proved to be quite a profitable religious institution and a constant money supplier to the imperial treasury. Despite those events, the largest destruction that almost ruined the monument happened in the 19th century. After the start of the Greek War of Independence, Chios participated actively in the War by offering its commercial fleet. The Ottoman reaction to that was the sending of a brutal force to suppress the revolution. They started killing everyone in sight after the order of the Sultan and the inhabitants tried to find refuge behind the fortified walls of the monastery. With the excuse that armed men were hidden inside the premises of Nea Moni, the Ottoman army bombarded the monastery and burned it to the ground only after killing every single monk and person found there. Later on, they systematically looted the building stripping away Nea Moni from any valuable object and by destroying through fire the holy relics. In addition, an earthquake in 1881 made the dome of the church to collapse destroying many of the medieval mosaics.

A Byzantine mosaic icon in the interior of  Nea Moni, Chios - credits: tolgaildun/Shutterstock.com

After 1947, many restoration programmes reconstructed parts of the medieval monument and saved what was left of it. Despite the destruction, the visitor today stands in awe in front of the magnificent medieval building by gazing at the shining mosaics depicting scenes from the life of Jesus and many more. The style of the figures and the early use of perspective in religious Art are only some of the reasons that Nea Moni is a valuable monument to the world. Today, operating as a nunnery, the visitor has the chance to visit its premises, dive into the history and sanctity of the place and check from up close some of the medieval relics, treasures and manuscripts that survived all this destruction.

Nea Moni is a medieval treasure and one of the 18 Greek archaeological sites protected by UNESCO. So, if you find yourselves in Chios do not miss the chance of visiting it. If not, plan your own trip to Chios or perhaps check out one of our Greece tours.

1. The begginning of the story