When you’ve finally pulled the trigger and booked your dream destination to spend your much-needed vacations on, the last thing you want to do is return back home only to realize that you didn’t explore its full potential and that you didn’t get to see and experience all you could have! Rid yourself of that possibility by reading below all the top sites of Crete. Get a well-rounded idea of what you must not miss during your visit to the biggest Greek island and ensure your vacations in Crete will be your most memorable yet.

5. Venetian Port and the Old Town of Chania 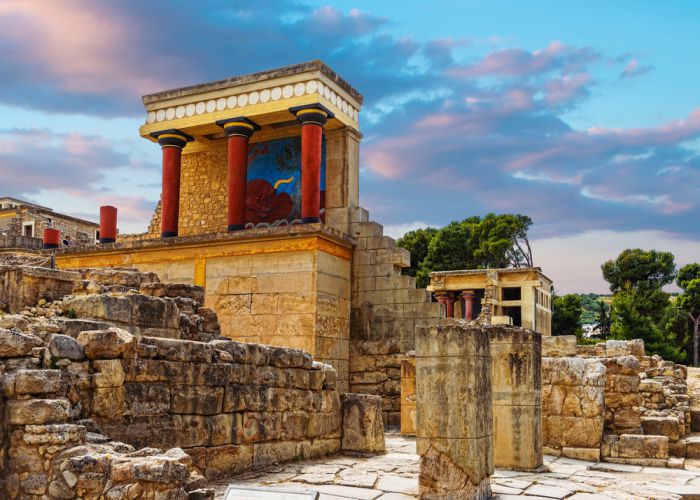 Let’s start with the obvious. Knossos Palace is the largest and most impressive Minoan site, spread across 22,000 sq.m., and it used to serve as the administrative center of the Minoan civilization, 5 km southeast of Heraklion. The first palace was built around 2000 BC and according to tradition, it was the seat of King Minos. The palace of Knossos is divided into different sections, each of which used to have a separate use. It was multi-storeyed, built of chiseled structures and decorated with miraculous frescoes depicting possibly religious ceremonies. The access was through three entrances to its north, west and south sides. The first excavations in the area of ​​Knossos were carried out in 1878 by the merchant Minos Kalokerinos. When Crete was declared independent in 1898, and following several other excavation attempts, a law was adopted that declared all antiquities state property. When you visit Knossos Palace, you can’t help but notice the intricate architecture and evident historical value! 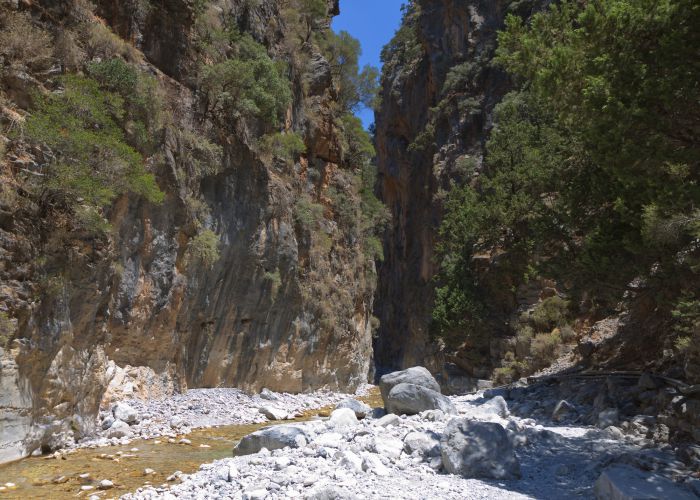 Not for the faint-hearted, Samaria Gorge is one of the largest gorges in Europe and one of the most popular destinations in Crete, especially for nature and fitness lovers worldwide. Proof comes in the numbers, as roughly 250,000 to 300,000 visitors cross it from early May to October each year. The 16-km hike to the Samaria Gorge starts at Xyloskalo on the Omalos plateau, 40 kilometers from the city of Chania, and ends after a 6 to 8-hour hike on the southern coast of Crete to the Libyan Sea. The impressive trail passes by cliffs and dense forests with rare flora and fauna, some of which are exclusive to the Cretan land. But awestriking landscapes are not the only things that a hike through Samaria Gorge offers. On the way to the seaside village of Agia Roumeli, the trail passes through abandoned settlements with a history lost in the depths of centuries. The most striking part of the famous gorge, is the "Doors", the narrowest point in the canyon with a minimum width of 3.5 meters, a length of 12 meters and vertical walls about 100 meters high. It offers the perfect setting for top-quality photos, so take a break and click away to your heart’s content! 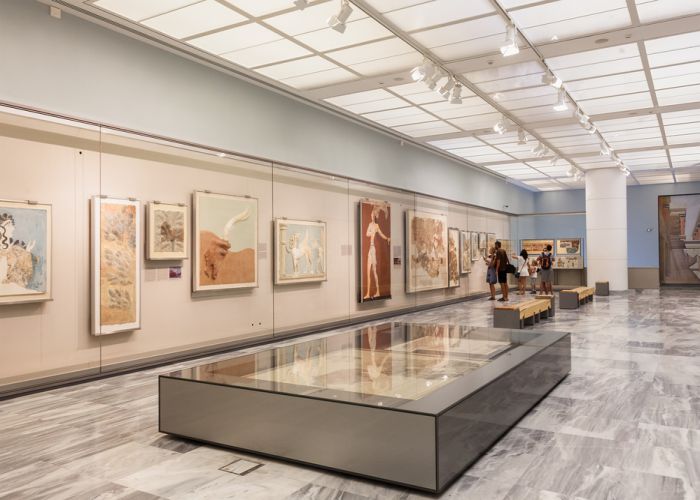 If you take pride in being a rather cultured traveler, then the Heraklion Archaeological Museum should be a must-visit site in your itinerary. The Archaeological Museum of Heraklion was founded in 1908 to host the first collections of Cretan antiquities that have since been rapidly enriched. It was rebuilt in the 1930s and was characterized as an innovative example of the modern architectural specimen. After its final renovation in 2014, the exhibition occupies a total of twenty-seven halls. Its exhibits cover a period of seven millennia, from the Neolithic period to the Roman times. The collections are structured chronologically and thematically and accompanied by surveillance media and introductory texts. The famous Minoan art is displayed through thousands of exhibits. At the same time, burial findings reveal beliefs and practices related to posthumous life, while findings such as ornaments, mosaics, and inscriptions indicate prosperity and reflect images of life. Coinage developed in a separate section attests to the prosperity of cities and the activity of the Cretans as mercenaries in the eastern Mediterranean. 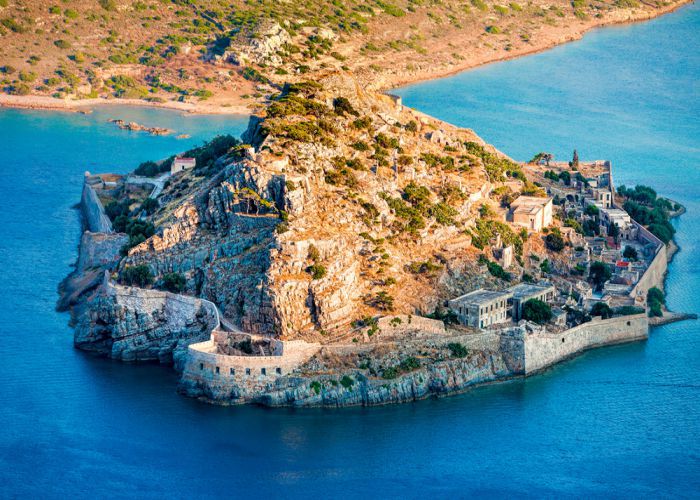 With a dark yet fascinating past and often referred to as ‘the island of the living dead’, Spinalonga is definitely a site worth visiting, not so much for its staggering beauty, as the island itself that lies at the natural harbor of Elounda in the prefecture of Lassithi in Crete is a small barren island of 85 acres, but for its  long history and the importance it holds to the locals. The island, which actually became an island following the destruction of the peninsula by the Venetians in 1526, has been inhabited since the mid-15th century. However, it became famous in recent history worldwide as the host of the leper community from 1903 to 1957, and as one of the last active leper colonies in Europe, reaching a number of nearly 400 inhabitants during the outbreak of the illness. Under inhumane conditions and heavily ill, the lepers managed to build a community and make a life for themselves. The captivating story of Spinalonga has been told in a book by author Victoria Hislop -which is certainly worth a read-, while it even became a series in Greek television. Nowadays, Spinalonga has left its tainted past behind and it is the second most visited archaeological site of Crete after Knossos!

Venetian Port and the Old Town of Chania 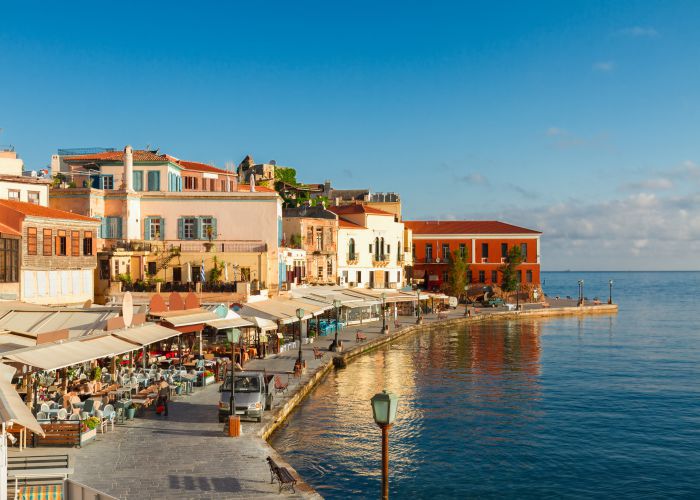 Chania is a city on the northwest coast of Crete, known for its picturesque port, magical old town, and heritage, which is evident in everything you turn your eyes on. Fun in its diversity, the city of Chania offers everything one could possibly want; from vibrant nightlife and relaxing beaches to museums of significant historical value and archaeological sites that make history-lovers lust after it! The Old Town of Chania is nothing short of breathtaking. The narrow alley will lead you to scenic neighborhoods, cozy cafes and restaurants and a selection of shops to buy bits and bobs from. On Karaoli Dimitriou Street, you can even find authentic Cretan knives, famous across the whole of Greece! The Venetian port is no less extraordinary. During the 14th century, Venetians built this magnificent port which is surrounded by the Old Town of Chania. There, you can gaze at the Venetian Lighthouse, overlooking the Mediterranean, and catch the sunset in order to take in the impeccable view of the sea marrying the sky in an explosion of colors.

On your trip to Crete, one thing is for sure: you will get to combine culture, nature, and fun in a unique landscape! Pack your bags, follow our advice and success is guaranteed! 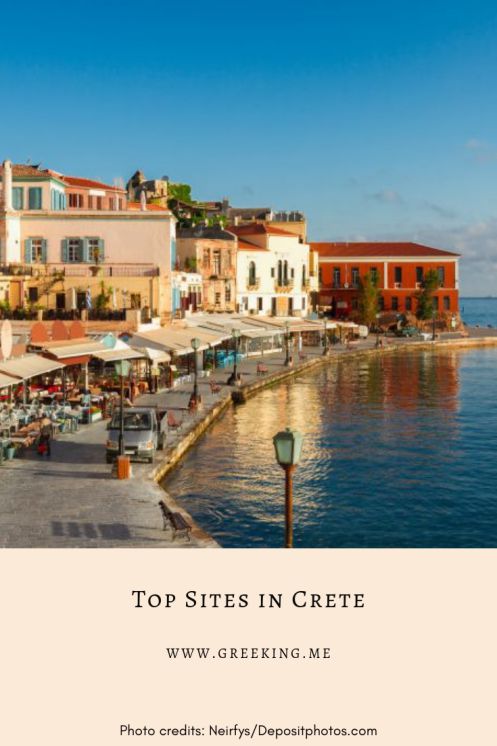 More in this category: « The Story of Spinalonga, the Island of the Lepers in Crete || The Wine and Olive Oil Tradition in Crete »
back to top

5. Venetian Port and the Old Town of Chania