The oldest house in Athens tells a story of the life of Athenian aristocrats before the Greek revolution and paints a picture of their traditions and habits. That being said, there is another story that this old house tells: one of great humanity and faith. It is a story of a Greek woman who faced all the possible challenges but was determined to fight for what she believed in and protect the vulnerable who had no means of defending themselves.

1. The oldest house in Athens

The Benizelos Mansion has been identified as the oldest house in Athens and is located in Plaka, Athens’ beautiful old town and historical center, at the foot of the ancient Acropolis. This mansion was built in the 16th century and is a testament to the eloquent architecture that the Ottoman Empire brought along with its occupation. Today, the mansion has been restored and turned into a museum which is open to the public four days of the week. You can see details about opening hours on the official website.
Tip: You can visit the Benizelos Mansion in one of our tailor-made Athens tours. 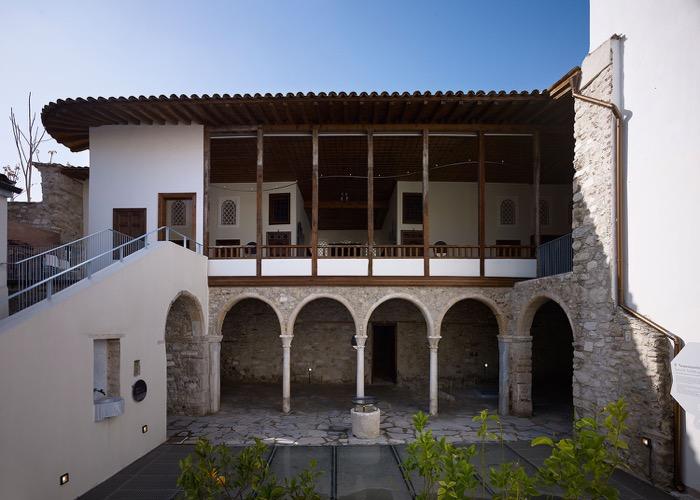 The whole building is an exhibition which maintains elements of many different eras. For example, archeologists found the remains of the Roman City Wall 15 ft under it! It is a great example of Ottoman-style architecture with a loggia, open outdoor archways, marble archways and T-shaped verandas, an interior yard with a well and an olive press. It is a two-story building which was overtaken by the Greek Ministry of Culture in 1972 and was given to the Holy Archdiocese of Athens in 1999. The European Union funded this project and enabled it to be fully restored and made into the cultural museum it is today. Not only is the mansion beautiful, but it has a rich religious and cultural history, making it a fascinating place to visit.

The house’s first occupants were Angelos Benizelos and his wife Syrigi Palaiologina. The couple were Athenian aristocrats with Byzantine roots and were initially childless. However, in November 1522, Syrigi’s prayers to bear a child were finally answered and she gave birth to a girl. This little girl, born Revoula, later became the most famous resident of the oldest house in Athens, and a pillar of philanthropy, known as Saint Philothei. Revoula’s parents forced her to marry her abusive husband at the age of just 14 years old. She became a widow and an orphan at the age of 17 after her husband and parents passed away and she inherited a fortune. She was finally free to live the life of her choosing and she chose, from that point on, to take on a monastic lifestyle of prayer. Revoula adopted her new name, Philothei, which translates to 'a friend of god', when she established her first monastery. Today, the name Philothei is celebrated on the 19th of February, and the Athenian district of Filothei is named after her.

St. Philothei used her affluent background to create a number of charitable establishments such as schools -where she taught Greek Christian heritage-, hospices, elderly homes, and monasteries. These shelters served as a place of worship, but also as a refuge for Athenian, specifically female, slaves under the Ottoman rule. The Holy Martyr was also known for buying the freedom of Greek slaves, which put a target on her back for she outwardly defied the Turkish regime. St. Filothei was an exceptional woman and a real feminist; she had a particular concern for the quandary of her fellow women at the time, putting her own safety at risk. She provided a safe haven for young women and girls who were often victims of violence and injustice under Turkish rule. St. Philothei’s actions did not go unpunished. She was beaten and imprisoned by the Turkish Regime on multiple occasions but none of this held her back: she continued to defy the rulers by saving the young girls held in captivity and by teaching Christianity.

Eventually, however, at the age of 67, St. Philothei attended a church ceremony which was raided by Turks who seized her and beat her gravely. She was bedridden for 4 months before dying of her injuries; 10 years later St. Philothei was canonized and enlisted as one of the blessed and holy women of the Orthodox church. The Benizelos Mansion is now a standing reminder of St. Philothei, an extraordinary woman whose dedication to her people and to her faith cost her her life.

More in this category: « The awe-inspiring Athenian Trilogy: the National Library, University of Athens and The Academy || How to Spend One Day in Athens »
back to top

1. The oldest house in Athens