Heraklion, the capital of the Greek island of Crete, may not be your typical island destination, but it's a worthwhile and fascinating place all the same. Inhabited throughout the years by the Muslims, the Byzantines, the Venetians, and the Ottomans -not to mention the Ancient Minoan civilization- Heraklion is bursting with diverse sites of cultural and historical interest, waiting to be discovered.

1. Start your day with a nice walk and a boost of energy

2. Marvel at the Palace of Knossos

5. Discover the Historical Museum of Crete

We thought that it may be a great idea to describe the ideal one day in Heraklion itinerary, for those that have limited time when visiting Hearklion, so here it is: 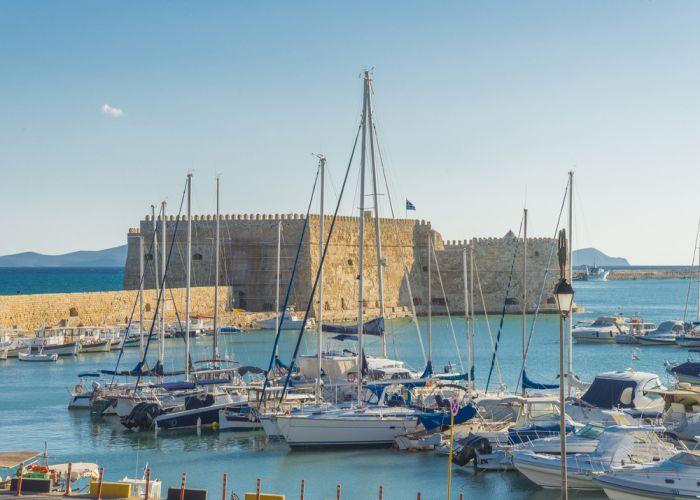 Wake up as early as you can -you're on vacation after all- and kick off your day in the charming city of Heraklion with a walk through 25th August Str., reaching Heraklion’s Venetian walls, where you can enjoy a morning stroll before your breakfast.

Cruising along the Heraklion Walls, you can witness the past and present of Heraklion merge into one, filling the modern city with their old-time beauty, while carrying strong recollections of the memorable past.

You can experience the riches of the Cretan cuisine through a luscious breakfast in 'Think Tank', a trendy coffee shop with mouth-watering breakfast options, or through a local pastry from a traditional Cretan bakery, such as 'Veneris bakery', which has kept both locals and visitors well-fed since 1967.

Alternatively, If you wish to enjoy a leisurely walk in the historic center and indulge in the local cuisine at the same time, consider taking a Heraklion For Foodies tour, where you’ll have the opportunity to taste some of our favorite Cretan recipes.

Marvel at the Palace of Knossos 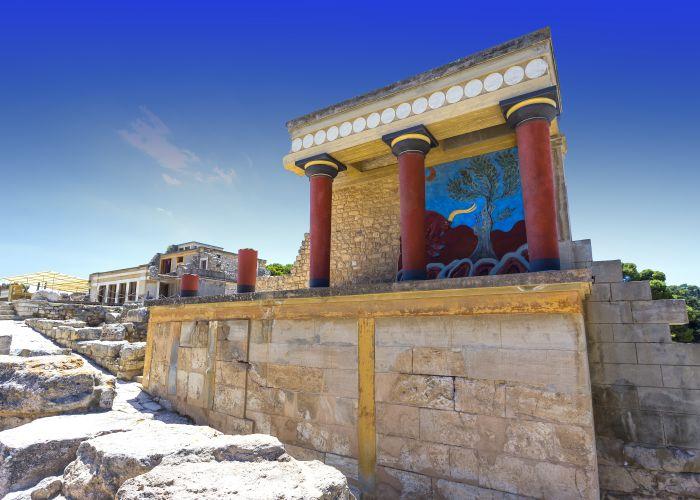 Following your breakfast experience, it’s time to delve into the history and culture of Heraklion, which is even richer than Crete’s world-acclaimed gastronomy. The Minoan Knossos palace is located 5 km southeast of the city of Heraklion, built on the hill of Kefalas. It is the most famous archaeological site in Crete and exhibits Crete's history at its best.

It is the most important example of the Minoan civilization, which peaked from approximately 1700 BC until 1450 BC. Knossos Palace was allegedly home to King Minos, the first King of Crete, son of Zeus and Europa. There are a number of well-known Greek myths linked to the palace of Knossos, such as the tale of Minotaur’s maze and the tale of Daedalus and Icarus.

The city of Knossos was inhabited from the Neolithic to about 1350 BC. The resurrection of the palace of Knossos first began with an initiative from Greek art historian and archaeologist Minos Kalokairinos in 1878 and concluded between 1900-1935, when English archaeologist Arthur Evans came to Knossos with his assistants and began the excavations, which lasted for 35 years and uncovered the majestic palace.

The palace of Knossos had multiple levels and covered approximately 20,000 sq. meters. Its aesthetic value lies not only in its impeccable architecture, but also in its building materials, its colorful facade, and, of course, the famous frescoes decorating the rooms.

Knossos palace has also helped modern Greeks understand the extent of the architectural and technological knowledge of the Minoans, with the drainage and water supply network of the building offering examples of construction genius. Keep in mind that the palace of Knossos is 20' from Heraklion’s city center and therefore, you will need transportation to get there. 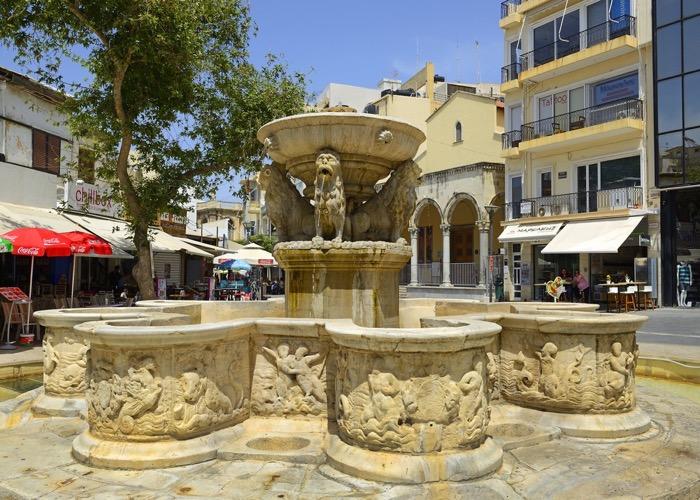 Having experienced a heavy dose of Cretan history, it is time to spend your evening and night relaxing and exploring the bustling city center of Heraklion. Heraklion is the largest city in Crete and the 4th largest city in Greece. Due to its size and diversity, it covers all tastes and needs of both visitors and locals alike, with its monuments being the remnants of the first civilization of Europe.

Along the length of Heraklion’s harbor, you will come across the first great monument, Loggia, the impressive building that today houses the City Council and part of the Heraklion City Services. Loggia, which was the Club of the Duke and the officials of Crete, is considered to be the most elegant Venetian monument, which in 1987 won the first ‘Europa Nostra’ award as the ‘Most Well-Restored and Preserved European Monument of the Year’.

South of Loggia, lies the Cathedral of Crete, the church of St. Mark, built in 1239, which today houses the Municipal Art Gallery of Heraklion. Within a few meters of the church, there is the ornate fountain known as ‘Lions’ with its exceptional sculptural decoration depicting the animal kingdom.

It was built in the 17th century by Francis Morozini to decorate the square and to offer much-needed water to the people of Heraklion. Southwest of the Lions Square, lies the Medieval Monastery of Saint Catherine, which was the Cretan University of the Middle Ages, and introduced a number of European artists, philosophers, ecclesiastical fathers, poets, and writers to the world.

Today, Saint Catherine houses a rich and great collection of paintings of Cretan Hagiography. After visiting all the important sights of Heraklion’s city center, indulge in local meze and raki in a traditional Cretan tavern. ‘Paradosiako’ and ‘Peninta-Peninta’ are both excellent choices for you to try local dishes following the recipes that have been passed down through generations, made with local ingredients. Your day will come to an end on a high note, having experienced Heraklion to the fullest!

From Heraklion: Dance and Eat Like a Local in Crete
LEARN MORE
BOOK

Even if your time is limited to less than a full day, you should not skip a visit to the Venetian port in Heraklion and walk along 25th August Str. This street starts at the port and leads you to the city center. You’ll need a solid two hours to pace yourself and spend a decent amount of time at each attraction, but most of the major landmarks are along this route, so it’s a good way to take in all the city sites at once.

If, however, you want to experience the city in an effortless, alternative way, you can join us on one of our tours that will give you the opportunity to see the city from a local’s point of view! Taking it a step further, you can even book a specially designed tailor-made tour that will suit all your individual needs and desires!

Below you can find more inspiration and ideas for our most favorite things to do in Heraklion:

Go back in time to the period of the Venetian rule with a walk down the harborside, where old Venetian shipyards, ramparts, and the 16th century Koules Fortress still remain. It’s the most scenic walk in town and there are plenty of cafes and restaurants along the promenade to sit and take in the beautiful view. To get a real money shot for Instagram, you can climb the roof of the fortress and take a selfie with the striking Cretan sunset in the background.

Discover the Historical Museum of Crete 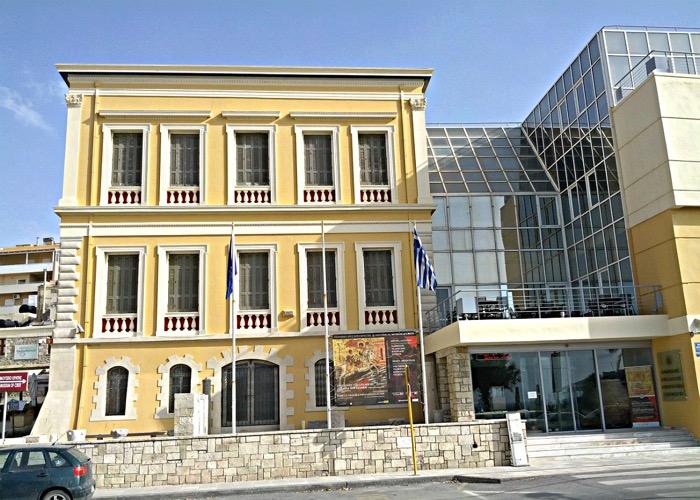 Located in a restored mansion, the Historical Museum of Crete contains archaeological items spanning 1.700 years of history on the island, from early Christian times to the modern era. Considering the number of empires that ruled Crete throughout time, there is a lot to see. Following your tour around the museum's exhibits, don't leave without visiting its tranquil Garden Cafe! Another museum worth visiting is the Natural History Museum. It has been functioning and operating under the framework of the University of Crete since 1980. Visitors of the Natural History Museum can learn about the natural environment of the eastern Mediterranean area with special emphasis on Greece and Crete. 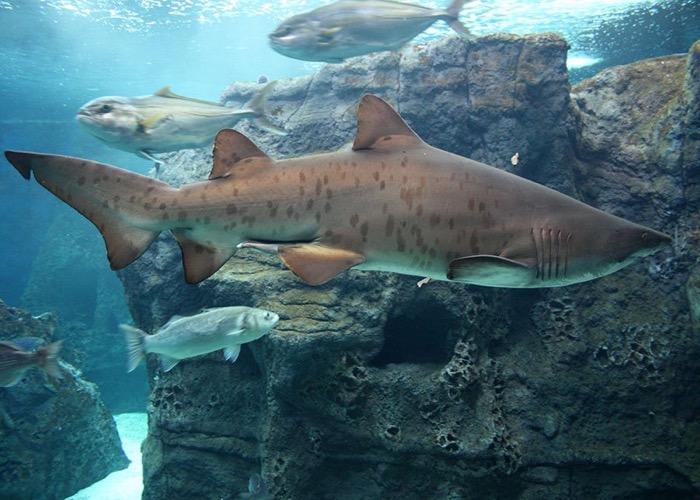 Crete’s aquarium is considered to be one of the biggest aquariums in Europe, consisting of sixty tanks and 2.000 marine organisms. The most fascinating species of the Mediterranean Sea can be observed and admired here, like sand tiger sharks, flat lobsters, and sea turtles. The aquarium is located in the former American military base in Gournes, about 15 km from the city center, accessible by public bus.

Known as the fourth largest city in Greece, Heraklion is a crucial stop along a tour of Greece’s island cities. There’s more to it than meets the eye; all you have to do to discover it, is keep your feet in comfortable shoes and your eyes open!

Whether you decide to visit Heraklion with kids, alone, or as a couple, getting out of your luxury hotels -or even budget hotels- and spending time in Heraklion -even if it is limited to a day or less- is a decision you won’t regret. Let the history, culture, gastronomy, and old-time charm of Crete’s capital bewitch you and we promise your first time in Heraklion won’t be your last!

1. Start your day with a nice walk and a boost of energy

2. Marvel at the Palace of Knossos

5. Discover the Historical Museum of Crete