The ancient open Theatre of Epidaurus dates back to 4th century BC and is located in the lush hills of the Peloponnese, just a 30-minute drive from the Saronic Gulf. As one of the many UNESCO World Heritage Sites in Greece, it is undeniably unique for a multitude of reasons.

It is argued that the Theatre of Epidaurus is the grandest and best-preserved in all of Greece, making it a must-see for travelers who come to Athens (Epidaurus is only 2 hours away from Athens!). Although the Theatre is most definitely the highlight of the area, the city that surrounds the Epidaurus Theatre is also an exemplary archeological site, with a gymnasium that is recently excavated and a museum with beautiful works of art like statues and replicas.

This vast theatre, which seats up to 13,000 spectators, is situated within the archeological site of the Sanctuary of Asclepius, which is dedicated to the ancient Greek god of medicine. The area was a healing ground, a place for physical and spiritual tranquility that perfectly aligns with the landscape that surrounds Epidaurus. As you climb to the top tier of the theatre to test the unrivaled auditory system, you will look out to the horizon onto a view that will take your breath away.

The theatre was designed by the architect Polykleitos the younger, from Argos, whose achievement is considered a masterpiece 2,500 thousand years later. Perhaps what makes this sacred place a modern miracle is that the acoustics are still superb, and the architecture is an artistic phenomenon, even by today’s standards. The European Acoustic Association also released a study that measured and analyzed the acoustics of the Ancient Theatre of Epidaurus using modern equipment. The researchers concluded that the acoustics are excellent for all listener positions in the theatre. 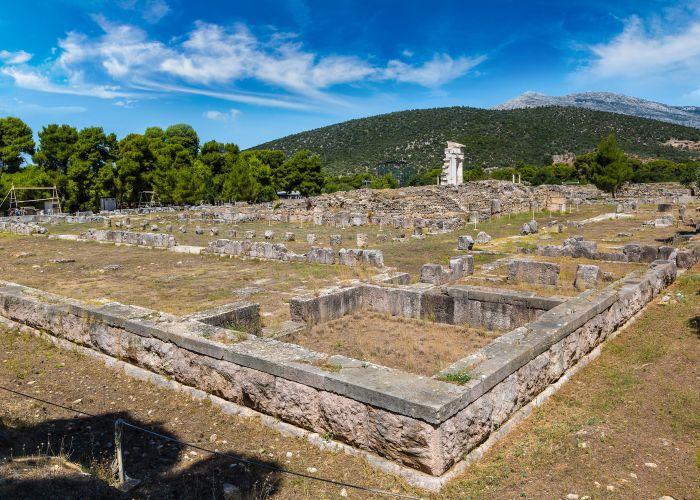 It is known that spectators at the top tiers can hear performers at the bottom without any amplification. Indeed, although the theatre itself still preserves 90% of the original material and ancient form, the sound from the middle of the theatre reaches the top rows without much loss of intensity.  Initially, it was thought that this was due to the location of Epidaurus, which lies in a small valley in between lush Peloponnesian hills. However, it was later discovered that the true reason is far more to do with the expert engineering skills of Polykleitos.

The Journal of the Acoustical Society of America has verified through a numerical study, that the seats play a crucial role in this. The seats are made up of a corrugated surface which acts as acoustic filters that pick up sounds from the theatre instead of surrounding sounds of the environment. Polykleitos had a great understanding of how to apply corrugated surfaces but also, the mere design of Epidaurus, its dimensions, and proportions, also optimize every aspect of it. This combination of details and expert engineering has resulted in the best conserved ancient theatre, of its kind, in the world.

The theatre is in such good condition, and was so well-designed, that annual festivals take place there to this day. The Athens-Epidaurus Festival is an annual arts festival that takes place in the theatre itself every summer. The program each year consists of music, theatrical shows & dance events among many others. The festival was founded in 1955 and has been a huge cultural attraction ever since.

This theatre is also one of the very few that still has its original circular “Orchestra” in the middle, which you should not forget to stand on when you visit! As you stand on it, speak and you will experience the profound acoustics for yourself. You will be able to hear your voice in a stereophonic manner - send a friend up to the top tiers and test it out! The fact that this ancient theatre can still effectively facilitate such events is astonishing; sitting in the crowd will give you a glimpse into antiquity as you will be sitting exactly where the ancient Greeks did in the 4th century B.C! The functionality of Epidaurus is what makes this ancient site a modern miracle.

The acoustics of Epidaurus theatre

The incredible acoustics of the Epidaurus ancient theater have been a topic of discussion since the beginning of the theater’s life. It is said that people sitting in the furthest back row can hear the performers just as well as someone sitting a breath away from the stage. At first, the unmatched acoustics of the theatre were attributed to its location, built on the slope of Mount Kynorthio at an incline of 26 degrees. However, the Georgia Institute of Technology discovered in 2007 that while the location plays a significant part, the real reason lies in the seats themselves.

The stone steps filter the background noise and create a phenomenon called ‘virtual pitch,’ which enhances the clarity and quality of sound. Additionally, the distance between the rows of seats diffuses the sound everywhere with the same intensity. Other factors include the sound bouncing back from the hard, compact surface of the orchestra and the theater stands, the good quality marble used, the quiet scenery, and the constant breeze blowing from the orchestra to the viewers.

Impressive due to its immaculate symmetry and allure, the ancient theatre was in full use at least until the 3rd century AD, worshiping Asclepius through musical and theatrical events. Supporting the belief that dramatic shows were beneficial for both mental and physical health, the great theatre of Epidaurus was also used for the healing of patients from all over Greece.

The theater was eventually destroyed in 395 AD when the Visigoths occupied the Peloponnese. In 426 AD, Eastern Roman Emperor Theodosius shut the sanctuary down, forbidding all pagan activities across Greece, while the site suffered major destructions following a series of earthquakes, which deemed it permanently unusable.

In 1881, the first organized effort to excavate the ancient theater of Epidaurus was initiated by the Archaeological Society, with archaeologist Panayis Kavvadias as the director. With a great effort from Kavvadias and the Preservation Committee for Epidaurus Monuments, the theatre was almost fully restored, apart from the stage building that could not be salvaged.

The first play that the ancient theatre of Epidaurus hosted in modern times, was Electra, the famous ancient tragedy written by Sophocles. The play was performed in 1938, starring Katina Paxinou and Eleni Papadaki, two of the most emblematic Greek actresses of all time.

During World War II, all performances came to a halt. In 1954 however, they began again in the context of an organized festival, which was established as an annual event for ancient drama in 1955, known as the Epidaurus Festival.

Today, almost 2359 years after its foundation, the striking monument still attracts visitors from all over the world, looking to experience its charm through ancient drama performances. The festival of Epidauros continues, taking place during the summer months, with famous Greek and foreign actors who have appeared through the years, including the world-renowned Greek soprano Maria Callas, who performed in 1960.

How big is the Epidaurus Theater?

The theater consists of the circular orchestra, the place where the actors and the dance played, and the 'koilon', the semicircular part around the orchestra -named after the dance that sang and danced- where the seats for the spectators are located. The 'koilon' is divided into two moldings, the upper with 21 rows of seats for the people and the lower with 34 rows of seats for priests and lords. The orchestra has a diameter of 20 meters and is surrounded by a special underground sewer, 1.99m wide to remove rainwater flowing from the 'koilon'.

A lot has been said and written about the supreme form of art of ancient Greek theater over the centuries, but one thing is for sure: ancient drama touches your soul, teaching you invaluable lessons for human nature. So, if you consider yourself a theater lover, visiting is the ancient theater of Epidauros isn’t optional, it’s mandatory for your cultural health. A treat for both body and soul.

Grab the opportunity for a day trip to Argolis and experience first-hand the ancient theater of Epidauros, the site closely related to the birth of the drama in ancient Greece. Top tip: if you’re traveling with kids, take a Percy Jackson-inspired tour around ancient Corinth and Epidaurus, and keep your little one entertained with the mythical adventures of their favorite book hero!

If you’d like to watch a performance in the great theatre of Epidaurus, you can find the schedule of the Epidaurus Festival for 2019 and more info here. 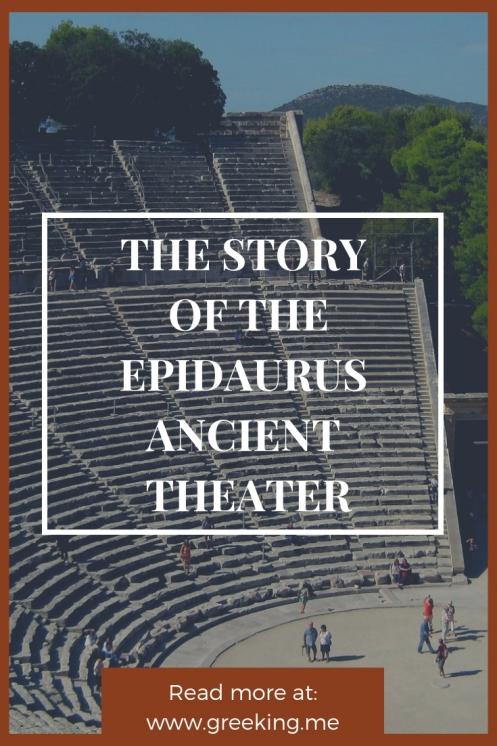 More in this category: « Peloponnese: The definitive travel guide || Top Things to Do in Argolis »
back to top