Follow us on a trip to Nafplio, one of the most historical and romantic cities of Greece. Our ultimate Nafplion Travel Guide will introduce you to the history of the city and guide you through the plentiful monuments and attractions Nafplio has to offer!

6. The fortress of Palamidi

8. The church of Agios Spyridon

Just 2 hours away from downtown Athens, at the northeastern part of Peloponnese at the shores of the Argolic Gulf, lies the city of Nafplio, perhaps the most important provincial city of Greece. For those who want to experience a different side of the country, Nafplion is the ideal destination combining history with idyllic beaches and a picturesque urban environment.

According to ancient Greek mythology, the city was founded by the hero Nauplius (the Seafarer). He was the son of Poseidon and Amymone, a great explorer that discovered the constellation of Ursa Major. According to the myth, he was the founder of the ancient port of "Nauplia" at the shores of the Argolic region.

Interestingly, the city is being mentioned in the funerary inscription of the Egyptian Pharaoh Amenophis III (14th century BC)! Nafplio has a vast history, situated in an area of continuous human habitation from prehistoric times until today.

As an important trading center overlooking the sea passages of the central Aegean Sea, many decided to control the city for their own interests. Today's visitor can see the history of Nafplio unraveling in front of his eyes just by having a walk around its alleys and streets. Join us and let us show you some of the best things to do in Nafplio. 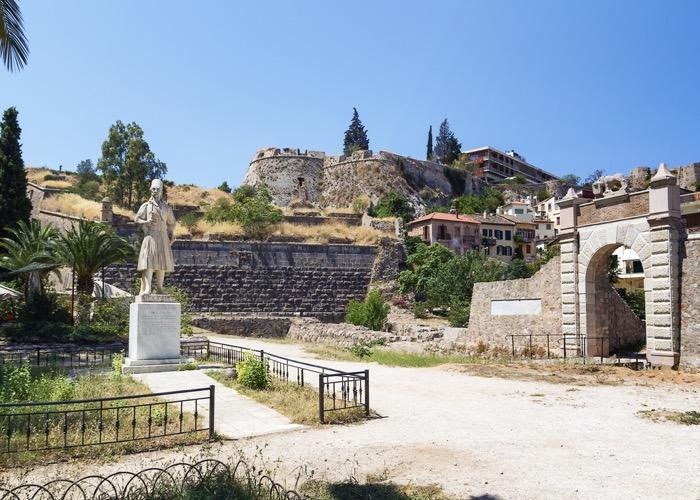 The Republic of Venice, always had a special connection to the city of Nafplion, starting as early as Byzantine times. The importance the city held for Venice is evident everywhere in the city. The impressive Venetian ruins of the different castles and fortifications made for the defense of the city, prove how much the Venetian occupants cared for the security of this port.

Start your exploration from one of the remaining Venetian gates leading to the medieval city situated close to the main bus station of Nafplio. The gate is known as the Land Gate and even though the walls are nowadays in ruins, the visitor can still imagine how the area used to be like.

Just before the gate, a deep trench was used to secure the inaccessibility of Nafplio in case of a siege. A small retractable bridge, open from dawn to dusk, allowed the inhabitants to access the walled old city. Architecturally, the gate is an ashlar stone arch, flanked by tower-like pilasters and crowned with the symbol of the Venetian Republic, a winged lion.

The crest of the Venetian Grimani family completes the decoration of the Gate. Originally built during the first Venetian occupation of the city, the form it has today dates back to the beginning of the 18th century when it was redesigned by a French engineer. Numerous warfares resulted in the partial demolition of the gate but today, after an extended restoration program, the site stands as it was when first built. 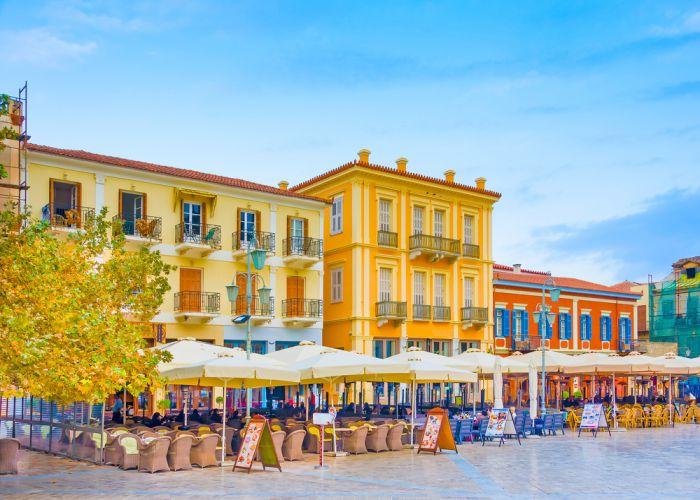 Just like the Syntagma Square in Athens, the main square of Nafplio commemorates the provision of a Constitution (1844), which limited the power of the King and controlled its authority. This need for fundamental principles that dictate the smooth operation of the state, was vividly expressed during the reign of King Otto that reluctantly satisfied the demand of the protesters in Athens.

Despite its name, the main square of Nafplio is much older than the one in Athens. Initially formed during the Second Venetian Occupation (1686-1715) it was named Piazza di Armi (Square of the Arms). After the Ottoman occupation, the square was renamed 'the Square of the Planetree' due to a huge tree existing in the middle of it.

After the liberation of Nafplio and the establishment of the New Greek State, it was renamed into 'Ludwig's square', honoring the Bavarian king, father of King Otto of Greece. Standing in the middle of Syntagma Square, you have the chance to see some important buildings all around it.

The largest one at the west with an open arched entrance is the Archaeological Museum of Nafplio. Originally built as the Armeria (Armoury) in 1713, a small plaque on its wall commemorates the name of general Sagredo, who decided the erection of the building.

At the center of the square, there is a black cube standing on a small pedestal that used to support a sundial. After the liberation of Nafplio, the square came to be the center of the government buildings of the modern Greek State during the time that Nafplio was the capital of Greece. 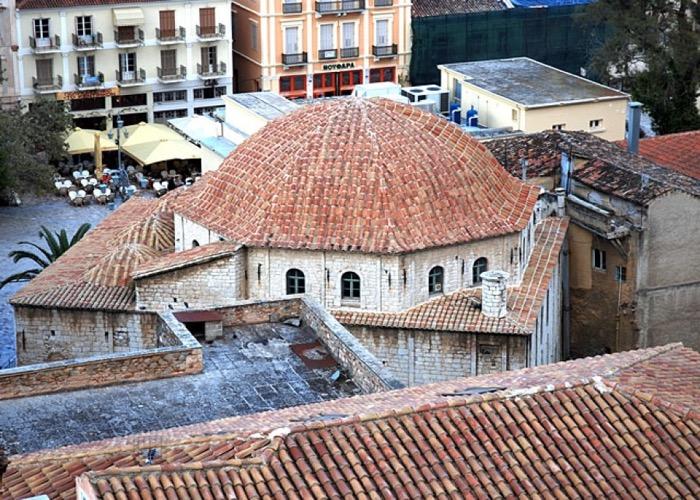 Right next to the Archaeological Museum of Nafplion, lies the building of the old Parliament. Originally built as a mosque, the old Parliament has a fascinating story. After the conquest of the city by the Ottomans, two Venetian brothers visited the city with the goal of discovering a treasure that their father had hidden during the siege.

Following a map, they located the treasure at the serai of the local Ottoman official (Aga) and after coming into an understanding, the brothers decided to share the treasure with the Aga. In the meantime, the Ottoman Aga changed his mind and murdered both brothers to keep the treasure for himself.

Out of guilt, he spent some of the treasure to erect a mosque, in an effort to soothe his conscience. From 1825 to 1826, the mosque was converted into the Parliament of Greece but during the coming years, it served as a school, a court, and a prison. Today, the building operates as a museum, the Municipal Gallery, with many events being held there.

At the east end of Syntagma Sq. the visitor can see the oldest mosque of Nafplio standing there since the first Ottoman occupation of the city (ca. 1540-1686). It is a fine example of Ottoman architecture and it always had a central role in the everyday life of Nafplians.

After the reconquest of the city by the Venetians, the mosque was quickly converted into a Catholic church dedicated to Sant' Antonio di Padova with the expenses of the Doge Francesco Morosini.

During the coming years, it was re-installed as a mosque but after the liberation of Nafplio from the Ottomans, it was used as a school. In 1915, it was remodeled to host a movie theater that was named "Trianon", the name that survives till today. It is one of the smallest theaters of Nafplio and if you have the chance, you definitely have to visit it while staying in the city. 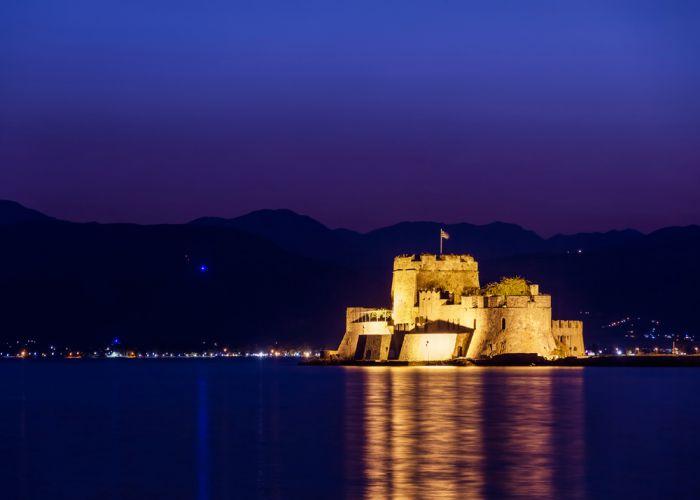 Recognizing its strategic significance, the Venetians decided to fortify the islet of St. Theodoroi by the time the first seized the city of Nafplio. Situated at the mouth of the port, the islet stands as a guardian, ensuring the security and accessibility of Nafplio's port.

A huge chain anchored between the Acronafplia fortress and Bourtzi (Castello Dello Soglio) was often deployed to block the entrance of the port in the case of a siege. The Ottomans used the islet likewise but after the foundation of the New Greek State, this was a prison and the seat of the state executioner (guillotine).

Floating in the middle of the port, Bourtzi came to be one of the most iconic sceneries of the city. From the 1960s up until the 1970s, the castle served as a luxury hotel but nowadays it is a museum offering a rare window to the visitor of the city's medieval past.

The fortress of Palamidi 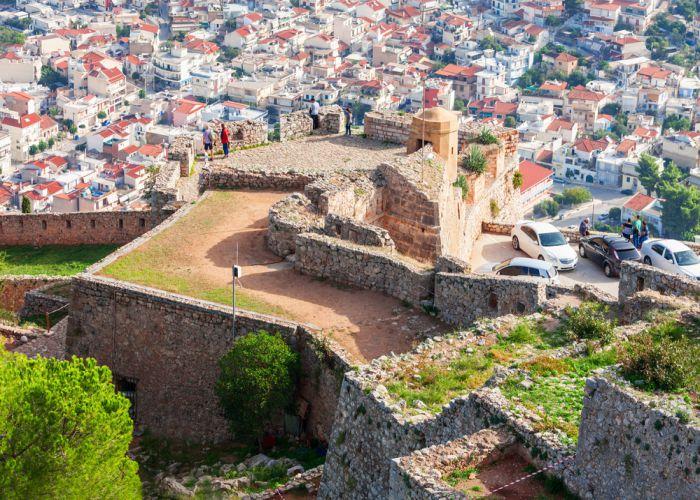 Part of an ambitious project undertaken by the Venetians, the hill of Palamidi is located in the south of Nafplio. According to ancient Greek mythology, Palamidis was the mythical son of Nauplius. Archaeological investigation on the hill found ruins from different time periods but the impressive fortress of the 18th century outshines everything else.

A typical baroque in style fortress, Palamidi overlooks the Argolic Gulf, the city of Nafplio, and its open plains. The Ottomans after a long siege succeeded in capturing the castle only to be replaced by the Greeks in 1822. This location remained to be part of the military life of the city, operating as a State prison.

The famous hero of the Greek War of Independence Theodoros Kolokotronis was held captive in the bastion of Miltiades for a short period of time. Today, the visitor has the opportunity to explore the fortress by following the over one-thousand-steps snaky trail leading to the highest point of the castle. 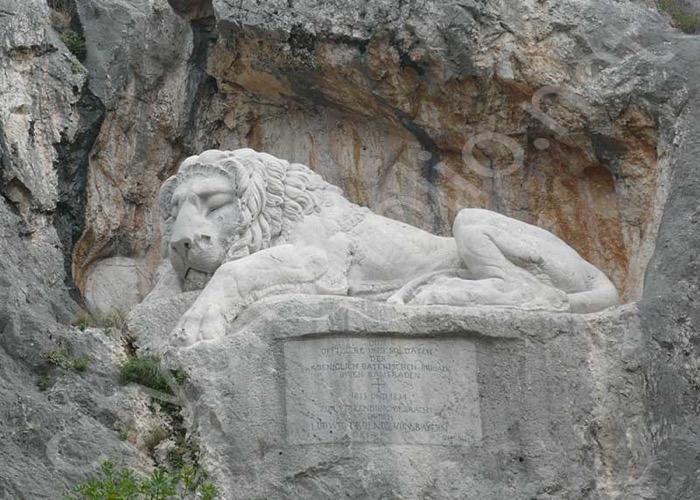 A work of the German sculptor Christian Siegel, the first professor of Sculpture of the Polytechnic School of Athens, the sleeping lion of Nafplio follows the idea of the famous lion of Lucerne. Commissioned by the father of King Otto of Greece, Ludwig I, it stands as a memorial of the Bavarian soldiers that succumbed to typhoid fever between 1833-4.

The church of Agios Spyridon

Located just one street before Syntagma Sq. at the center of the old town of Nafplio, the church of Agios Spyridon was built in the early 18th century by the Orthodox-Christian Greeks of the city. This church is known to every Greek because of an incident that sealed the fate of the New Greek State.

On the 27th of September 1831, the first appointed governor of Greece, Count Ioannis Kapodistrias went to the church according to Greek customs to participate in Sunday's Mass.

When he exited the church, two political opponents of his murdered him just outside of the door with a stab in the abdomen and a shot to the back of his head. The crowd, shocked at first, chased down the killers, lynching publically one of them and arresting the second one that was executed for treason.

The death of Ioannis Kapodistrias (ironically at the steps of the patron saint of his birthplace, Corfu) put an end to the reforming program of the new, poor Greek state and dictated the introduction of foreign rules to the political scene of Greece.

Nafplio is a city full of surprises and colors, monuments and sites that you definitely should not miss. Grab the chance and choose to engage in an insightful walking tour around the medieval town of Nafplio, plan your own trip to the city or check out one of our Greece tours.

More in this category: « An introduction to Olympia; a Small Town with a Vast History || Mani Peninsula Travel Guide »
back to top

6. The fortress of Palamidi

8. The church of Agios Spyridon