'On nothing, does Heaven bestow more care than Olympia' said Pausanias, the famous ancient Greek geographer, and traveler of the 2nd century AD! Follow us on a trip to ancient Olympia and learn why this corner of Greece was and still is the cradle of western civilization.

1. The founding myths of the Olympic games

4. The wonder of the Ancient World

At the meeting point of the two sacred rivers of Alfeios and Kladeos in Elis region in Peloponnese, lies the Panhellenic sanctuary of Olympia, according to some, the most important site of the ancient Greek world. Always considered to be a place of worship, Olympia was an active and vibrant sanctuary since the 10th century BC and continued to be inhabited until the late 7th century AD. By being the birthplace of the Olympic Games, a festival dedicated to the worship of Zeus, Olympia was the every-4-years meeting point of every Greek around the world, when they cast aside their differences, seized their warfares and feuds and were united under the protection of their father deity. But how important where these games for the mentality of those ancient people? The best way for us to understand it is through the various myths and events that happened there throughout the centuries and of course through the words of Pausanias that visited Olympia during the 2nd century AD.

The founding myths of the Olympic games 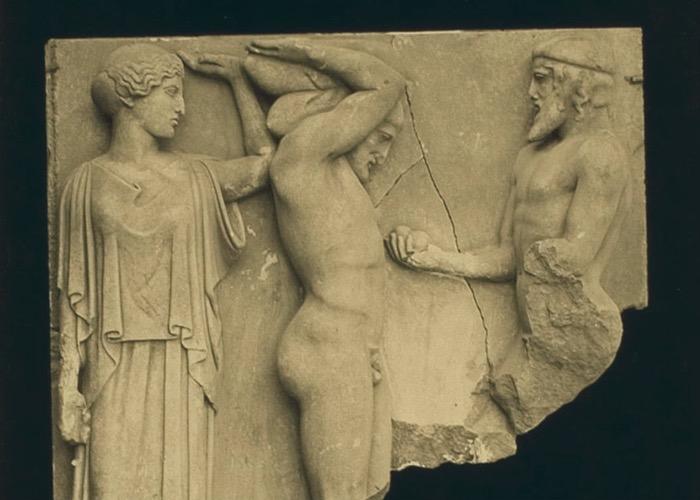 The Apples of the Hesperides Labor, metope of the ancient temple of Zeus, Olympia - credits: wikipedia.org

As mentioned before, the ancient Olympic Games were held every 4 years honoring the king of the gods, Zeus. According to Pausanias, there was an ancient Greek myth that claimed that the ancient inhabitants of Elis already had a temple at the site, dedicated to Cronus (Saturn) and held a festival for him. After the birth of Zeus, the Dactyl demons, Hercules (not the son of Zeus), Aeonius, Epimedes, Jasius, and Idas instigated a race honoring the birth of the divine infant. After the race, they were crowned with wreaths of a wild olive tree that Hercules supposedly brought from the lands of Hyperborea. This tree came to be the parent tree of the sacred olive grove of Olympia.

Another myth, mentioned by Pindar, says that the Olympic Games were firstly held by Hercules, the son of Zeus, after the completion of his Labours to honor his father. The one myth though that is closely related to not a god but a local hero is the one of Pelops. According to the myth, Pelops, the son of Tantalus, fell in love with Oenomaus' daughter, Hippodamia. Oenomaus challenged Pelops in a chariot race from the temple of Zeus in Olympia to the temple of Poseidon in Isthmia. If Pelops would be the winner, he could have Hippodamia as his wife. Pelops sabotaged the chariot of Oenomaus or according to other versions of the myth, Poseidon himself helped him to win the race. During the race, Oenomaus was killed and Pelops came to be the king of the area. This couple -Pelops and Hippodamia- were considered the forefathers of all Greeks, therefore the event was depicted at the eastern pediment of the temple of Zeus. 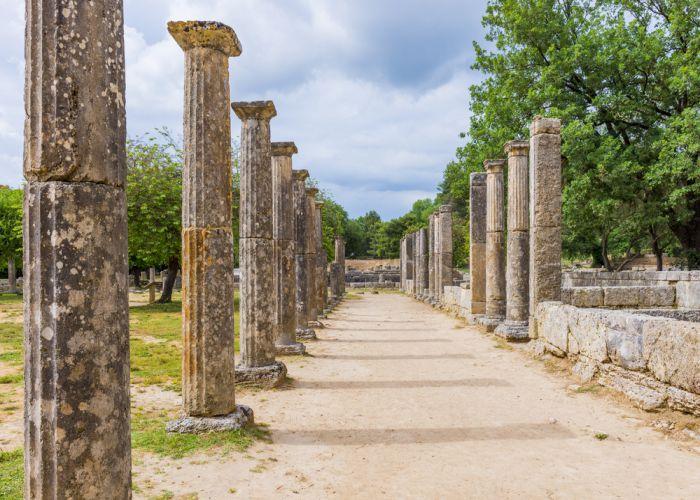 The Olympic Games were a cornerstone of ancient Greek culture. They were so important that even the ancient calendar was divided accordingly to the dates in which the Olympic games took place. Participating in the games was one of the highest honors a man could ever live for and being the winner was as close to immortality as a man could get. Hence, the athletes coming from different city-states quickly came to be their official representatives and therefore a great opportunity for each city-state to declare to the rest of the Greeks their superiority. At some point, the glory of the Olympic winners was so high, that when winners were returning to their hometowns, the city's authorities were demolishing part of their defensive walls for the winner to enter! Such an important festival had to be held uneventfully and for that reason, the Olympic Truce was established. Messengers were sent to every participant city-state announcing the beginning of the festival and the Games. For the whole festival and seven days after its end, no warfares were allowed and sacrifices were made to Zeus. The violators of this truce were banned from the Games and were charged with a huge fine. According to Thucydides, at one point Spartans were banned from the Olympic Games for assaulting the city of Lepreum during the Truce. 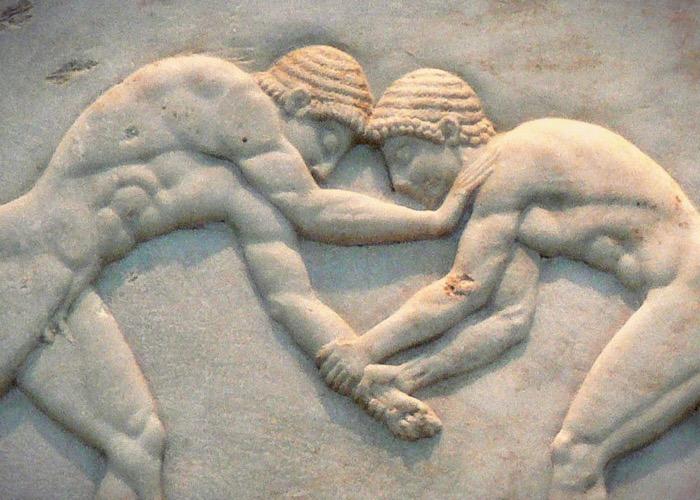 Ancient Olympic Games were a massive spectacle hosting Greeks and foreigners from every corner of the world. During some of the events, the athletes were naked allowing them to move freely. Therefore, women were not allowed in those events and the penalty for not obeying the rule was death. Pausanias, however, tells us the story of Kallipateira, a woman that defied this restriction. Kallipateira was the daughter of the famous Olympic winner Diagoras and the mother of the wrestler Peisirrodus. When her son participated in the Olympic Games her sheer wish to see him on the grounds of Olympia, led her to disguise into a man and find a seat among the spectators at the Stadium. When Peisirrodus won, she screamed out of joy, giving away her disguise. She was arrested but luckily not executed because of her glorious ancestry of Olympic winners!

The wonder of the Ancient World 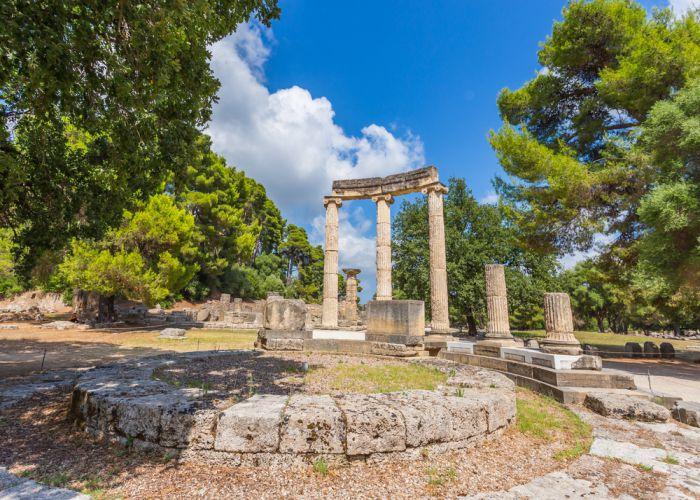 In the temple of Zeus at Olympia, Phidias, the great sculptor of ancient Athens created a colossal statue of the God out of gold and ivory. The statue was of such splendor that it was immediately recognized as one of the Seven Wonders of the Ancient World. Pausanias saw the statue and says:

"The god sits on a throne, and he is made of gold and ivory. On his head lies a garland which is a copy of olive shoots. In his right hand, he carries a Victory, which, like the statue, is of ivory and gold; she wears a ribbon and – on her head – a garland. In the left hand of the god is a scepter, ornamented with every kind of metal, and the bird sitting on the scepter is the eagle. The sandals also of the god are of gold, as is likewise his robe. On the robe are embroidered figures of animals and the flowers of the lily." - Pausanias, 5.11.1.

After the ban of the old religion by Emperor Theodosius in 393 AD, the statue was relocated to Constantinople and it was placed in the palace of Lausus, along with several other masterpieces of the ancient world. Unfortunately, due to a catastrophic fire, the statue was destroyed.

From the founding myths to the spectacular statue of Zeus, it is certain that Olympia was indeed a sight to behold! Perhaps the most important sanctuary of ancient Greece, the ideas and values it bore still remain a beacon for humanity. Plan your own trip to Olympia, or perhaps check out one of our Greece tours.

More in this category: « Explore the area of Messinia and its main attractions || Nafplio Travel Guide (2022 Update) »
back to top

1. The founding myths of the Olympic games

4. The wonder of the Ancient World