Messinia, with its medieval castles and vast history, is one of the most beautiful destinations in Peloponnese! Dive into the Messinian crystal waters and pristine waterfalls or explore its full-of-monuments countryside.

1. Explore Pylos and its castles

The county of Messinia is located at the southwestern part of Peloponnese. With countless mesmerizing beaches and historical landmarks, it is an ideal destination not just for nature-lovers, but also for those seeking to explore its numerous archaeological sites and castles. Here are the spots we think you shouldn't miss on your journey to Messinia!

Explore Pylos and its castles 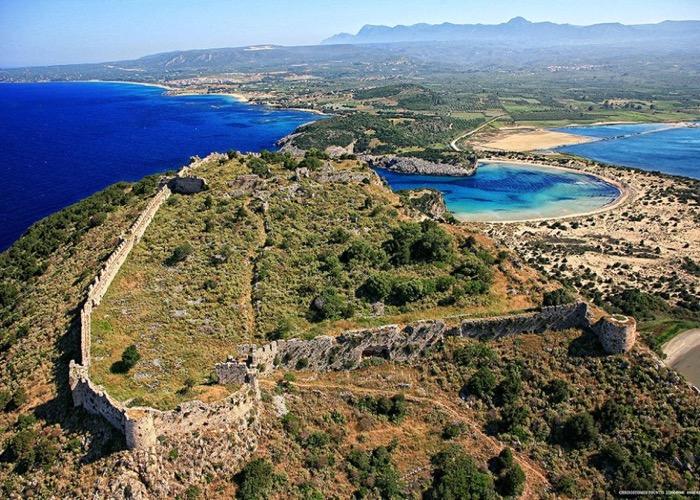 The region of Pylos -also known as Navarino- is an area of high natural and archaeological significance. Ancient Pylos was the homeland of the mythical king Nestor. He was one of the legendary Argonauts and he accomplished to seize power from king Neleus with the help of demi-god Hercules. Nestor appears in a range of ancient Greek myths, such as the one of Centauromachy or the hunt of the Calydonian Boar.

Do not miss the chance to visit the Mycenaean palace of Nestor, mentioned in Homer's Odyssey, located about 9km away from the modern town of Pylos.

Due to its strategic location, Pylos was always a place of continuous conflict. It was a site of utmost importance for the Byzantines, the Venetians, the Genoans, and the Ottomans, a fact that justifies the existence of numerous castles in the area.

Do not miss to visit Palaiokastro, built in the 13th century by Crusaders or Niokastro, one of the most impressive and well-preserved castles of Greece. Situated on top of the hill of modern-day Pylos, it was built by the Ottomans during the 16th century to protect the south entrance of Navarino Bay. Additionally, grab the opportunity to visit the small, gothic church found inside the castle! 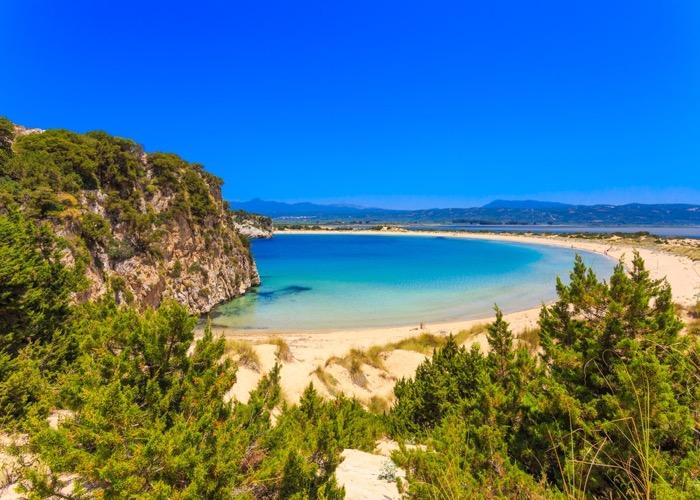 A mesmerizing natural landmark and a Natura 2000 protected natural park, the beach of Voidokoilia -literally translating to 'the belly of the ox'- is a sight not to be missed! It is believed to be the place where according to Homer, Telemachus the son of Odysseus sailed to meet Nestor and Menelaus. Dip into the crystal waters of the Ionian Sea and relax on the white sandy beach!

In case you are feeling adventurous enough, hike to the Cave of Nestor, located at the foot of Palaiokastro or to the Mycenaean tomb of Thrasymedes, son of Nestor, found on the northern hill of Voidokoilia beach. Do not forget to check out the tiny, beautifully secluded beach of Glossa, a favorite spot for nudists. 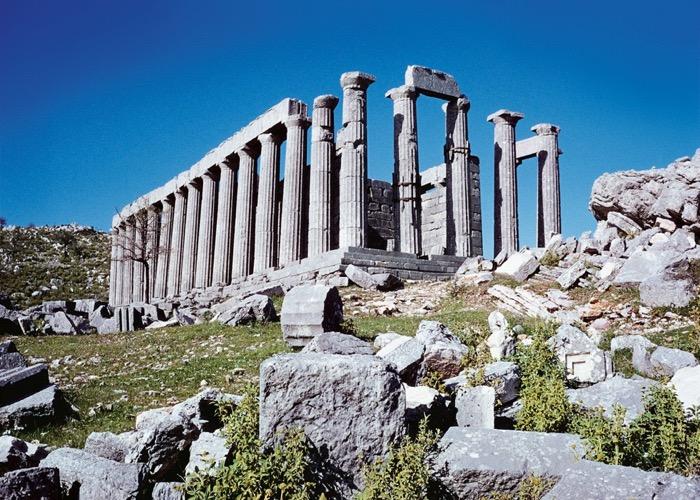 This Doric temple is located at the western point of Peloponnese, approximately a 1 ½ hr away car-ride from the city of Kalamata.

Built in the middle of the 5th century BC by the great architect Ictinos (one of the Parthenon architects), it was dedicated to Apollo Epikourios (meaning Apollo, the Helper). Famous for its beauty even in antiquity, Pausanias witnessed the temple and dared to compare it only to the one of Athena Alea in Tegea.

Due to its remoteness, the temple of Apollo Epikourios survived through pillaging and destruction over the centuries, to be rediscovered by European travelers only in the 18th century. In 1812, two archaeologists Charles R. Cockerell and Carl H. von Hallerstein visited the temple, dispatching most of its sculptures and important architectural parts.

Their majority is currently exhibited at the British Museum in London. 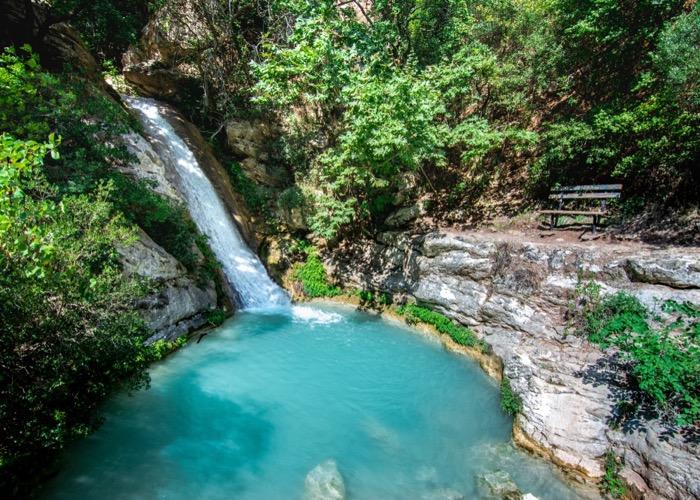 Some 40min away from the temple of Apollo, there are the Neda waterfalls, a unique natural park of unmatched beauty. Accessible through paths crossing the densely forested gorge of Neda, they offer a great opportunity for trekking-lovers. As a reward, you will admire the majestic scenery and swim in the natural pools of the waterfalls of River Neda, named after one of the Nymphs that raised Zeus.

A task not for the fainthearted, prepare beforehand for a demanding physical activity and ask the locals for the starting points of the trails. 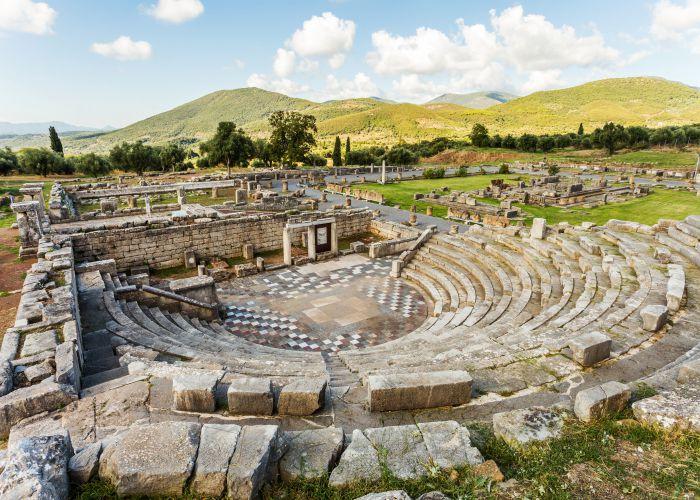 The archaeological site of ancient Messene is one of the most impressive ones found in Greece, awarded with the Europa Nostra Award in 2011.

Refounded by the Theban general and statesman Epaminondas during the 4th century BC, the city-state of Messene, even though always threatened by powerful Sparta, it eventually came to become a prominent power of ancient Peloponnese. Visit Asclepeion, the tomb of Aristomenes, the Odeon and the impressive stadium of the city, or walk beside next to the ancient walls and its still standing watchtowers! 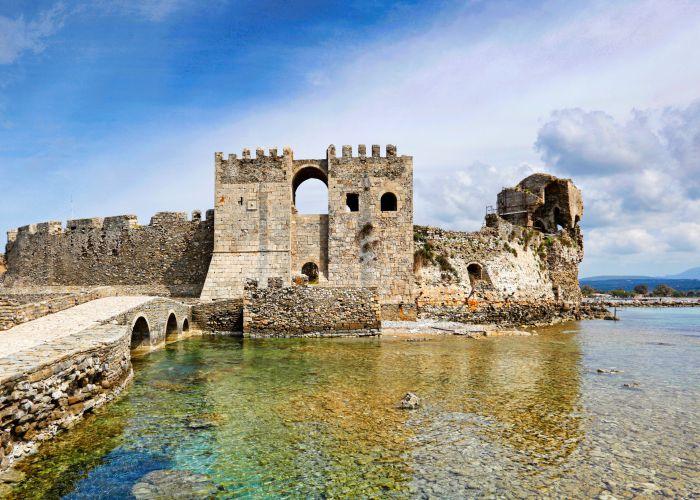 Methoni castle is located on St. Nicholas cape in southwest Greece. Originally built by crusaders, Methoni was an important trading point during the journey of pilgrims to the Holy Lands. It is dated to the period of the Venetian rule (13-15th century) and the only connection to the mainland is through a heavily fortified arched bridge.

At the most southern point, an octagonal tower once used as a prison -known as Bourtzi- overwatches the sea passage contributing to the impregnability of the castle. Wander around the medieval ruins and after your walk, relax on the beautiful beach of Methoni right next to the monument.

One of the two islands of Messenian Oinousses at the southern tip of Peloponnese, Sapientza is a hidden paradise! With just two inhabitants, the island is a protected natural park, full of dense forests and wildlife such as the indigenous Cretan goat, known as kri-kri.

At the south shores of Sapientza is located the deepest point of the Mediterranean Sea, known as Calypso deep with a maximum depth of 5.267m. On the island, you can see a beautiful lighthouse built with the order of Queen Victoria of Britain, to guard the sea passage close to a tiny heart-shaped island. There is only one available beach on Sapientza, Ammos, at the northern part of the island accessible by small boats sailing from the mainland.

More in this category: « Ancient Messene: The Most Impressive Greek Archaeological Site || An introduction to Olympia; a Small Town with a Vast History »
back to top

1. Explore Pylos and its castles