Coming in the top 5 of the European Best Destinations 2017 competition, Athens has shown herself, once more, to be a welcoming city of warmth, wonder and endless entertainment. So where better to start your 2019 than in one of the world's oldest cities that manages to boast treasures of antiquity alongside powerful street art? Whether you want a New Year of partying or a relaxed meal for two, Athens, as always, has it all....

1. Plenty of food and cheers!

2. Something for the young and young at heart

3. See in the New Year with style; Syntagma or Seaside?

5. Countdown to the New Year

Let us begin by giving you three words of advice for your New Year in Athens. Leave the car. The traffic in the city centre of Athens will be considerable on New Year's Eve and as for finding a place to park? Nigh on impossible. The metro is an excellent alternative and should get you within at least walking distance of wherever you wish to go. Booking in advance is also essential as most venues and establishments will be full, although there are also a great number of unticketed, free events happening around the city.

Without further ado, here are some of our suggestions for what to do for your New Years in Athens!

Plenty of food and cheers! 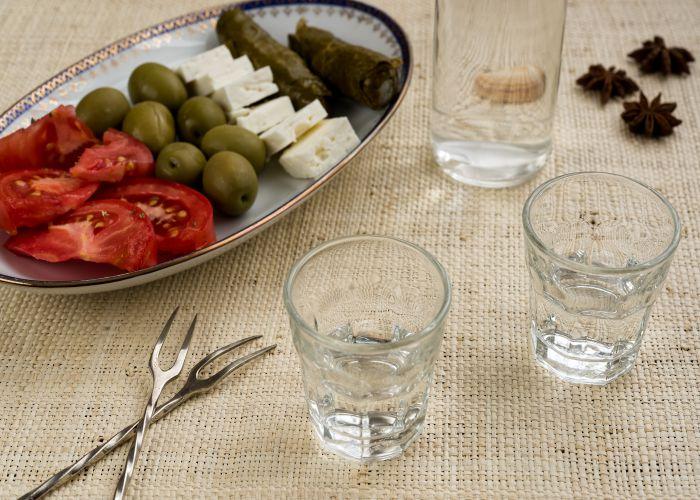 For those of you wishing to avoid the crowds, why not celebrate the New Year like a local at a small, traditional mezedopoleio. These establishments offer a warm and informal combination of Greek appetizers, spirits or wine and live music. Drinks wise, ouzo (an anise-flavoured aperitif), rakomelo (raki with honey) or a jug of the house wine are all local choices that perfectly accompany the range of meze dishes available such as; saganaki (fried cheese) dolmades ( rice parcels wrapped in vine leaves) or kolokithokeftedes (fried courgette bites). Try Kafeneion 111 near Monastiraki square or Arodou just of Iroon Square but get there early as both are extremely popular!

If you'd prefer a full sit down meal you won't be spoilt for choice either; almost all tavernas and restaurants are open for New Year's Eve. For those who seek out the Michelins of this world, there is Funky Gourmet with creations like sea urchin caviar (oh so far from the humble souvlaki) and Spondi, located in Pangrati serving what can only be described as works of art. For impressive views of the Acropolis with a thoroughly Greek menu (enter the obligatory tzatziki, mezedes and roast lamb) try Strofi, displaying signed photographs of the many notable characters that have dined there over the years, a testament to their indisputable quality.

For more ideas on where to go this New Years’ take a look at our Agenda of Athens, an up-to-date, hand-picked selection of our absolute favourite bars, restaurants, cafes and eateries!

Something for the young and young at heart

If you’re strolling around the centre on New Year’s Eve and looking for something fun for the family, head to the National Garden of Athens for a host of free activities from games, theatre, a mini carousel and a play park. Close to the parliament in Syntagma Square, it is an evergreen oasis of calm right in the centre of the city.

It may be winter in Athens but there’s still plenty to do by the sea if you head to Marina Flisvos and Flisvos Park. As well as admiring the many superyachts that berth there as you unwind with a hot chocolate from one of the marina’s many stylish cafes, it also offers something for the children to enjoy too. This year, running from the 10th of December until the 6th January are creative workshops, live music events, dancing, face painting as well as Santa Claus and his grotto!

See in the New Year with style; Syntagma or Seaside? 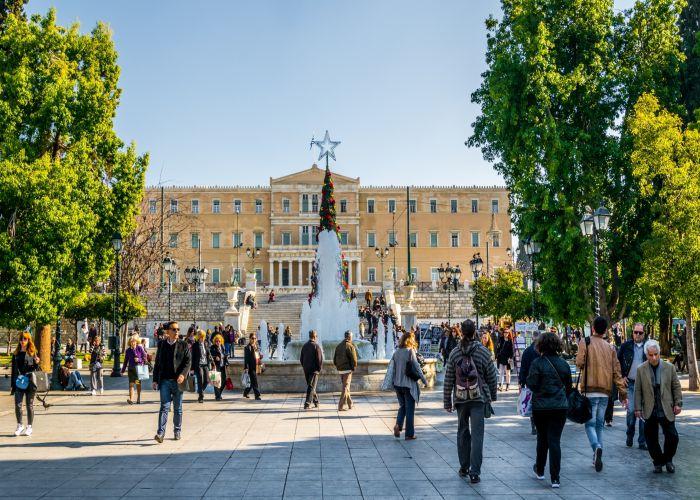 As the sun sets and the stars appear on the last day of 2018, take a walk through Syntagma Square. Always impressive, at this time of year, it is even more so with a large Christmas tree taking centre stage and a sailing ship made out of fairy lights (decorating sailing ships for Christmas is traditional in Greece).

On Syntagma Square, if you feel like opting for a luxurious start to 2019, head to the hotel Grande Bretagne where you can choose from their Winter Garden, Roof Garden or Tudor Hall depending on whether you prefer live jazz music, a string quartet or a DJ set. Your choice of setting also has to be based on your dining preferences- blue lobster with sea urchin mayonnaise or black truffles and foie gras? Such choices of opulence are the demands of the day at Grande Bretagne!

For something a little different but still, in the party atmosphere, escape the city lights and head to Balux Prive in Glyfada. On the beach, in a cosy cocktail beach bar starting from €30 per ticket you can enjoy an evening of champagne hosted by the likes of Sonarise and Armon Dee with an open bar (because no great story ever started with a salad). 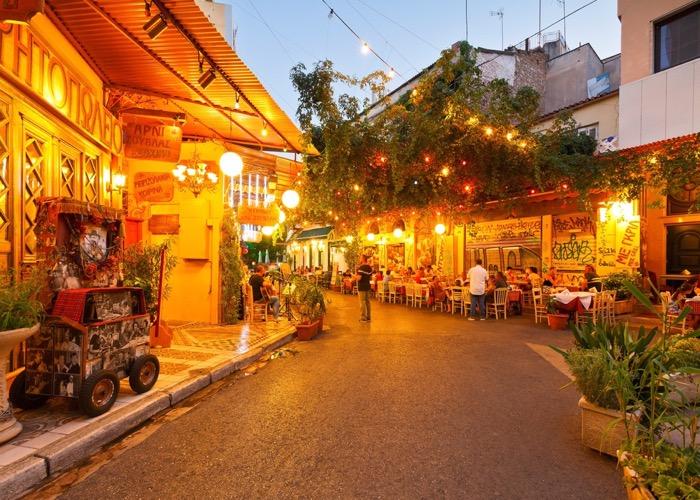 For those of you who really want to let your hair down and start 2018 with dancing all night to international DJs and sipping the very best that Athenian bar maestros can do look no further than the neighbourhood of Gazi. Reachable via the centrally located Keremeikos metro station the surrounding area is full of creatively designed nightclubs and bars and a hip crowd to go with it too for that matter. Gazi is renowned for its night offerings and edgy vibe all year round but New Year’s Eve, in particular, is definitely a party not to be missed in Gazi!

Whilst by day Psyrri may be known largely for its vintage markets, small cafes and meze shops, by night it becomes a draw for those looking for alternative music. This year, for New Years’ Eve at Monastiraki Centre (for the Trance fans amongst you) an impressive line up will be playing through the night with tickets starting at €17. A few other venues of note are Astron and Death Disco, the latter being a self-styled “mecca of alternative clubbing” they offer everything from 80s music to indie, electro, post-punk and pretty much whatever else their clientele request!

Countdown to the New Year 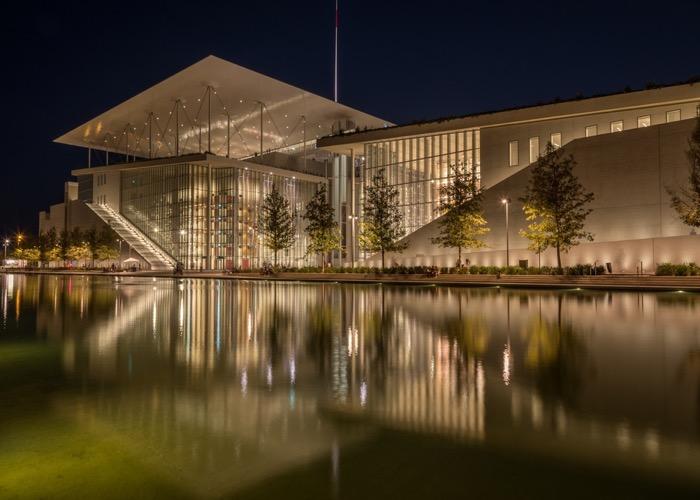 For the official countdown to New Year, the Municipality of Athens, with the support of Athens Culture Net and the Stavros Niarchos Foundation have designed an evening that will complete the programme of Christmas fairytale inspired events of December in Athens. Taking place in Thiseio the night will be hosted by some of Greece's most celebrated actors, singers and TV personalities. A variety of bands and ensembles will perform all through the evening including the Athens Philharmonic Orchestra and the Circus School of Athens. With the dramatic backdrop of the Parthenon the Mayor of Athens, Giorgos Kaminis, alongside singer Mariza Rizou and actor Panos Mouzourakis will begin the countdown to the New Year accompanied by a fantastic fireworks display, so if you’d like to truly be part of the cities’ welcoming in the New Year festivities- head to Thiseio!

You can always check our guide on the best things to do in Athens.

And since we’re on the subject of New Year, if you’re planning a list of new year resolutions which you will ardently swear by on January 1st and have long since abandoned by February, we would like to propose an alternative. Make a promise to see for yourself what a great city Athens truly is and everything that Greece has to offer...the countdown for booking your tickets to Greece has started!

From the team at Greeking.me here’s an early Καλή Χρονιά! (Happy New Year)!!!

More in this category: « How to spend 3 days in Athens || Visiting Athens on a Cruise: Tips & Things to do »
back to top

1. Plenty of food and cheers!

2. Something for the young and young at heart

3. See in the New Year with style; Syntagma or Seaside?

5. Countdown to the New Year