Rafina is located in the center of eastern Attica and is the second-largest port in the prefecture after Piraeus and one of the largest in the country. Now it’s time to explore it!

1. Destinations you can reach from Rafina Port.

2. The history behind Rafina Port

It is a densely populated area in the center, close to the port, but has large areas with parks and green spaces, as well as two large beaches, the first near the port and the second, the famous beach 'Marikes,' in Avlaki in the south, near the border with Artemida.

Today, Rafina is essentially a suburb of Athens, thanks to the Attiki Odos that improved access from the city center. Moreover, it has experienced significant growth in recent years as more and more coastal lines choose its port. The city is 25 km from the center of Athens.

Destinations you can reach from Rafina Port. 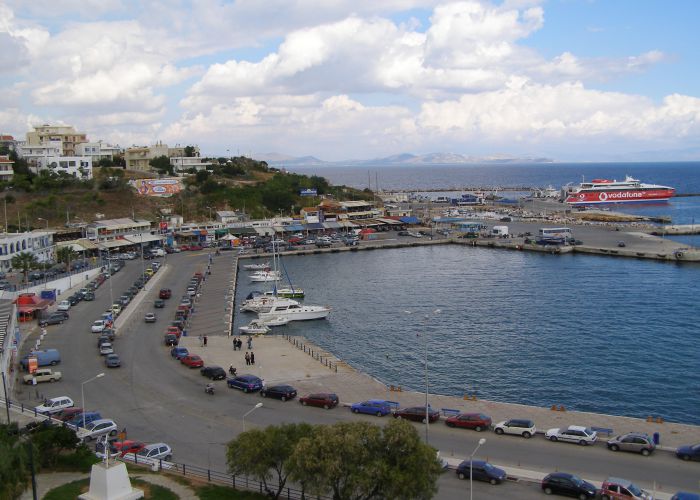 Ferries leave Rafina for southern Evia and the Cyclades.

The closest route from Rafina is Marmari, Evia, at the island's southern end. Usually, no reservation is needed, while it also serves guests visiting Karystos. However, Southern Evia is quite far away if one follows the road route through Chalkida, mainly because the road network is not good.

Andros is the closest destination from the Cyclades islands served by Rafina. It is about 2 hours away, while it has frequent itineraries. Recently, in fact, a large modern conventional ship has been added to the line, which upgrades the destination, which continues to Tinos and Mykonos.

Another route from Rafina is to Mykonos-Tinos-Naxos-Ios-Santorini. Moreover, ferries from Rafina to Heraklion operate seasonally. The itineraries change every year, while some are launched especially for the summer.

The history behind Rafina Port 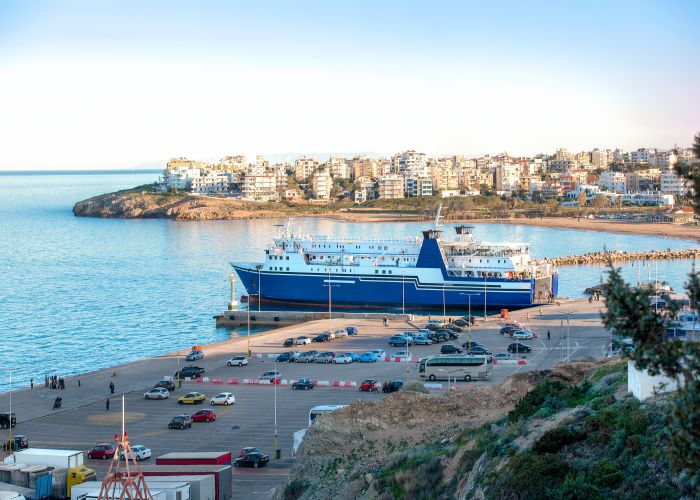 The port of Rafina was built in many phases. The first phase of the port takes place around the first two decades of the 20th century with the construction of a small pier by Alexandros Skouze, a wealthy and powerful name at the time, to serve the needs of the Skouze estate, which amounted to 30,000 acres and stretched from Pikermi to Rafina.

Until the arrival of the refugees in 1923, the port served the needs of Skouze's farm, while of course, it was also Skala where the fishing boats came and left their fish to be transported to Athens.

In 1923, refugees came from Triglia in Asia Minor. In the 1930s, the needs grew, and the port expanded. Larger passenger ships started traveling to Aliveri, Karystos and Andros were now using the port.

After the war, there was the arrival of the cement ship in February 1948, which gave a significant boost to the port and changed its fate.

In the 1960s, significant work began to improve port facilities with the construction of new quays. In addition, the arrival of the first passenger/vehicle ferries gave a powerful new dynamic to Rafina.

In the '70s, a new expansion of the port began to serve the constantly increasing ships. After the mid-1970s, the vessels of Augustis Polemis came and were established in the port of Rafina.

In the following decades, the port continued to expand but without becoming a genuinely safe port. Then, open-type ships made their presence prominent. They connected Rafina with Andros, Tinos, and Mykonos in the first phase of the development of the line.

During the occupation, the port played an essential role in the escape of patriots, Greeks, and foreigners to the Middle East. They were usually transported to Andros. While in the old days, the port served mainly fishers, the arrival of refugees gave a purpose to Rafina port.

The population of Rafina started growing a lot. Gradually, it acquired a transport character, mainly for Marmari, Styra, Karystos, and Aliveri. Larger boats were slowly being added, and the itineraries reached Andros.

After the occupation, 1948 was a landmark year for the port, as when a ship named 'Karystos' tugged a cement ship from Perama. This cement ship was the first organized pier for mooring ships. Until then, there was only a small wooden staircase on the dock, on which only small boats could side.

For this reason, the cement ship played an essential role in the development of both the port and Rafina.

The post-war period finds Rafina in a thriving economic and social reconstruction effort that is strengthened mainly by the modernization of the port, a series of basic, functional projects, and the construction of buildings.

In 1994 Rafina - second, after Piraeus port - became a Municipality. Today's Rafina is a beautiful, seaside, modern city that retains its color, respects its identity, loves its inhabitants, and attracts many vacationers and visitors.

These are two places near the port of Rafina with a long history and enviable beauty. So if you arrive a little earlier than your departure or miss the ship, take some time to visit them.

The Hill of the Fortress 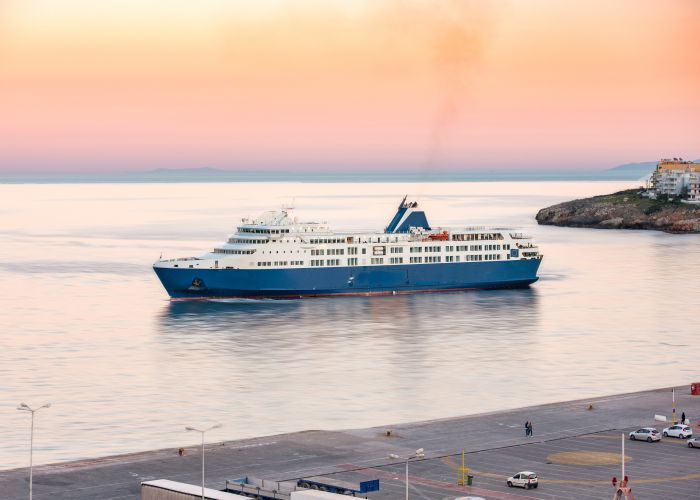 The Hill of the Fortress offers a unique view and a dense forest of 300 acres of pine trees, ideal for relaxation and hiking. But at the same time, it has a rich history. During World War II, the Germans recruited all men between the ages of 16 and 60 to build underground shelters on the hill that survive to this day and are worth a visit. Its position was not chosen by chance, as it allowed them to supervise the whole area from Schinias to Porto Rafti.

The chapel of Agios Nikolaos 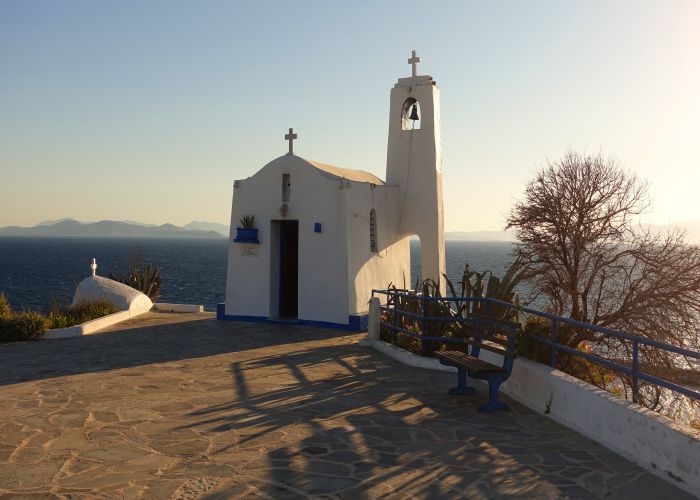 Another place in Rafina with an unmatched sea view is the chapel of Agios Nikolaos, where -weather permitting - you can see as far as the region of Evia. In October 1947, three locals and an architect built the church of Agios Nikolas on the rock above the port.

Its beauty overlooking the endless blue will remind you of a fantastic Cycladic landscape. The patron saint of sailors, Agios Nikolaos, begs for good voyages, while the church has become a reference and meeting point for locals and vacationers over the years. 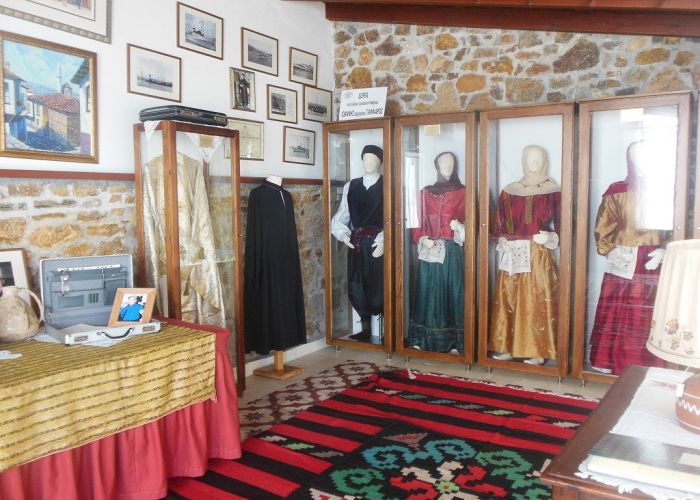 In an old house with a tiled roof, blue shutters, and a manicured garden with flowers that exudes a heavenly smell, you can visit the Folklore Museum of the Association of Trigliani - Asia Minor Rafina. In it is housed the modern history of the city that was formerly called Nea Triglia as the inhabitants of Triglia from Asia Minor had settled there. When the persecution took place, many of them were transported to Greece and settled in Rafina in 1923.

A tour inside the museum will connect you with the past that was lost in those years in the tragic persecution, with the modern history of settling in a place where spatial similarities were the reason for the creation of a Trigliani home in this area. 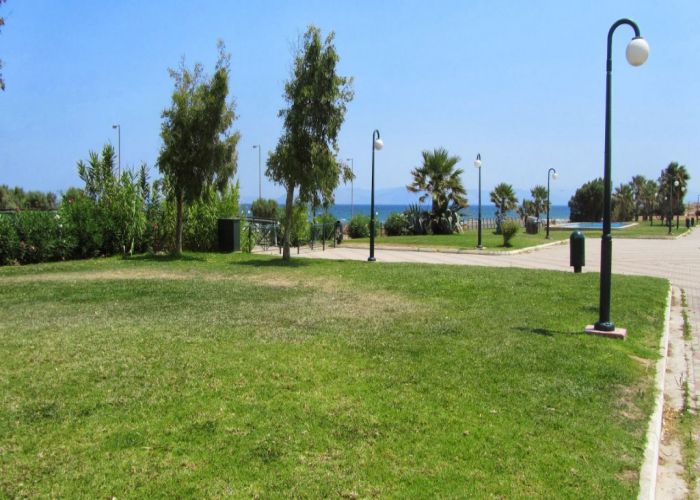 Kalamanli park is a large and organized green leisure area that offers a variety of activities. With cobbled streets ideal for walking, jogging, and cycling, the refreshment room with the beautiful sea view, the playground, the large areas with lawn for a picnic, the benches where one can gaze at the sea undisturbed for hours, is an ideal attraction for all ages. 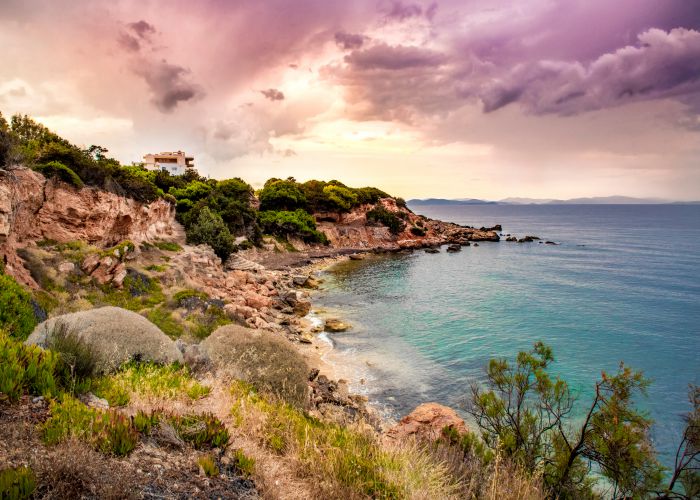 One of the most popular beaches on the north coast of Attica owes its name to the spectacular red -or 'kokkino' in Greek- rocks that surround it while protecting it from the north winds that afflict the area.

Its main features include crystal clear, turquoise waters, golden sand, fine pebbles, and a perfect semicircular shape that guarantees fantastic photos from above. You will find it shortly after Rafina, following the signs to 'Red Harbor.' At the top of the rocks, there is an excellent quality restaurant with fresh fish, summer delicacies, and beautiful views. 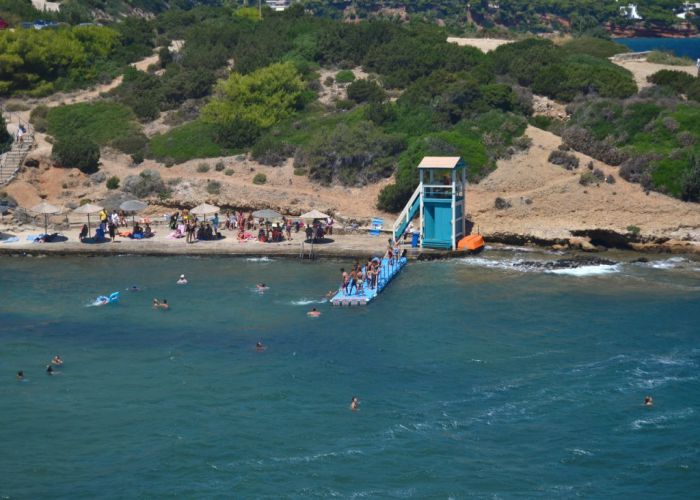 It is a small, picturesque well-protected cove between rocks north of the port.

The crystal clear waters with the intense blue that in places reflects the golden rays of the sun, as well as the quiet that it offers, give the perfect feeling of escape from the noise of the city.

A rudimentary concrete pier has been built on this beach, and wooden umbrellas that serve for sunbathing and swimming in its relatively deep waters. 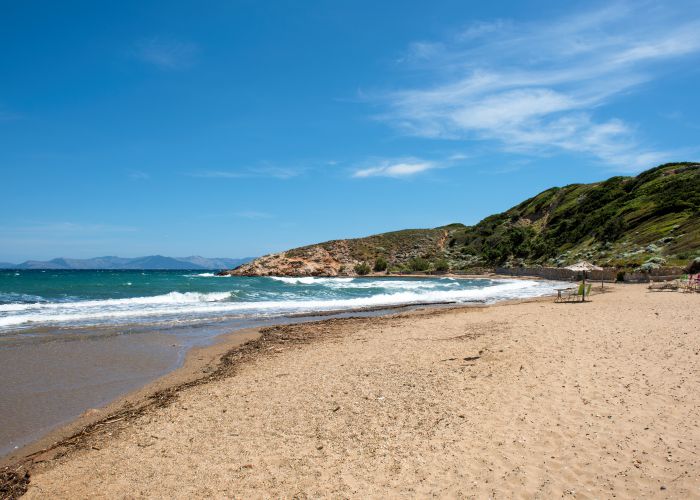 'Marikes' beach, also known as 'Nereas beach,' lies about 1.5 km outside Rafina. This picturesque beach with fine white sand is surrounded by huge rocks that protect it from strong winds and give it an extraordinary and wild beauty.

It also acquires importance because next to it is the 'Hermitage,' an incredible archaeological site of metallurgy from prehistoric times. The settlement was created by ascetics in 3,000 BC. and morphologically resembled Mount Athos.

How to get there 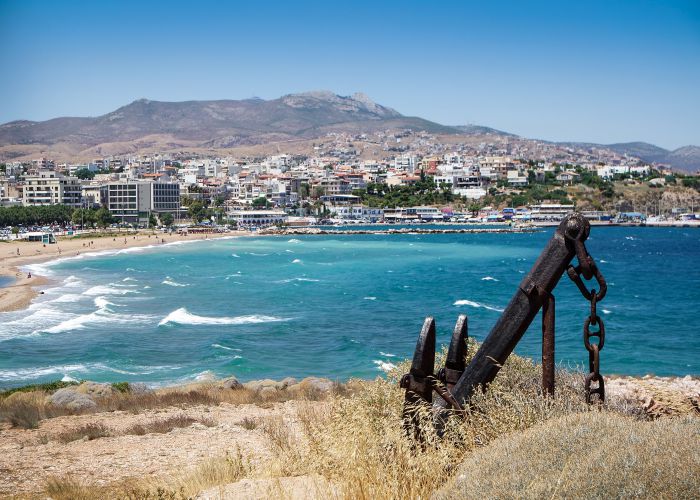 The port of Rafina is located at a distance of about 40 km from the center of Athens and 10 km from Athens International Airport. Below we present to you the easiest ways to access it.

KTEL Attica buses to Rafina depart daily from Mavromataion Street in the neighborhood of 'Pedion tou Areos.' The starting point is a 10-minute walk from Victoria Station on Metro Line 1, via Heyden Street.

From Athens International Airport, also depart from KTEL Attica to the port of Rafina. The journey takes about 30 minutes, and the ticket costs € 3.

You can reach the port of Rafina via the bus line 314 St. Dukissis Plakentias - Rafina, which has been operating since July 2017. The line has a starting point at 'Doukissis Plakentias' station of line 3 of the Metro. The closest stops to the port of Rafina are the stops Vgena and Rafina Intersection. From there to the port there is a 10-minute distance by taxi. The itineraries take place every 35-85 minutes depending on the day and time, while the route from 'Doukissis Placentias' station to the Rafina intersection takes about 40 minutes.

The drive from the center of Athens to the port of Rafina requires about 50 minutes - 1 hour, depending on traffic. Alternatively, you can cover the route to Mesogeion Avenue by Metro until Nomismatokopio station, and from there continue by taxi. The cost from Athens to Rafina is about 20-25 euros. Please keep in mind that all accessories such as the suitcase are now integrated into the taximeter price, and the receipt to be issued must include them.

Rafina is one of the areas of Attica where you can spend all day happily, have fun, and admire some unknown attractions.

The name of Rafina comes from its first ruler and mythical hero of Attica, 'Arafina.' It has been inhabited since prehistoric times and was one of the 100 municipalities of Athens designated by Cleisthenes.

The area developed mainly after 1922 when refugees from Asia Minor settled there. The port has grown a lot in recent years and is the second-largest port in Attica after Piraeus. So don't hesitate to visit it and explore it before embarking on a ferry to the Greek islands alongside Greeking.me!

Share this:
More in this category: « Discover The Secrets Of The Ancient Agora Of Athens || Where to eat in Athens: The ultimate food guide »
back to top

1. Destinations you can reach from Rafina Port.

2. The history behind Rafina Port