Wanna travel back in time right in the center of the bustling city of Athens? Then you absolutely have to visit Plaka district, the oldest part of Athens, and explore its history unraveling before your eyes!

Plaka lies on the northern slopes of the Acropolis and it is the oldest surviving part of the city with monuments both from the ancient and the modern world. Wandering around its picturesque alleys and narrow streets, the visitor has the chance to watch a long-gone era come to life and explore the rich heritage of the city to be found in every corner. This neighborhood occupies the area where the core part of the ancient city of Athens used to be. Gradually over the centuries, the city shrank after numerous invasions, wars, and destructions.

During medieval times, the city was restricted to the northern slopes of the Acropolis, protected by the hill. In the Byzantine era, the city of Athens faced great economic development and numerous churches were built, with some of them surviving even to this day. During the Ottoman rule, the city expanded and Athens came to be an important trading centre alongside with the port of Piraeus. After the Greek War of Independence, however, large areas of Plaka were left in ruins. For that reason, the appearance of the neighborhood today is a result of the reconstruction program that followed the destruction, issued by the newly born Greek State.

How to get there 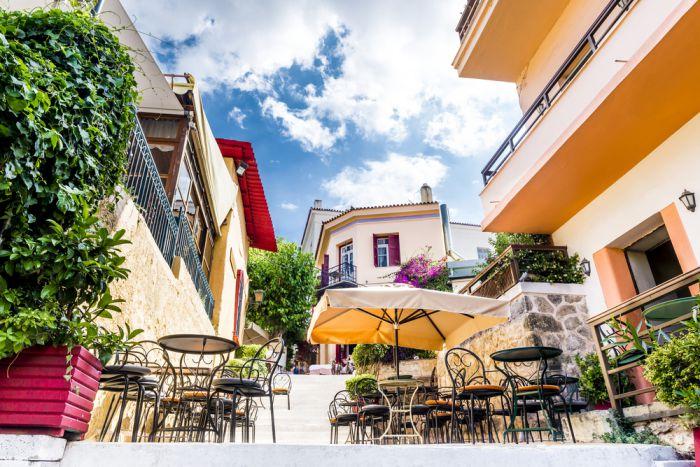 Plaka stretched over a large area in the center of Athens and it is quite easy to find it. The easiest way to do so is to find the exit of the Acropolis Metro Station at Makrygianni Street and enter the neighborhood of Plaka via Vyronos Street (it is the narrow street with tourist shops opposite the Acropolis Metro Station exit). Most streets in Plaka do not allow for traffic, however, there are some that do, so please keep that in mind as you are walking the streets. 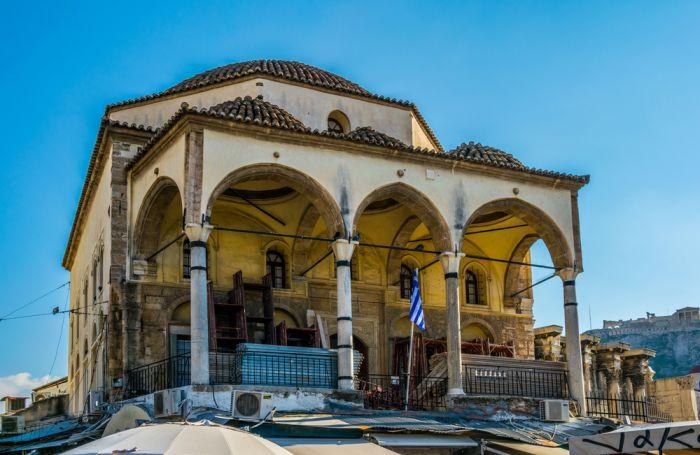 If you decide to have a walk in Plaka, here are the things you should not miss while being there: Starting from Monastiraki Square, spend some time admiring the astonishing view of the Acropolis dominating the landscape. If you walk all the way to Monastiraki Square, pay a visit to the mosque of Tzistarakis, built during the 18th century and walk among the columns of the Library of Hadrian (2nd century CE). For those that want to explore the secrets of the city, the small church on the square dedicated to Virgin Mary has some spectacular frescoes covering its walls. Right next to it, check the ancient river Eridanus, visible through purposefully placed wholes on the ground of the historical square. 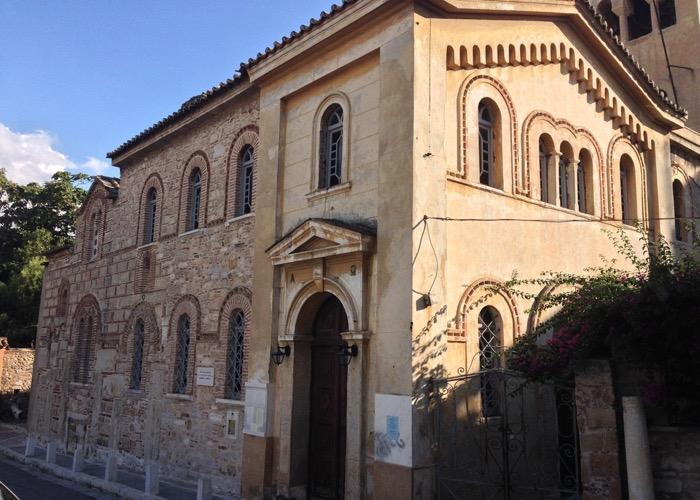 There are many Byzantine churches scattered in Plaka, most of them dating back to the 11th century CE. Do not miss the beautiful church of St. Nikolaos Ragkavas located in the heart of the old town, the Transfiguration of Jesus Christ right next to the fence of the Acropolis, or St. Catherine where you can actually walk in the ruins of a Roman bath house. The church though that is definitely worth your time, is St. Eleftherios, made entirely out of ancient Greek marble. Votive and funeral offerings along with early-Christian art cover its exterior, making up a puzzle of history you are lucky to witness. Last but not least, the massive Cathedral of Athens right next to it will dazzle you with its gilded walls and awe-inspiring frescoes. 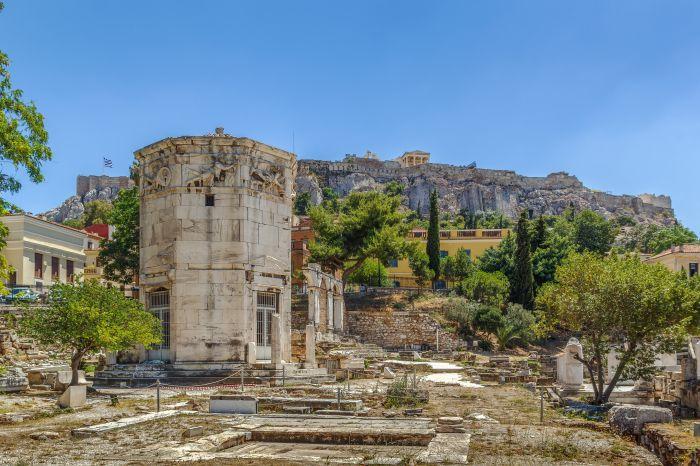 Tower of the Winds - credits: borisb17/Depositphotos.com

Hidden in the densely built neighborhood of Plaka, are many historic sites demonstrating the entire history of Athens throughout the years. Some meters away from Monastiraki Square, you will find yourselves on the grounds of the Roman Agora, built by Julius Ceasar and Emperor Augustus. Stand below the doric Gate of Athena Arhegetis and walk at the marble-paved square of the Roman Agora surrounded by colonnades. Do not miss to visit the Tower of the Winds, a marvel of engineering made out of Pentelic marble and step into the oldest mosque of Athens, the Fethiye Mosque, originally built by Mehmet II the Conqueror. Just a few streets away, find the Baths of Aerides, an Ottoman mosque still standing proud in the old town. There, you will be introduced to the history of Athens during Ottoman times. Stroll down Adrianou Str. and check from up close the Benizelos mansion, the oldest house of Athens dating back to the 16th century! Lastly, find yourselves at the monument of Lysicrates dated in the 4th century BCE and get to know how important the dramatic games were for ancient Athenians! 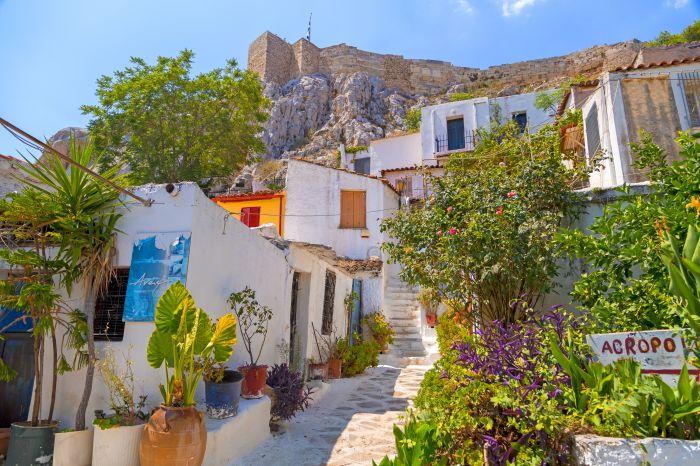 On the slopes of the Acropolis, lies the beautifully hidden neighborhood of Anafiotika. During King Otto’s reign carpenters and stonemasons from the Cycladic island of Anafi were brought to Athens to help with the refurbishment of the King’s palace. They chose Anafiotika's area to build their houses and because of the homesickness they were experiencing, they build a charming neighborhood in the style of their beloved island. Later, during the 1930s, Greek refugees from Asia Minor also established themselves in the area and added their own culture to Anafiotika’s charm. Walking through the neighborhood of Anafiotika is an absolute must, especially in the afternoon or at night; the lights of the traditional cafes and restaurants perched on the winding steps create a romantic atmosphere that is truly captivating. 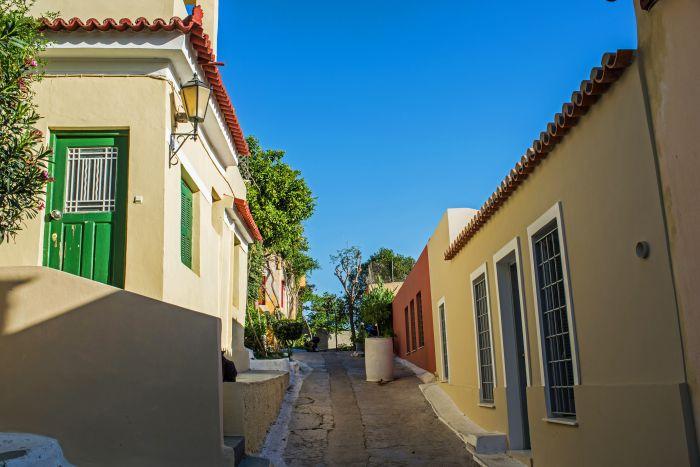 Plaka may be a popular tourist spot but this doesn't mean that the neighborhood has lost its authentic quality. On the contrary, walking through the narrow streets of Plaka will give you a taste of a very different side of Athens than the one you expect. With charming architecture, picturesque cafes and tavernas and magenta bougainvillea adorning many a balcony, Plaka is a haven away from the more concrete-dominant neighborhoods of Athens. There are also a large number of boutique shops selling traditional products such as feta, honey, olive oils, ouzo, and tsipouro. If you are looking for unique jewelry, organic cosmetics, brightly colored pashminas, leather sandals or perhaps an oil painting of the Acropolis, Plaka is the place to visit!

From ancient ruins, imperial quarters and Byzantine churches to Ottoman mosques and neoclassical Athenian architecture, Plaka has it all! Do not hesitate to explore the neighborhood. Plan your own visit to Plaka, read our Athens travel guide and check out one of our Greece tours.

Planning your trip to Greece? Get in touch with our travel specialists and design your tailor-made vacation plan!

More in this category: « Discover the Emblematic Syntagma Square of Athens || Athens Airport; A survival guide »
back to top