Athens is admired across the world for being a historical city that has stood through thousands of years and has experienced prosperity, decay, and revival. Even from the constitution of the new Greek state in 1830, the city has gone through rapid changes, making photographs from past generations unrecognizable to the local youth. Let’s take a trip down memory lane and explore some emblematic moments in Athenian history!

Flocks of sheep under the Acropolis, the biggest city avenues being dirt roads, the walls of the city clean of graffiti, and people filling their water pitchers at the edges of sidewalks. That was the image of Athens in the -not so distant- past. 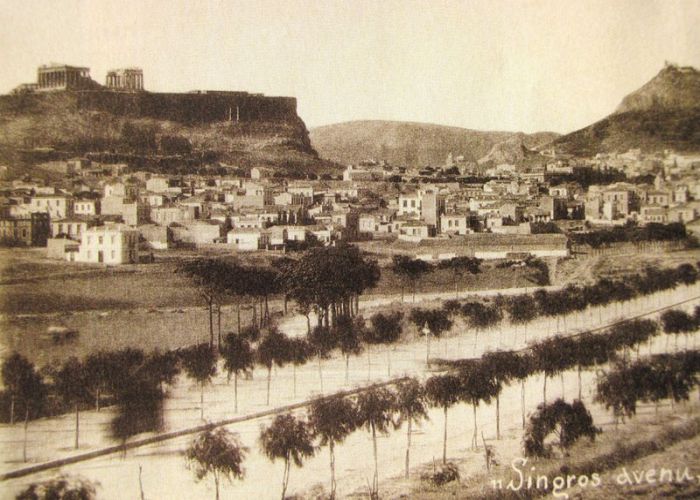 Following the first modern Olympic Games in Greece that took place in their birthplace in 1896, Athens was hosting around 128.000 in total. During those times, we find Athens trying to gain its footing once again, a city full of will for development. Both the trade market and the small industries of the region were flourishing, while the erection of buildings one after the other gave the locals much-needed jobs. Syggrou Street, the road that connects Athens’ city center with Piraeus port, looks like a provincial road and nothing like the avenue that is still vital to Athens’ traffic network today. 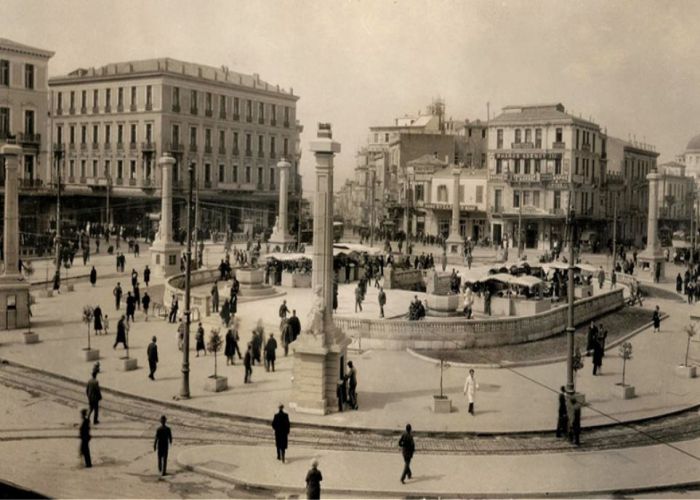 Although this period was full of negative events in Greek history, such as the wars, the Asia Minor disaster, and the economic crash of '29, gastronomy and entertainment, which had already begun to develop in the previous period, managed to blossom even more. The integration of the Ionian, Pontic, and Constantinople refugees, who had brought with them their advanced culture in regards to gastronomy and entertainment, the social liberation of women, in addition to the numerous new technological discoveries that changed the daily life of the time, with electricity, home appliances, telephone, car, cinema being only a few, not only raised the standard of living, but also influenced lifestyle, habits, and customs of modern Greece.

Omonia square in the center of Athens was full of life and vibrancy, where the Mpageion Hotel blossomed during those two decades. The building of the Mpageion Hotel is still present today across from Omonia square and is one of the landmark buildings of Athens, however, you will no longer find people of all ages and cultural backgrounds dancing the night away to jazz tunes. It is important to note that by 1930 the population of Athens had grown to 811.428. 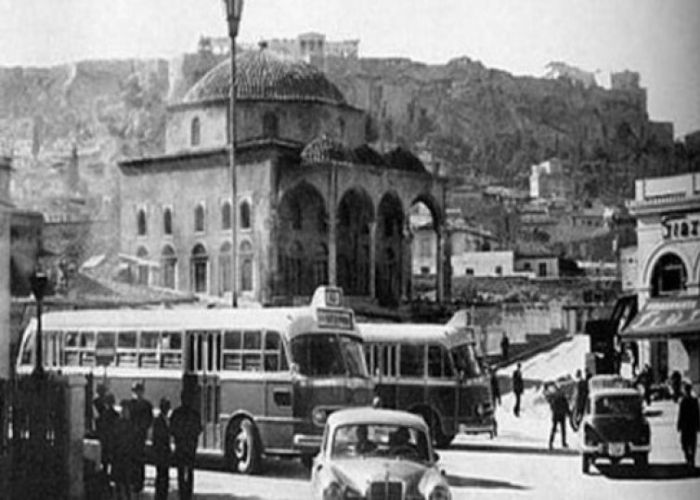 One of the most turmoiled time periods for Athens and the whole of Greece, these two decades were stained by the second World War, the brutal civil war that followed and the general political agitation that was dominating the country. The economic strangulation by the conquerors led to the death of hundreds of thousands of Athenians in a famine unprecedented for World War II. The extreme poverty set Greece back, making 1950 the decade of extreme efforts for revival and healing. For the first time ever, a process of urbanization of the population took place in Greece, in which the proportion of the rural-urban sector was overthrown in favor of the second with the main place of absorption being the Athens urban complex.

Moreover, post-colonial politics and social reality marked deeply the consciences of the intellectual world, which was reflected in their works in a variety of ways. The population of Athens in the 1950s is more than a million, however, the pictures of the time show a completely different and far emptier Monastiraki square, with only the Byzantine church and the Tzistaraki mosque present and identifying the spot as our beloved Athens’ square. At least the direct view of the Parthenon was phenomenal! 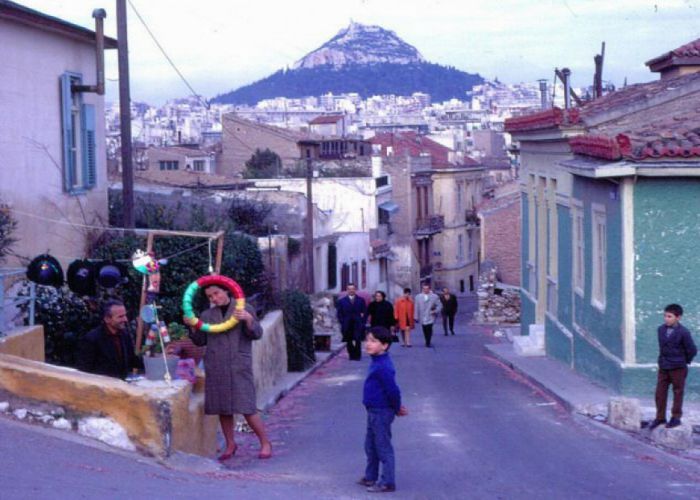 Misery was left behind, and 1960 came as a celebration of life! This decade is considered as a period of liberating vivacity, contestation, and anti-conformity starring youth and the action of its various groups. The ‘60s and the ‘70s are known across the world as the time of the hippies and Greece was no different. The financial, industrial, and social life of Athens was in development, while a number of trends in regard to fashion, music, and entertainment were imported from abroad.

Rock music, radical activism, anti-discipline, and alternative lifestyles created the so-called underground culture that has since been romanticized and has become a common topic of discussion. The greatest example of political activism of the Greek youth was in 1973 when students occupied the National Technical University of Athens to revolt against Junta, the strict far-right military dictatorship, which led to many injured and dead. 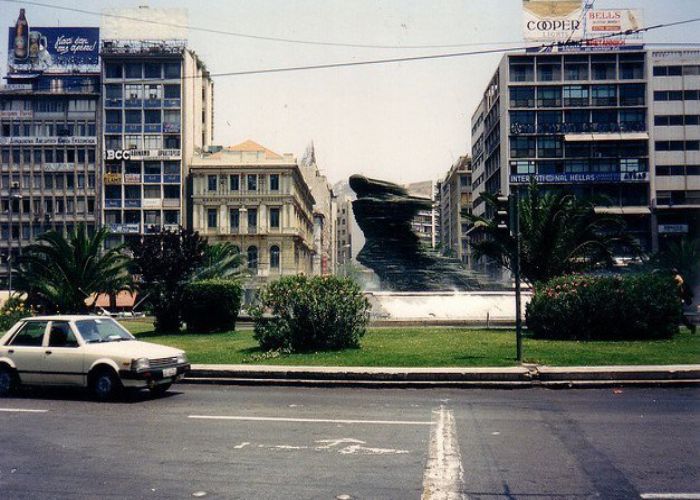 The work of art titled ‘Dromeas’ - which translates to ‘Runnner’- in the center of Athens - credits: https://www.npress.gr/αταξινόμητα/zoi-stin-athina-tin-dekaetia-tou-90/

The decade most are going to remember as their childhood years (hopefully) was an emblematic decade for the history of Greece and Athens in particular. In 1992, the construction of new Athens Metro lines commenced and Athens would finally acquire a modern and reliable means of public transport.

Significant was also the construction of the new Eleftherios Venizelos International Airport, with the 1990s becoming the beginning of the end for the old airport at Elliniko.

In the past two decades -oh how does the time fly- and despite the economic crisis that took Greece by storm, and the numerous setbacks that entailed, Athens has persisted on its road to success. Important cultural enhancement of the region has been made with the Stavros Niarchos Cultural Center being one of the brightest examples of that, streets have been pedestrianized to add to the charm of the historic city, and the parks of Athens have been constructed and refurbished.

One thing is for sure and that’s that Athens is rich in history and culture. From the ancient times, when philosophers, politicians, and warriors walked through the Athenian agora preaching about democracy, to the recent history of a nation struggling to put the pain and misery of the past behind and rise through its ashes, Greece has experienced it all.

Now let’s hope that the future holds only greatness and the best is yet to come! You can always check our Athens travel guide. Explore all of Athens’ history through its significant landmarks and monuments, memoirs of both the greatest and darkest moments of the past. Experience all of Athens in an Acropolis and Athens city tour or join us on an Evening tour of Athens’ highlights (with yummy Greek dinner!). 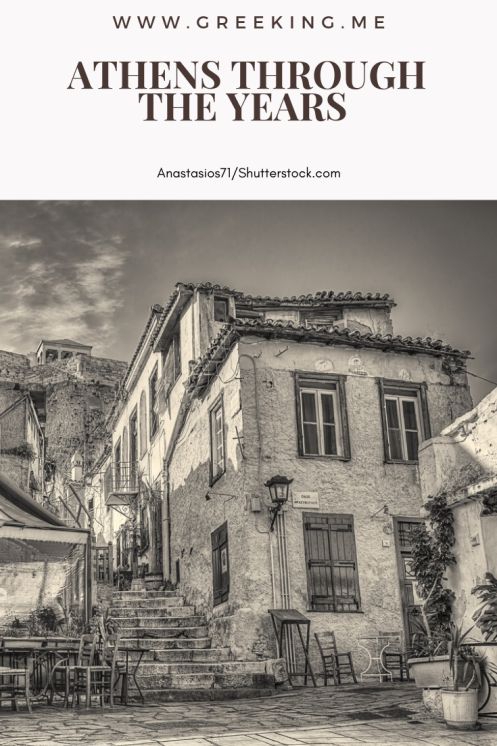 More in this category: « Our favourite walks in Athens: Explore the best walking routes of the city || The Most Instagram-Friendly Spots in Athens »
back to top