Either you want to exercise and running is too much for the summer heat or you want to explore the historical city up close and personal, an Athens walk is definitely due during your stay in the Greek capital. Follow our lead and explore the most beautiful and fascinating corners of the city as we present to you the top walking routes in Athens. 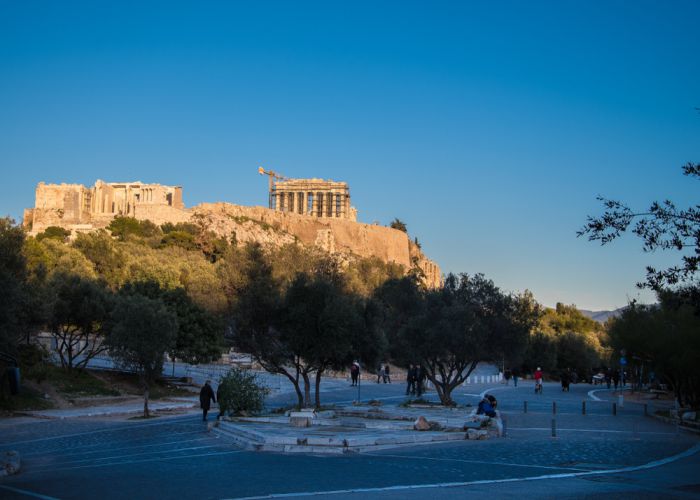 Starting off strong with one of the most loved walking routes of the Athenians, the walk along Aeropagitou Str. offers an idyllic experience with a landscape that combines Athens’ past and present.

Often referred to as the most beautiful street of Athens, Dionysiou Aeropagitou Str. -which is the street’s full name- starts from Vasilisis Amalias Av. opposite to the Temple of Zeus, where the statue of General Makrygiannis lies, and concludes on the foot of Philopappos Hill only to be renamed to Apostolou Pavlou Str. and continue to Thiseio neighborhood.

Thankfully, the famous street is one of the most easily accessible spots of Athens. Just stop at the Acropolis Metro Station and take the exit to Areopagitou's paved road. Begin your walk under the shadow of the Acropolis with a view of the Parthenon on your right and the Acropolis Museum on your left.

Along the street, you will find beautiful neoclassical buildings and old mansions that compose a postcard-like image. The small chapel you will see next to the buildings is the church of Saint Sophia and it was built in 1919. The street is named after Dionysios Aeropagitis, the first Athenian who turned Christian following the religious speech of apostle Paul and it was pedestrianized in 2003.

When the street reaches the entrance of Philopappos Hill, continue on Apostolou Pavlou Str. to pass by some of Athens’ most important ancient monuments, such as the Ancient Agora, Areopagus, Pnyx, and the Sanctuary of Pan on your way to Thiseio, where your walk will come to an end among a wide selection of coffee shops and local taverns, where you can stop for an energy boost.

You can book one of our Athens walking tours in order to explore these locations with the help of our excellent licensed guides. 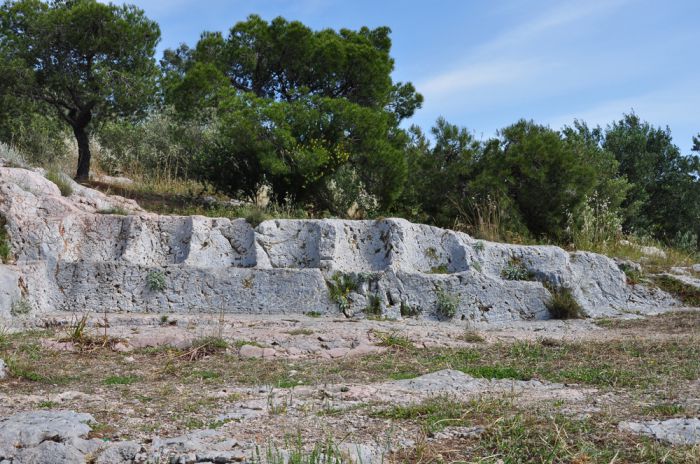 As mentioned before, at the end of Dionysios Areopagitou, on the left-hand side, you can enter Philopappos Hill to witness a magical and unique landscape that offers an unmatched view of the whole of Athens.

Due to its rich vegetation, it the perfect escape from the summer heat, while its picturesque paths create a fairytale-like environment. Near the entrance, you will find the famous chapel of Agios Dimitrios of Lombardiari. From there, you can follow one of the many paved paths that will lead you to the famous hill of Pnyx, where you can marvel at the breathtaking view that stretches before you.

On the top of the hill, lies the monument of Philopappos, responsible for the name of the whole hill and built during the reign of Emperor Trajan. Philopappos was a grandson of Antiochus the last King of Commagene in Syria, but he was financially benefiting the city of Athens and died here as an Athenian citizen.

Wear your most comfortable shoes and explore the green paradise in the heart of the city, where you can find the glorious history of Athens under every rock you turn. Despite being popular among both locals and visitors during the day, we would highly suggest avoiding to visit Philopappos Hill after sunset, as it is a secluded area and can get a bit dangerous. 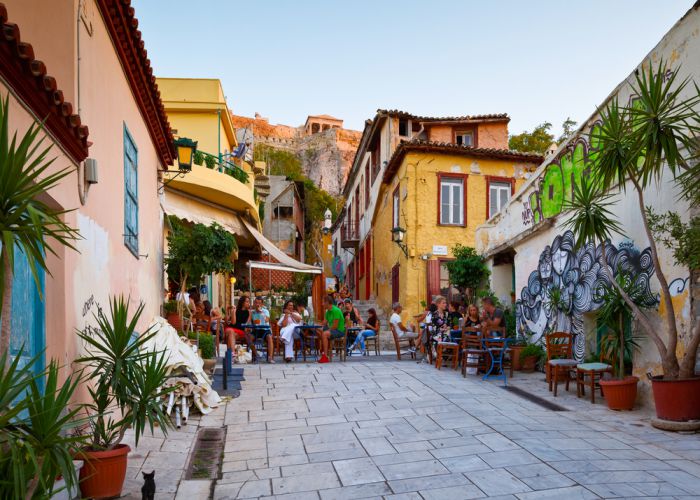 No matter how long your trip to Athens is going to be, you must include Plaka neighborhood in your waking itinerary. One of the oldest and most scenic neighborhoods of Athens, Plaka looks like it has jumped straight out of a movie. A walk around Plaka will transport you back in time, allowing you to experience the atmosphere and charm of old Athens, as it maintains the vibe it used to have almost a century ago.

It is the perfect combination of old and new with its paved alleys and neoclassical buildings being interrupted by modern-day cafes and traditional taverns. Agios Nikolaos Rangavas and the stone church of Agii Anargyri are two of the famous churches of Plaka that you will meet on Prytaneion Str.

You can’t visit Plaka without visiting the legendary district of Anafiotika, one of the most local-favorite regions of Athens that has gained popularity during recent years. Anafiotika is often referred to as the ‘hidden island’ within the city center due to the prominent Cycladic architecture that differentiates it from the rest of Athens.

The reason for the Cycladic architecture is quite a funny story: in the second half of the 19th century, king Otto hired builders from the island of Anafi to reconstruct the city. The builders decided to build a neighborhood for them and their families to reside in, and feeling nostalgic about home, they built Anafiotika to resemble their island. The bougainvillea plants enhance the Cycladic aesthetic even more, resulting in a gorgeous setting. 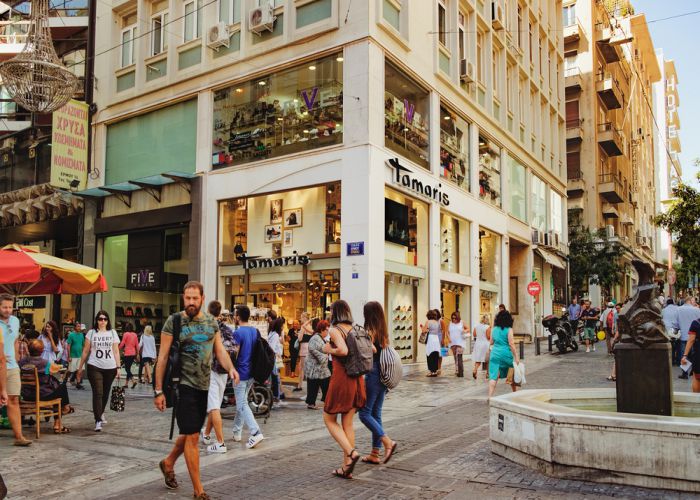 The most obvious -but just as appealing- walking route you should take while visiting Athens is the one that begins at Syntagma Square, the emblematic meeting point of the Athenians, continues down Ermou street and concludes in the neighborhood of Monastiraki.

Commence your walk in front of the Old Royal Palace in Syntagma Square that now houses the Greek Parliament. There, you can watch the changing of the presidential guards, called ‘evzones’ in front of the monument of the Tomb of the Unknown Soldier that takes place every hour and even take a picture with one. Be careful though! They are not allowed to interact with you in any way, so don’t try to engage in conversation with them.

Cross the street, pass by the fountain found in the middle of the square and continue to Ermou Street, the most commercial street of Athens and the main destination for the shopping expeditions of the locals. Descending on the pedestrianized street, you will meet famous, international retail chains as well as small local boutiques.

Then, almost at the end of the road, you will come across the church of Kapnikarea, one of the oldest Greek Orthodox churches in Athens, built some time in the 11th century, perhaps around 1050. A little further down from Kapnikarea, Ermou street comes to an end, leaving you in the middle of the famous Monastiraki Square, the place that gathers the history of Athens through the times.

There, you will find important archaeological monuments such as the Tzistarakis Mosque, the Library of Hadrian and the Monastery of Pantanassa. Additionally, you will have the opportunity to stroll through Monastiraki’s Flea Market, to buy unique Greek souvenirs to bring back home. 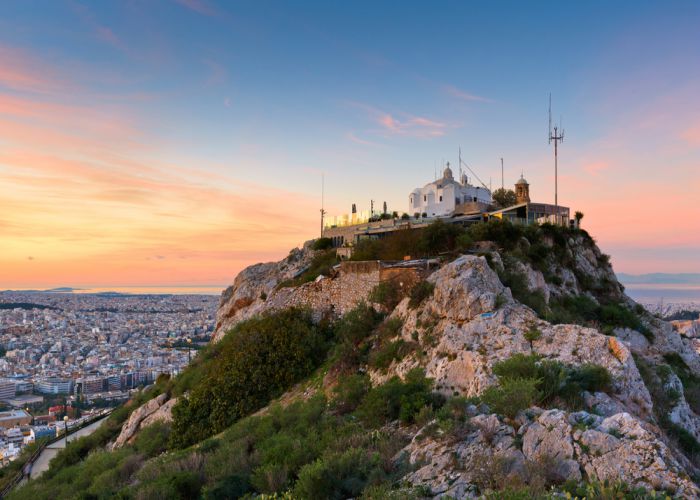 If hiking doesn't intimidate you, a walking route that is worth your time is the walk up Lycabettus Hill, one of the most romantic walks you can take in Athens and the perfect place to catch the Athenian sunset.

According to Greek Mythology, Mount Lycabettus was a rock carried by Goddess Athena, who had won over Poseidon in their battle for the sovereignty of Athens and was trying to fortify the city. The rock fell from her hands after she received some bad news from a raven. Legend has it, that because of it, ravens became black.

On the hill, there is the Lycabettus Theater, an open modern amphitheater where concerts and theatrical performances took place before. The theater was closed in 2008 due to safety reasons, however, the hill remains a popular destination for people that want to enjoy a magical view of Athens.

At the very top of the Lycabettus, lies the chapel of Agios Georgios. Apart from walking all the way to the top, the hill is accessible by a cable car, but if you can, we suggest going on foot instead, so you get the full walking experience.

Thankfully, a lovely cafe that also serves as a luxury restaurant will welcome you when you reach the top, so if you’d like to indulge in an expensive, delectable meal while overlooking the magnificent city of Athens, this is your chance! Keep in mind that Lycabettus is the second-highest point of the Athens basin after Tourkovounia and rises 277 meters above sea level and 227 meters above the city, so if you visit it after sunset, you might need a light jacket - yes, even during the summer! 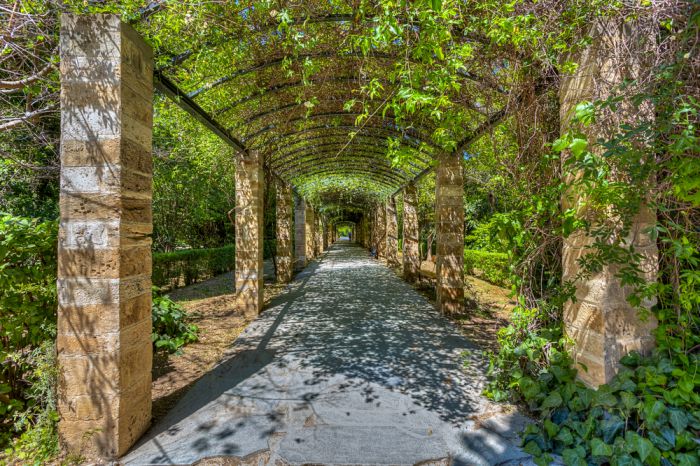 When locals want to escape the bustling city and take a deep breath of fresh air, the first thing that comes to mind is a relaxing walk around the National Graden, located right next to the Greek parliament, a few meters away from the Syntagma Metro station.

The impressive selection of trees and plants from all around the world, as well as the little zoo in the middle of the garden, make it the ultimate family destination.

You can feed the ducks and sit by one of the six water fountains to read your book under the shade of the luscious trees; there is even a children's garden library to accommodate the literature needs of your little ones, where they can enter for free, listen to classical music and engage in creative activities!

The highlights of the National Garden is the sundial located at the main entrance from Amalias Av. and the Roman Mosaic floor facing Vassilissis Sofias Blvrd. The 155 acres garden was project conceptualized by the queen Amalia as a scientific and botanical garden as well as private.

Her interest in the garden was so great that it is rumored she used to spend three hours a day personally taking care of it. The National Garden stretches to the south where the Zappeion mansion is located opposite the Panathenaic stadium where the first modern Olympic Games took place in 1896. Apart from its thousand of plant species, the garden has a great archaeological interest, as it still houses ancient ruins, columns, and mosaics. 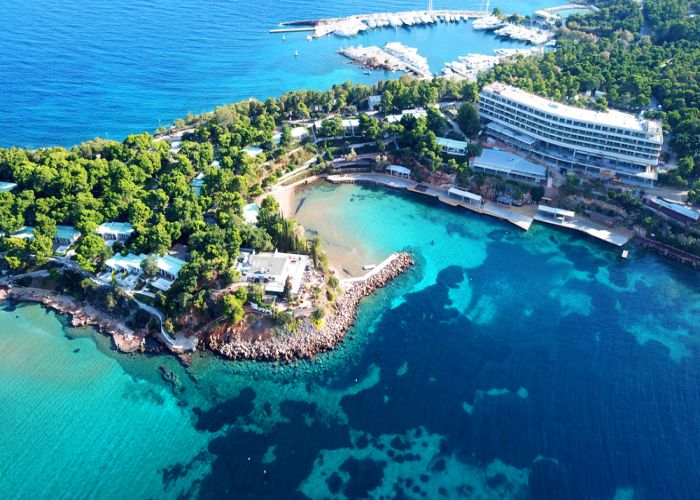 How will you know you’re in Greece if you don’t take a walk by the beach, enjoying Athens’ beautiful seaside? Lucky for you, approximately 20 minutes from the center of Athens, you can find one of the most dazzling spots of the Attica region, the Athenian Riviera.

Athens’ Riviera stretches along the Saronic Gulf, from Paleo Faliro to Cape Sounio, providing visitors with unmatched sea views and gorgeous beaches. Of course, there is no way for you to walk all of the 60 km of the coastline, however, you can walk some of it and enjoy the salty breeze on your skin.

From smooth sandy beaches to rocky coves and from local traditional taverns to luxury restaurants and coffee shops, you will come across a diverse collection of places where you can rest and get refueled by mouthwatering delicacies. You can begin your stroll at Palaio Faliro and the Stavros Niarchos Cultural Foundation, take a detour around the Marina Flisvos, one of the prettiest Athenian marinas and the ultimate place to take photos, and continue toward Alimos and Glyfada, where you can end your walk with a refreshing dive into the public beach.

Of course, there are plenty of additional spots ideal for a walk along the riviera, such as Lake Vouliagmeni, but unless you are a Marathon runner, you’re better off exploring them through a Sounio and the Temple of Poseidon tour! 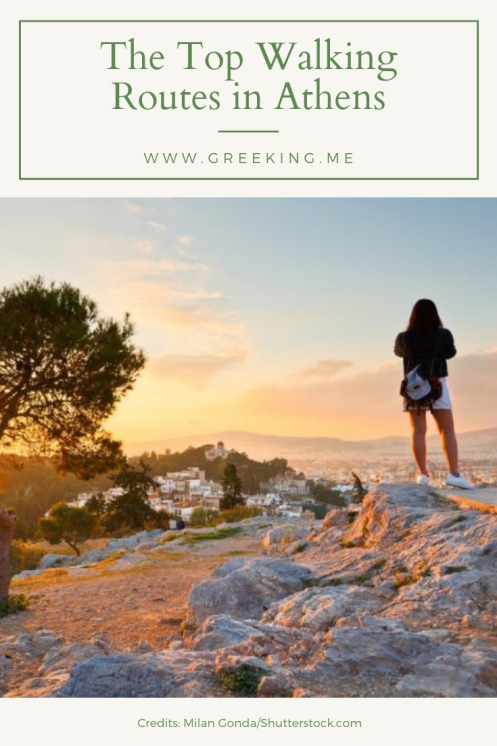 More in this category: « A Guide to the Acropolis Museum || Athens Through the Years: The History of Athens »
back to top