Athens is mostly known around the world for its classical period ruins, such as the Parthenon, the Erectheion, the Temple of Hephaestus in the Ancient Agora and so on and so forth. But how about the excellent specimens of neoclassical architecture it boasts, situated in the very heart of a modern city? Doesn’t ring any bells? Well, let us enlighten you then.

2. The University of Athens

Neoclassical is the type of architectural and artistic movement that bloomed around the 18th and 19th century in Europe and elsewhere as an effort to revive the classical forms of the Greek antiquity and the subsequent Roman Empire. In Greece, this type of architecture was very popular in the 19th and early 20th century, with many examples still standing today, such as the numerous neoclassic mansions in Plaka, our Parliament building, which was previously the Royal Palace, the old Parliament House, which is now the National Historical Museum, the Zappeion Mansion, and of course, the best examples of all: The Athenian Trilogy in Panepistimiou str., including the National Library, the University of Athens and the Academy.

The National Library of Athens 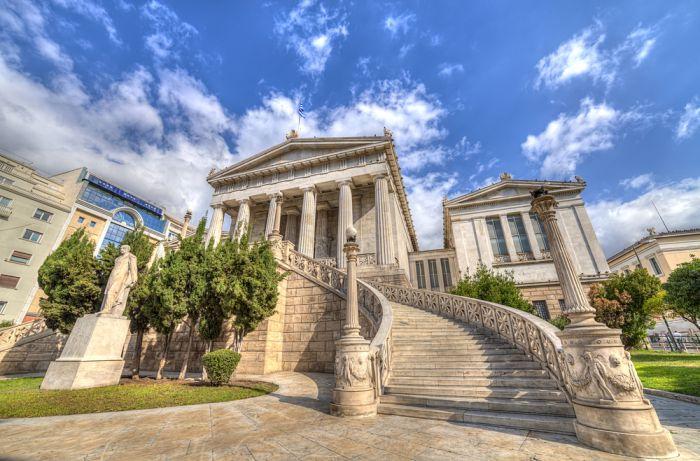 Situated on the far left end of the complex, the National Library was designed by the Danish architect Theophil Hansen and constructed bewteen1888 and 1902. It has elements of the Doric Order, characterized by its austerity of form, simplicity and clear-cut lines, as well as a double renaissance-type staircase leading to its impressive entrance. The famous white pentelic marble -coming from mount Penteli- that was used in the construction of the masterpieces of the 5th century BC, was also used in the making of the National Library 2,300 years later. Talk about continuity in art! And what about the serious looking statue that holds such a central position at the base of the building? It is Panagis Valianos, who along with many other benefactors financed and donated the National Gallery to the Greek state. Up until 2017, the National Library held close to 2,000,000 books and periodicals and over 4,500 manuscripts. Nowadays, the historical building has closed its doors to the public but the contents remain an open archive through the facilities of the Stavros Niarchos Foundation Cultural Center.

The University of Athens 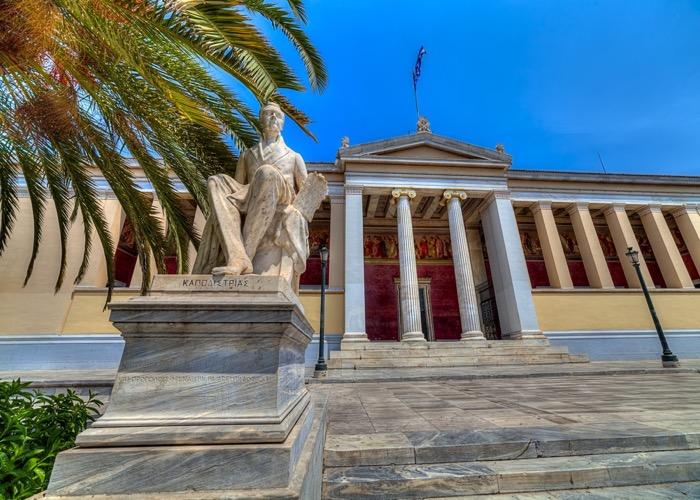 The University of Athens - credits: Anastasios71/Shutterstock.com

The University of Athens -or Panepistimion in Greek-, lies at the heart of the Trilogy. It's the first one to have been constructed, back in 1864, and also the reason behind Panepistimiou street's name -which translates to 'University street'- and the metro stop, Panepistimio right outside. It's the only one out of the three to have been designed by Christian Hansen, brother to Theophile, the original architect of the other two. Nowadays, the building houses administrative offices, but it's also where official and graduation ceremonies for all the different departments of the first and oldest university in Greece, the National And Kapodistrian University, take place. This building is another example of neoclassical architecture but compared to the other two, it sports a somewhat simpler style. Around the entrance, you can see five different statues of men. The first one depicts the philhellene William Ewart Gladstone, a symbol of close ties between Europe and Greece. The second one depicts Adamantios Korais, a leading figure during the Greek Enlightenment and also an important scholar and writer. The third one depicts Ioannis Kapodistrias, the first governor of Greece and a very charismatic political figure after whom the university is named. The fourth depicts Rigas Feraios, a writer and political thinker who played a major role in the spirit of the country and died in the War of Independence against the Ottoman Empire. The fifth and last statue depicts the Patriarch of Constantinople, Gregory the Fifth who was sent to the gallows by the Ottomans as a result of the Greeks' revolt against their rule in 1821. 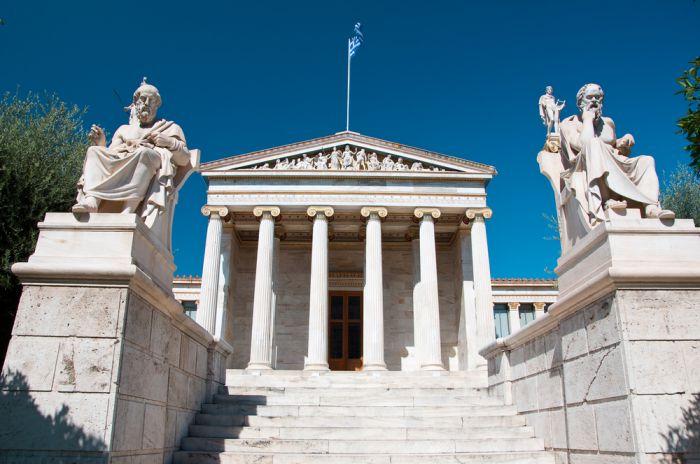 The final building on our list is the Academy. It was constructed in 1859-1885 and it's a result of the combined efforts and inspirations of architects Theophile Hansen and Ernst Ziller, as well as the sculptors Leonidas Drosis and Christian Griepenkerl. Again, fine pentelic marble was used here, while the main source of financing was a rich family by the name of Sina. The Academy is built in resemblance of the Propylaea of the Acropolis (the entrance to the sacred hill) and it's considered by many as the best example of neoclassical architecture in the world. Inside the building, there is an extensive mural depicting the myth of Promytheas painted in chronological order, as to inform the viewer of the story narrated to us by Aeschylus in his famous homonymous tragedy. On each side of the building, we see Plato and Socrates, the two great philosophers who along with Aristotle laid the foundations of Western thought and civilization. Rising higher than the roof itself, the ancient protectors of Wisdom and Light, Athena and Apollo watch tirelessly over their ancient city and their former subjects, still protecting and enlightening us in our endeavors, hopefully not begrudging our changed ways.

Our introduction to the Athenian Trilogy has completed. Expand your knowledge and better your understanding of the neoclassical movement in Athens, with our Athens City Highlights Tour. Whether you are an art and architecture enthusiast or just a novice, eager to discover more, this tour is a great opportunity to learn everything about Athens' architecture, but more importantly, all about the life and history of the late 19th and 20th century in the Greek capital.

Share this:
More in this category: « A Guide to Athens Squares || The Benizelos Mansion: The Oldest House in Athens »
back to top

2. The University of Athens