Located at the northwesternmost point of Greece, the island of Corfu -Kerkyra in Greek- is the second-largest island of the Heptanese islands and for sure a hub of Greek civilization with a significant role in the country's history since antiquity. According to ancient Greek mythology, Poseidon, the mighty god of the seas fell madly in love with the beautiful nymph Korkyra, the daughter of Asopos and Metope. He decided to take Korkyra to an uninhabited island and out of marital bliss he offered the island to the nymph.

What to see in the city of Corfu:

1. The old town of Corfu

3. The old Fortress of Corfu

From thereafter, the island was known to everyone as Korkyra or Kerkyra. From the union of Poseidon and Korkyra, a child was born named Phaeax. He came to be the king of the island which was also known as the island of the Phaeacians, the descendants of Phaeax. The importance of Kerkyra in the ancient world is reflected on many occasions. Homer, mentioned the island as being the last stop of Odysseus in his journey to reach back Ithaca, and historically the island was at the center of events relating to the Peloponnesian War. In Byzantine times, the island was named Coryfo out of the peaks of the mountains the sailors used to see approaching its port. Later on, the named that prevailed was Corfu.

The location of Corfu played an important role in the development of the island's culture. Especially during the middle ages, the island was perceived as the border between the 'despotic' oriental eastern power of the Ottoman Empire and the Italian-dominated West. Therefore, the one that shaped the character of the island was the city of Venice which held for a long time a strong foothold on its territory. Due to the presence of Venetians and afterward other western European countries such as England and France, the island experienced the effects of Renaissance, Classicism, and Enlightenment to an extent that the rest of Greece was not able to. Therefore, architecture, arts, and culture came to be much different compared to other regions of the country that continued to be under the occupation of the Ottomans.

Many figures originating from Corfu, shaped the identity of Greece in its early years after the Greek War of Independence. Perhaps the most influential one was Count Ioannis Kapodistrias that served as the first Governor of the newborn Greek State. Before taking the office of the Governor, he made a career as a diplomat in many European countries such as Switzerland and Russia, where he served as minister of Foreign Affairs. Other important figures are the composer Nikolaos Mantzaros, the poet Andreas Kalvos, the novelist Albert Cohen, the politician Georgios Theotokis, Prince Philip - the Duke of Edinburgh, Princess Alexia of Denmark and Greece and many, many more.

What to see in the city of Corfu

The old town of Corfu 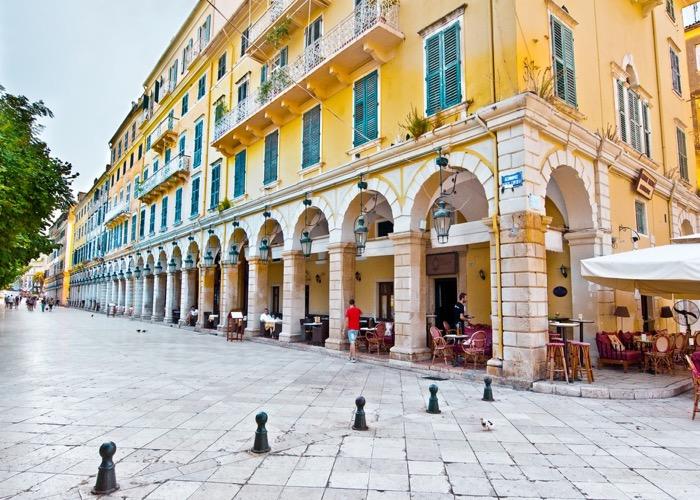 The medieval town of Corfu is a UNESCO World Heritage Site that promises the traveler an experience to remember. The architecture is directly influenced by the Venetian rule, resulting in an Italianate town with beautiful alleys and long arched colonnades that will transport you back in time. Neoclassical architecture is not absent with fine examples of mansions and palaces inside the old city center. Do not miss the chance to visit the Palace of St. Michael and St. George commissioned by the British Lord High Commissioner, Sir Thomas Maitland as his residence. Stroll around the premises of the palace and do not forget to pay a small visit to the Gardens of the People in close vicinity to the Palace. Today, the Palace operates as the Museum of Asian Art put up together after the donation of artifacts from many notable Greeks. Continuing your walk in the city, you have to check the 17th-century Renaissance-style Town Hall of Corfu, formerly known as the Noble Theater of San Giacomo, the first opera house of Greece. Other buildings that you shouldn’t miss are the Catholic Church of Duomo, the Cathedral of Corfu, the Ionian Academy with its radiant history, the Palace of Mon Repos, the Ionian Parliament, and the peristyle monument of Maitland known as “Sterna” at the center of Spianada Square. 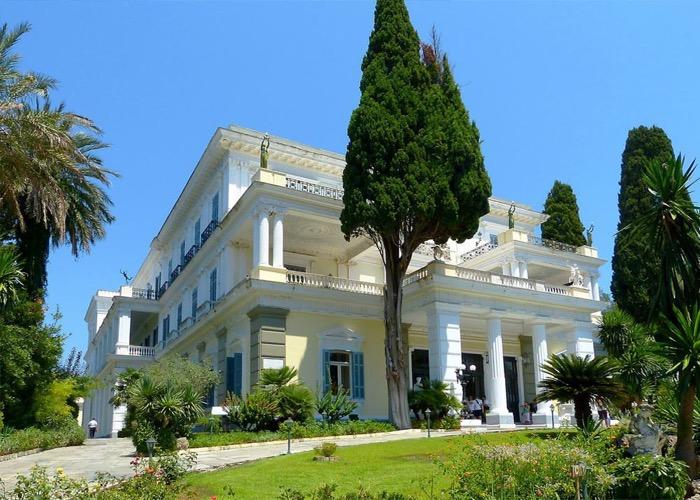 Some 20 minutes away from the city of Corfu is the Achilleion, a palace located at the village of Gastouri. Originally, the area belonged to the Corfiot philosopher and diplomat Petros Vrailas Armenis. In 1888, the Empress of Austria Elizabeth, more commonly known as Princess Sissy, visited the former Villa Vraila and decided to build a palace there to escape the oppressing royal court of Vienna. She actually wrote:

“...I want a palace with pillared colonnades and hanging gardens, protected from prying glances — a palace worthy of Achilles, who despised all mortals and did not fear even the gods.”

An army of artists and engineers were employed for different projects but the most iconic one is the statue of dying Achilles, the epicenter piece of the Gardens. Another impressive piece of art is Franz von Matsch,  the Triumph of Achilles decorating the monumental staircase of the palace. After Elizabeth's death, the property was sold to the German Emperor and King of Prussia Kaiser Wilhelm II, who visited often the palace and made it an important European diplomatic hub. In WWII, the Palace was requisitioned by the Nazi forces and the Wehrmacht demolished the stone bridge that connected the palace to the beach of Benitses. Today, the palace is a museum under the management of the Hellenic Tourism Organisation.

The old Fortress of Corfu 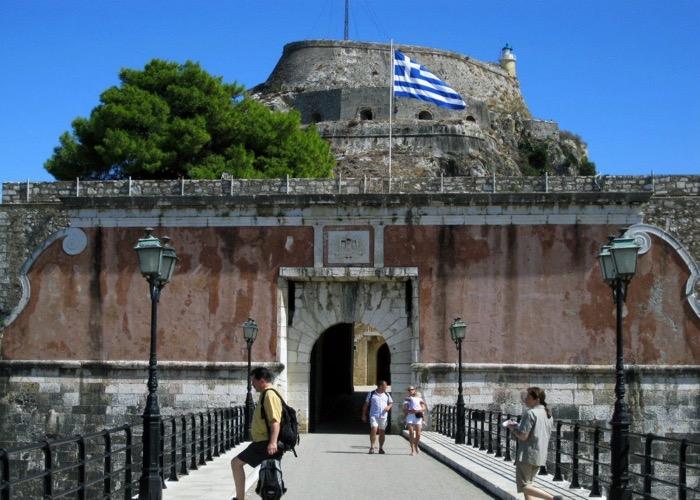 At the very heart of the old town of Corfu, the Old Fortress stands as a guardian of Corfu itself. In 1386, the people of Corfu under the threat of the Ottoman invasion and the disappointment from the Byzantine forces, asked the intervention of Venice, surrendering themselves to the Doge of Venice. This is the beginning of the Venetian rule that lasted for about four centuries and shaped the culture and history of the island. The Venetians quickly decided to exploit as much they could the old Byzantine fortifications and further expand the fortress for the security and control of the island and its waterways. In the 15th century, the fortress was already built and helped the defense of Corfu from the continuous tries of the Ottomans to invade it. It successfully repelled most of the foreign attacks and used to be the most elaborate defensive system of the island up until the construction of the New Fortress during the 19th century. During WWII, the Nazi forces that occupied the island imprisoned the thriving population of Jews that lived for centuries in harmony with the locals and transferred them to the concentration camps of Auschwitz-Birkenau. Just over 100 people managed to survive and return to Corfu. Today, the old fortress is an open site with all his facilities restored and hosts the Municipal Library of the island as well as the priceless State Archives of Corfu. Do not miss the chance to visit the church of St. George, a Christian temple that follows the ancient Greek architecture!

More in this category: « Corfu shore excursion ideas || The Best Beaches in Corfu Island »
back to top

What to see in the city of Corfu:

1. The old town of Corfu

3. The old Fortress of Corfu