Some 5 hours away (with the conventional ferry lines)  from the bustling port of Piraeus, Sifnos is a Greek island of dazzling beauty, inviting those seeking a memory-making destination. With high mountains diving into the Aegean blue sea, just approaching the island is an experience of its own. Perhaps one of the most ideal destinations for families and demanding travellers, Sifnos is the next island you definitely have to explore!

What to see on Sifnos:

What to do on Sifnos:

1. Discover the pottery tradition of the island

For such a small island floating between the nearby islands of Serifos and Milos, Sifnos holds quite a spot in Greek history. Archaeological excavations suggested the very first habitation on the island is dated around 5000 BCE. Many different people inhabited the island even before the arrival of the Greeks, such as the Leleges, the Carians, and the Phoenicians among others. All this came to an end according to tradition, after the decision of King Minos of Crete to conquer the island and put in charge his descendants.

Proof to that story stands the settlement of Minoa which is mentioned in ancient sources. In the 13th century BCE, the Achaeans had already spread throughout the Aegean region and Sifnos was not an exception. Ruins of the Mycenaean fortification structures on the top of St. Andrew mountain and that of St. Nikitas show how dominant the Mycenaean civilisation was during that time period.

In antiquity, the island was known with many names, such as Meropi or Aces but after the coming of the Ionians on the island, it was named Sifnos after the son of the Attican hero Sounios. Sifnos came to be a prosperous and fertile island with a dynamic population that exploited its natural resources.

Apart from the dependency of the population on agriculture, the Siphnians quickly discovered and started mining the island’s gold, silver and lead. The many abandoned ancient mines, scattered throughout the island show how intensively the inhabitants exploited the resources of the island resulting in a growing and advanced economy. It is known that the important island of Aegina, one of the formidable states of the ancient world, relied on the silver ores of Sifnos to mint its coinage. Sifnos had its own coinage but the minting involved was not of a scale comparable to that of Aegina. Nevertheless, Sifnos was definitely one of the wealthiest city-states of the 6th century BCE.

Proof to that statement stands the exquisite, dreamy treasury of the Siphnians built at the sanctuary of Apollo in Delphi. The facade of this temple-like building was dominated by the two maidens (korai) supporting instead of columns the entablature of the Treasury.

On the pediment, a battle between Apollo and Hercules over the sacred oracle-tripod caught the eye of the visitor while Zeus (according to some Athena or Hermes) tried to separate and calm down the two enraged gods. The four sides of the Treasury were also decorated by four friezes depicting Gigantomachy, scenes from the Trojan War, the abduction of Hippodamia and the Judgement of Paris. Painted with vivid colours of striking blues, whites and reds, it was certain that the erection of such a treasury was a deliberate wealth proclamation on behalf of the Siphnians at the Panhellenic sanctuary of Delphi.

Today, the visitor can marvel at the ruins of that magnificent piece of art at the Delphi Archaeological Museum. The island contributed greatly to the war against the Persians during the 5th century BCE, and participated in the Athenian League, an alliance founded to defend Greeks from any future Persian threat.

Apart from the ancient history of the island that continued with the Roman and Byzantine times, Sifnos played another important role in the Greek region during medieval times. After the conquest of the Aegean by the Latins after the Fourth Crusade and the formation of the Duchy of the Archipelago, the island was included as an addition to the territory of the Sanudo dynasty.

In the 14th century, a Knight Hospitaller Januli I da Corogna, dispatched Sifnos from the Sanudo control and proclaimed the island an independent territory up until the 17th century when the Gozzani family offered the island to the Ottoman Empire. In 1821, the Siphnians rebelled against the Ottoman Empire and participated in the War of Independence.

What to see on Sifnos 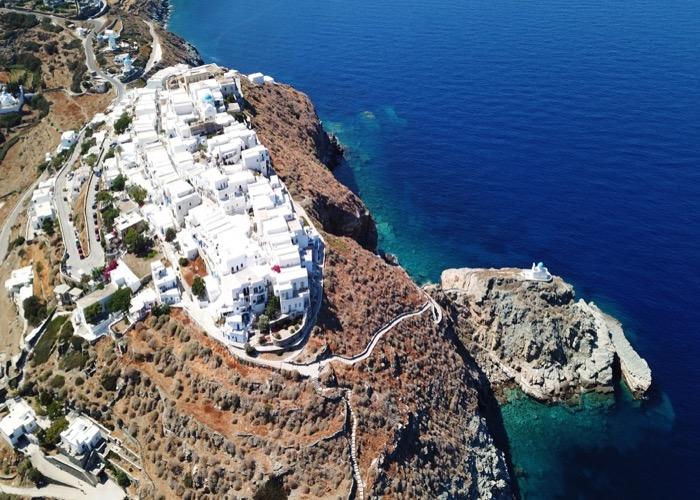 View of the town of Kastron in Sifnos - credits: Aerial - motion/Shutterstock.com

At the eastern part of the island lies the ancient town of Kastron, the capital of Sifnos from antiquity up until 1836. It is one of the most well-preserved medieval settlements to be found in the Cycladic region. The urban design of the Kastron ensures the protection of the inhabitants and the control of the seaways of the Aegean Sea. Today, the visitor can stroll around the narrow alleys and admire the typical medieval Cycladic architecture.

On the walls of the houses, the visitor can see ruins of ancient buildings, columns and funerary monuments incorporated into the modern structures. Follow up the maze-like streets to the highest point of the Kastron and spend some time gazing at the vastness of the deep blue Aegean Sea. Then, follow the signs to take you to the iconic little church of the Seven Martyrs located at the top of a conical hill close to the sea.

In the settlement of Kastron, you can also find the small archaeological museum of the island with many impressive artefacts reflecting the vast history of ancient and medieval Sifnos.

Originally two separate villages but today almost united, the neighbouring settlements of Apollonia and Artemonas are named after the divine twins Apollo and Artemis. The churches of Panagia Yeranofiora and Panagia Kokhi stand on top of the ancient temples of Apollo and Artemis respectively.

Do not miss the chance to wander around the picturesque streets of the town and let the aesthetic of Cyclades sink in. For those wanting to have drinks and discover what the island has to offer regarding nightlife, Apollonia is the place to be. Otherwise, you can always walk up to Artemonas and taste the delicious traditional desserts and pastries found in local workshops. Do not miss the chance to visit the charming Museum of Folk Arts and see for yourselves how life on a Cycladic island used to be in the past. 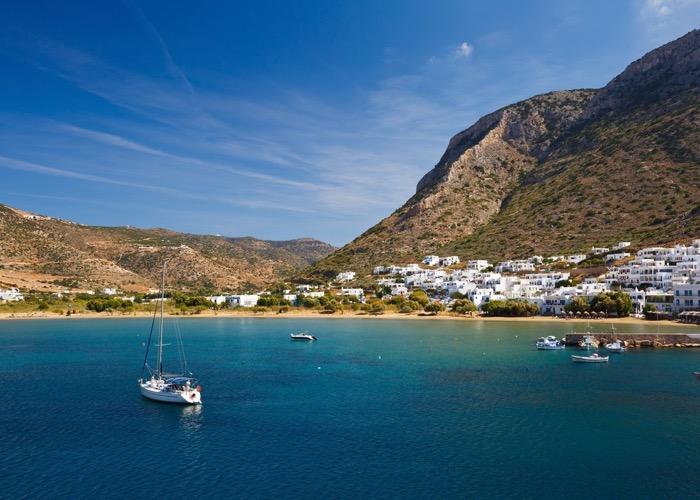 The first site you are going to witness when arriving Sifnos is the picturesque port of Kamares at the western shores of the island. Originally a fishing village, the bay of Kamares is surrounded by high mountains with numerous caves. Despite the fact that nowadays Kamares is the official port of the island, somehow it does retain some of its past beauty and traditional taste.

With many options for you to choose from (traditional tavernas, modern restaurants, cafes, and bars), Kamares is the place to enjoy a meal or drink by the seaside. Do not miss the opportunity to climb to the church of Agia Marina and enjoy a majestic sunset!

What to do on Sifnos

Discover the pottery tradition of the island

Perhaps the trademark of Sifnos, the pottery tradition is one of the most dominant commercial activities still happening on the island. With countless small workshops and many pottery experts, this Cycladic pottery-mecca is the place to be for every pottery lover. After all, even since ancient times and even today, the most renown potters of Greece come from the island of Sifnos.

Discover the traditional vessels of Cyclades and get your hands dirty by trying to make your own pots. From cooking vessels to chimneys, plates, cups, etc., it seems that everything on Sifnos is made out of clay! Let yourselves immerse into the tradition of the island and experience its history through the humble craft of pottery. 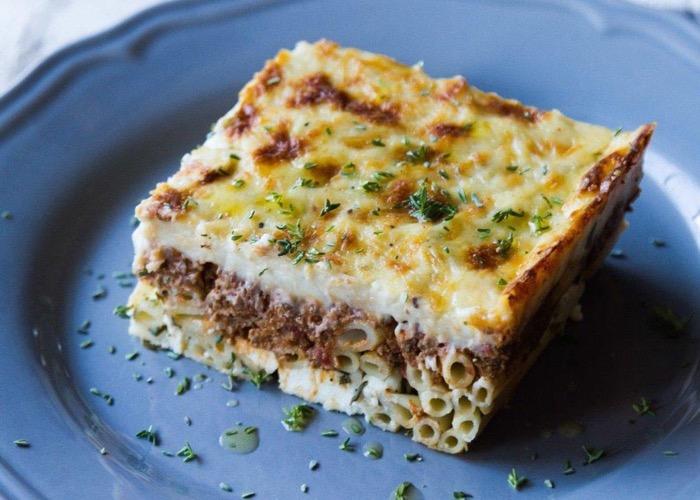 The place to be for every foodie, Sifnos offers a wide variety of traditional Cycladic recipes for you to choose from. Meat stews cooked in clay pots, fresh vegetables, legumes and fruits, traditional pasta, and delicious pastries are only some of the dishes you have to try!

The long culinary tradition of Sifnos is reflected by the figure of Nikolaos Tselementes, a Siphnian which came to be the most known Greek chef ever! His name was so popular that in modern Greek the word for a cookbook got his name. He was also responsible for making the Greek traditional cuisine international, and known throughout the world with dishes such as moussaka and pastitsio! The people of Sifnos are so proud of Tselementes that they hold every year a culinary festival to honour the work of the famous cook!

Sifnos is definitely a destination that will surely satisfy your wanderlust! However you choose to spend your time there, from making pots and tasting the authentic local cuisine to discovering the rich past of the island and wondering to the well-preserved trail network, Sifnos guarantees a memorable experience with pristine beaches for every traveller type and a family-friendly environment.

Do not waste more time and plan your own trip to Sifnos or check out one of our Greece tours & Greek island tours.

Get in touch with our travel specialists and design the ideal family trip to Greece!

More in this category: « Best Greek Islands for Families || Greek Island Hopping: How to island hop in Greece in 2022 »
back to top

What to see on Sifnos:

What to do on Sifnos:

1. Discover the pottery tradition of the island