The violet-crowned city of Athens counts thousands of years of age, carrying a world of history and culture in its shoulders; two elements that are evident in the fascinating archaeological sites that dominate the city’s most central spots.

One of those archaeological sites is the Temple of Olympian Zeus,  one of the most significant remnants of antiquity that decorates the city center and can be admired from afar by both locals and visitors strolling the streets of the Greek capital.

If you get close, however, what is it that you’ll see?

The temple of Olympian Zeus is located approximately 500 m south-east of the Acropolis,  and about 700 m south of the center of Athens, Syntagma Square. It was built with the intent of being the largest temple in ancient Greece and succeeded in its goal. Being the largest temple during the Hellenistic and Roman years, its construction began in 515 BC by Peisistratus' grandson, Peisistratus the Younger.

Construction of the Temple

According to Aristotle, Peisistratus decided the construction of the famous temple following the well-known tactics of many other tyrants, who tried to please the crowds and gain popularity in order to avoid having the citizens rebel against the harsh government. In a contradictory theory, however, supported by ancient Greek traveler Pausanias, the temple was founded by Deucalion, the ancestor of the Greeks, to honor Zeus who saved him from a flood.

When the tyranny of Peisistratus was overthrown, the project was halved, but a huge amount of building material had already been collected. Part of this material was used 30 later in the construction of the Themistocleian Wall. Many tried to continue the erection of the temple. 300 later, in 174 BC, Antiochus IV, the eminent king of Syria, sought to continue the work of Peisistratus using Roman emperor Cossutius as the architect.

Again, however, the temple was left without a roof and gables. Eventually, however, the Temple of Olympian Zeus was completed in 132 AD by Hadrian, who came to Athens in 124 AD, became an Athenian citizen, and benefited the city greatly. 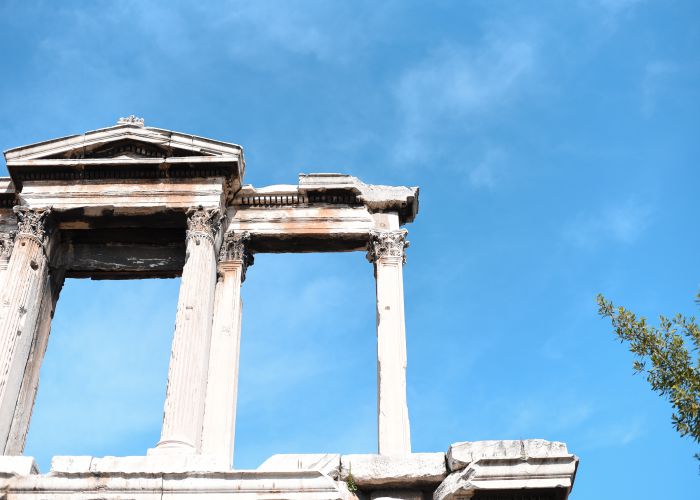 Hadrian built the well-known gate that took his name, now called Hadrian’s Arch, near the wall that separated the new from the old Athens of the time. In its final form, the Temple of Olympian Zeus is made of Pentelic marble. Its rhythm is Corinthian. Its length exceeds 100 meters and its width spreads across 40 meters. As for its famous columns, some of which are pretty much the only thing that has survived today, the total was  104.

They were 17 meters high and 2.6 meters in diameter, while each weighed 364 tons! The temple was built in imitation of the temples of Artemis in Ephesus and Heraion in Samos.

Both the temple itself and the surrounding area was decorated with a number of statues of Hadrian, the gods, and personifications of the Roman provinces. Additionally, a massive statue of Hadrian was built behind the building by the Athenians in order to honor Hadrian’s generosity. Just as massive of a statue, this time of Zeus, was placed inside the temple. Legend has it that for this statue Hadrian used chryselephantine, a material that even at the time used to be considered as outdated, on purpose, mimicking Phidias' statue of Athena in the temple of Parthenon, in order to attract attention both to the temple and to himself.

The majority of information regarding both the surroundings and the interior of the Temple of Olympian Zeus has reached as through the books of Pausanias, who describes the temple as it was in the 2nd century with the following words:

‘Before the entrance, I say, stand statues of Hadrian, two of Thasian stone, two of Egyptian. Before the pillars stand bronze statues which the Athenians call ‘colonies.’ The whole circumference of the precincts is about four states, and they are full of statues; [….] Within the precincts are antiquities: a bronze Zeus, a temple of Kronos and Rhea and an enclosure of Gaia (Earth) surnamed Olympias [….] There are also statues in Phrygian marble of Persians supporting a bronze tripod; both the figures and the tripod are worth seeing.’ 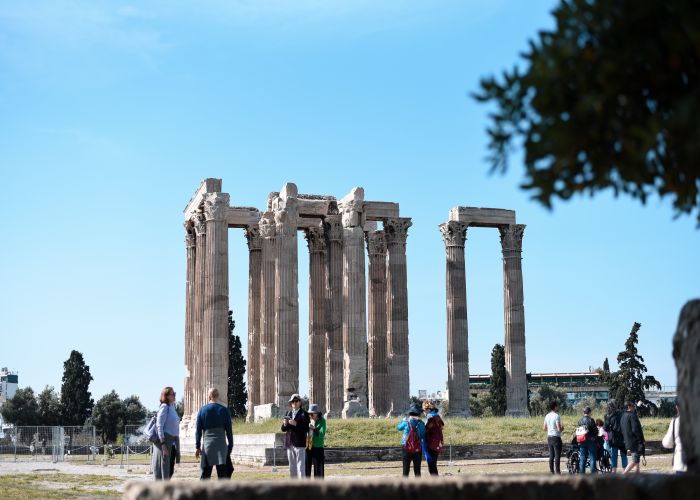 From 500 AD the temple began to gradually collapse and the columns began to fall, while the temple provided building materials for the construction or the renovation of the houses and churches of medieval Athens. Interestingly, we know exactly what happened to one of the columns of the Temple of Olympian Zeus, as it was written on one of the surviving columns.

The inscription reads ‘on 27 April 1759 he pulled down the column’, with the subject of the sentence referring to the Turkish governor of Athens, Mustapha Agha Tzistarakis, who allegedly re-used the marble of the column to make plaster for the Tzistarakis Mosque that now adorns the vibrant Monastiraki Square. Until the beginning of the 19th century, only 16 of the temple’s columns stood still, but a terrible storm in 1852 threw another, which remains in the same place it fell today.

The temple was excavated by the same person who played a significant role in the restoration of Parthenon, Francis Penrose of the British School in Athens, in 1889–1896. It was further excavated in 1922 by the German archaeologist Gabriel Welter, and in the 1960s by a group of Greek archaeologists led by Ioannes Travlos.

The Temple of Olympian Zeus, or more precisely the leftover columns, dominate the entrance of Athens and shows the difference of mentality and culture between the ancient Greek architecture and the Roman one. Today, the remnants of the grand temple serve as an open-air museum favored by the visitors who are eager to unfold the complex story of Greece in general and Athens in particular.

One can’t deny that the fascinating sight of the ancient columns, in total contrast to the modern city of Athens, invited people to a journey through Athens’ history, mythology, and culture!

Share this:
More in this category: « Ancient Greek Philosophers || The First Olympic Games in Greece »
back to top