Are you spending Christmas in Greece this year? In case you are waiting for Santa and his reindeers to arrive, here are some things you might have to know about Greeks and the holidays of Christmas.

1. Put an onion upon your door

2. Everybody knows a turkey and some mistletoe. Or not.

3. Rockin’ around the Christmas boat

5. Agios Vasilis is coming to town

Christmas is here, and everyone is excited about decorating their homes while waiting for the coming of Santa Claus. It is the time of the year when Christmas lights are to be found everywhere and when the smell of freshly baked cookies is something not to resist. The epicenter of them all, the festive Christmas tree decorated with cute little ornaments and sparkling balls. One can imagine that Christmas cannot happen without a Christmas tree and stockings but, obviously, you have not considered of the Greeks. While counting down the days for Christmas, here is a list of some absolutely irreplaceable Christmasy things that Greeks do differently.

Put an onion upon your door

An integral part of decorating for Christmas is putting a Christmas wreath upon your door. Now, take down that wreath and make some space to put your jolly, Christmasy squill! This bizarre custom of hanging uprooted onions on their doors is something that Greeks do for centuries. This type of squill, scientifically named as Drimia maritima, can be found throughout the Mediterranean region and almost everywhere in Greece. According to tradition, every New Year’s Eve, the housewife of each family uproots this bulb from the soil and hangs it on her door. The reason? This bulb is so resistant to any conditions that -even uprooted- it still continues to grow large spear-like leaves and a white flower. Therefore, it was and still is considered a symbol of fertility and immortality, two things necessary for the New Year to come.

Everybody knows a turkey and some mistletoe. Or not.

Who does not know the famous Nat King Cole’s song? "Everybody knows a turkey and some mistletoe, help to make the season bright." And surely they do! But how about replacing the roasted turkey with some pork stew? Despite the fact most people cannot think of a Christmas table without turkey, Greece says otherwise. Turkey is not indigenous to the Greek region, therefore, there it is not included in the typical Greek cuisine. Hence, for centuries, the warming Christmas dish that everyone was waiting for was a plate of hot pork stew with celery and herbs. In other Greek provinces, the custom dictated roasted pork with vegetables but everyone agrees on the fact that Christopsomo is a must-have addition to their Christmas table. Christopsomo is a type of bread Greek people prepare deliberately for Christmas days and it is often decorated with elaborate patterns on its upper surface.

Rockin’ around the Christmas boat 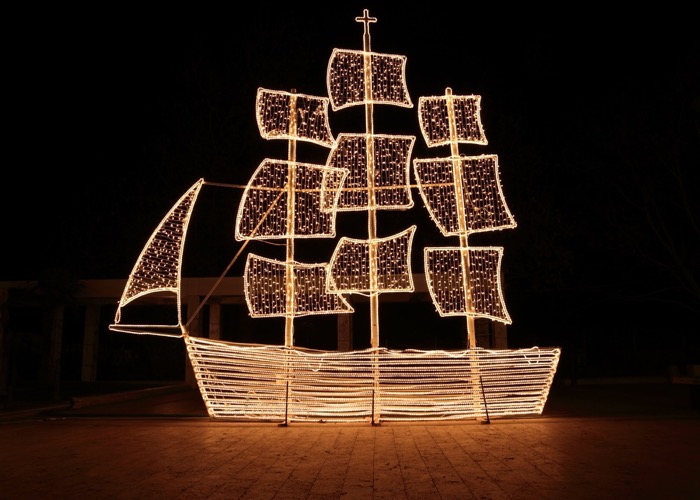 The very centerpiece of every household during the Christmas season is the adorned by everyone Christmas tree. Putting up a tree inside your home never crossed the mind of the Greeks and therefore, this custom was completely alien in Greece until the end of the 19th century. Truth is, it really started catching up only after the 1950s. Traditionally, Greeks put a small boat in their houses and decorate it with colorful sails and candy. Well, this totally crazy idea has a very good reason behind it. Just by looking at the map, one can see that the country is literally surrounded by water and consequently, one of the most popular professions was one of the sailors, the fisherman or the captain. A large amount of the Greek population used to make their living out in the sea, and most of the times they remained separated from the families for quite some time. On Christmas Eve, young children used to fashion small boats out of perishable materials and with the company of musical instruments and their friends, they used to wander the neighborhoods singing the Christmas carols.

In this Greek version of trick or treating, the children used to collect many candies and holiday treats on this small boat while searching for the next door to knock on. Eventually, through the passing of centuries, the custom of putting up a small Christmas boat came to be the true Greek tradition. The first time a Christmas tree was decorated in Greece, was in 1833 when King Otto, following his traditions, put up a tree in his palace. At that time, the Greeks that saw that spectacle considered the fact that maybe their king was out of his mind. After the middle of the 20th century, more and more houses started buying Christmas trees resulting in the prevalence of this tradition instead of the humble boat. Today, not a single Greek home misses its Christmas tree but there is always a place for the small boat nearby.

It’s Christmas Eve and kids in Greece, after having swarmed the neighborhoods singing the Christmas carols, they return home and prepare for a good night sleep. Now just before going to bed, usually kids leave some cookies and milk to thank Santa for bringing them the gifts they asked for. In Greece, there are two mistakes in this sentence. First, they leave no cookies and milk but some melomakarona and kourabiedes instead. These traditional Christmas treats have a history of thousands of years and they are a must of the Christmas holidays. Melomakarona is a type of baked cookie with crushed walnuts, bathed in hot honey syrup to soak in as much as possible. On the other hand, kourabiedes are rich-butter soft cookies with almonds, sprayed with rose water and covered with layers of mouth-watering powder sugar. The second mistake lies in Santa himself. For the Greeks, Santa is coming to town on New Year’s and not on Christmas, so you have to wait a bit longer. After all, Santa is working round the clock, and what is the best way to thank him than an explosion of honey and sugar?

Agios Vasilis is coming to town

You’d better watch out, you’d better not cry, you’d better not pout I’m telling you why… Santa Claus is coming to town! The father of Christmas is on his way this Christmas and everyone is excited about his arrival. The Christmas stockings are up on the fireplace and on Christmas Eve, some milk and cookies are waiting to thank Santa for his gifts. For the kids in Greece is bad news. Santa is not coming on Christmas Eve but on New Year’s Eve. Why? Because the Greek Santa is rather different from the known one. His name is Agios Vasilis and he is one of the three Holy Hierarchs of Christianity. He lived in the 4th century and was the bishop of Caesarea in Cappadocia, nowadays Turkey. One of the most influential hierarchs of early Christianity, he shaped the newly-born Christian Church through his pluralistic knowledge of theology, philosophy, and politics. During his studying years, he moved to Athens, the most prestigious academic environment of that time, and got befriended with Gregory of Nazianzus (the second Holy Hierarch) and even with the Roman Emperor Julian the Apostate.

According to legend, St. Basil the Great led a virtuous life, having at the center of his focus the benefaction of the poor ones and especially of young kids. One event of his life though is commemorated every New Year’s Eve in every Greek household. During his office as a bishop of Caesarea, St. Basil had to deal with a siege from an enemy army. In order to keep everyone safe, he asked from the wealthy citizens of Caesarea to collect as much money as possible to pay a ransom for the protection of the city. St. Basil handed the money to the invader only after scolding him about the injustice of his acts. Persuaded that his actions were against the word of God, the leader of the enemy army ordered the withdrawal of his men and left the city unharmed. The next day, St. Basil had to confront the following situation: he had to return the money to the citizens, but he did not know how much money each person had contributed to the cause. Instead, he came up with another solution. He prepared batches of bread, and inside each loaf, he placed a golden coin. By sharing them in the morning mass, he made sure that all the money were returned to the city but this time, it was redistributed to everyone. The custom of re-enacting this event is honored every year with the preparation of Vasilopita, a pie that bears the name of the saint. Every household hides a golden coin in the pie and then it is shared with all the family members. The person to find the coin is the winner of the night and he is granted with the blessings of a year of luck and prosperity.

So, if you put an onion on your door, eat a dozen of melomakarona and kourabiedes and wait for Agios Vasilis instead of Santa Claus, it is sure that your Christmas holidays in Greece will be an unforgettable experience for you. If you are in Athens this year, engage in a Christmas food tour around the city, plan your own visit to the jolliest locations of Greece or check out one of our Greece tours.

More in this category: « Have you been naughty or nice? || Greek Easter Traditions During Holy Week »
back to top

1. Put an onion upon your door

2. Everybody knows a turkey and some mistletoe. Or not.

3. Rockin’ around the Christmas boat

5. Agios Vasilis is coming to town