Demeter - which literally translates to 'Mother Earth'- is one of the most ancient deities of the Greek pantheon.  Dearly loved by ancient Greeks, Demeter was commonly thought to be a benevolent deity, tending to the people's needs, but with her dark side too when challenged. Many myths and legends orbit around the figure of Demeter often symbolizing different qualities of nature. One of them is the moving story of Demeter and her beloved daughter Persephone.

Demeter was the goddess of grain, agriculture, and fertility. She was the older sister of Zeus, one of his released siblings from Cronus belly. She immediately stood by Zeus' side and fought with him against the Titans. Demeter was principally a mother-deity of the ancient Greek world. One of her children was Persephone - also referred to as Kore- which proved to be her dearest one but also the one who broke her heart. Demeter and Kore used to be as inseparable in life and in worship, with their most prominent cult being established at the sanctuary of Eleusis. According to Pausanias, Eleusis' sanctuary and its festival were so significant to ancient Greek religious practice, that could only be compared to the Olympic Games, hosted in the region of Olympia. 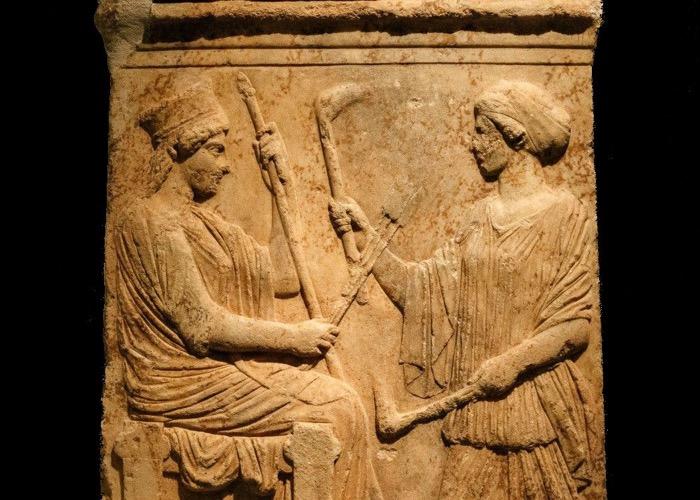 Demeter and Kore, 5th BC,  Archaeological Museum of Eleusis - en.wikipedia.org

Demeter was overprotective towards her daughter, always trying to keep her safe, especially from the male gods. One day, Persephone was relaxing with the company of the water Nymphs known as Oceanids, on the plains of Nysa. Persephone was a young woman of dazzling beauty, therefore, Hades, the lord of the Underworld, could not help but notice it. He fell madly in love with young Persephone and decided to make her his wife at any cost. On the fields of Nysa, he made a wonderful flower to blossom, so beautiful that no one could resist it. By the time Persephone saw the flower, she got so amazed by its beauty that she inadvertently tried to touch it. Then, a chasm on the surface of the earth opened, and through it, Hades riding his golden chariot with his immortal horses grabbed the terrified Persephone, leading her to the Underworld.

The scream of Persephone echoed around the world. Demeter, shocked, immediately set out to find her daughter. She wrapped a black shawl around her shoulders and just like a hawk she searched everywhere for poor Persephone. She asked everyone she met, mortal or god, whether they knew anything about the fate of her daughter. Unfortunately, no one wanted to betray the mighty god Hades. Only Hecate, the three-faced goddess of magic, and sorcery stood by her side and informed her that Hades had something to do with Persephone's disappearance. Together, they asked the Sun who confirmed their fears. Desperate, she mourned for her daughter, believing that she had perished for good. Her mourning was so intense that she left her palace in mount Olympus and stopped tending to the earth and providing goods to the people. The crops died, the lands became barren and nothing could grow out of the earth. Famine fell upon the world and the human race came close to extinction.

Watching the disaster provoked by the absence of Demeter, Zeus sent Hermes -other versions of the myth present Pan instead of Hermes- to find her and persuade her to return to Olympus. In the meantime, Zeus asked Hades to release Persephone and allow her to ascend to the Upper World. Hades, not being able to oppose to the wish of his brother, allowed Persephone to go and reunite with her mother but just before she left, he gave her some pomegranate seeds to eat. Little did Persephone know that once you eat something in the Underworld you can never fully escape from it. She was eventually reunited with her mother and order was re-established in the world. Unfortunately, due to the consumption of those pomegranate seeds, Persephone had to return for a certain period of the year in the Underworld, to her husband  Hades.

This ancient myth has been interpreted in many different ways but the most apparent symbolism is the concept of earth's fertility and the interchange of seasons. This story operated as the epicenter of the mystical Eleusinian festival held at the sanctuary of Demeter and Kore at Eleusis, at the eastern part of Attica. The worshippers of the festival had to be initiated in order to participate in the events. During that ritual, they had to take an oath not to reveal the events of the Mysteries (festival) to the non-initiated. The penalty for the violators was death. The festival known as Eleusinian Mysteries was pivotal toancient Greek culture and many important figures of the ancient world became mystes (the initiated ones)  such as Aeschylus, the Athenian playwright, and Hadrian, the Roman Emperor, among others. 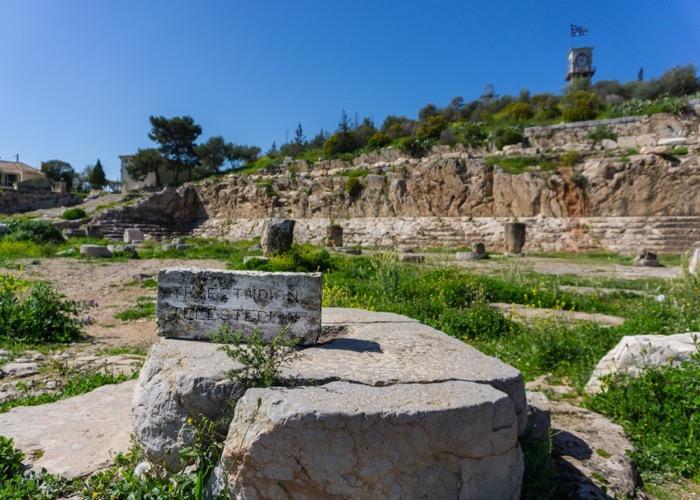 The story of Demeter and Kore is ancient and timeless capable of moving people to tears even today! The sanctuary of Eleusis, with the sacred Telesterion and its impressive ruins, help the visitor to immerse into the ancient world and experience this mystical part of antiquity. Therefore, a visit to Eleusis is a must for every visitor of Athens! Plan your own visit to the site of Eleusis or check out one of our Greece tours.

More in this category: « Mikis Theodorakis – Composer, Activist and Patriot || Following the Labors of Hercules »
back to top