Athens is the capital of Greece, a beautiful city full of history and culture, but have you ever wondered where its name comes from?

1. How the fight between Athena and Poseidon came to be

2. The fight that determined the patron of the city

3. The result of the fight

4. The sacred olive tree of Athena

The ancient city is named after the goddess Athena and the story of its origin, like many others of the Greek Mythology, is one of intrigue and grandeur and it begins the way all great tales do.

Once upon a time, according to the myth, there was a king named Cecrops. Although he was a human, his body had a serpent's tail above the waist. However, that didn't stop him from being the ruler of a very beautiful city, beloved by all of its residents. The original name of the city was ‘Coast’ or ‘Aktiki’, named after the very first king of the lands, King Aktaion.

During his rule, King Cecrops, wishing to find a better name for the city, worthy of its beauty and grace, called upon the twelve gods of Olympus and asked who would wish to become the patron and protector of his city. Of the twelve gods, two of them came forward as willing candidates: Athena and Poseidon.

Now that was a proper challenge! Athena was the goddess of wisdom, war, and crafts, while Poseidon was the god of the sea, storms, horses, and earthquakes. Neither of them was willing to back down, so in an unusual reversal of power, it was the mortal King Cecrops who decided that the gods should compete against each other so the victor could become the patron of the city.

In this contest of Athena vs Poseidon, it was determined that each god should offer their best gift, and the king, the people of the city, and the remaining gods, would decide which was more impressive.

Both gods were summoned to the Acropolis to present their gifts. First came Poseidon. Striking the ground with his trident, the rock ruptured and saltwater came gushing out of the ground until a small lake had formed. Being a seafaring nation, he was certain the mortals would wish to have a god who could command the ocean as their protector. 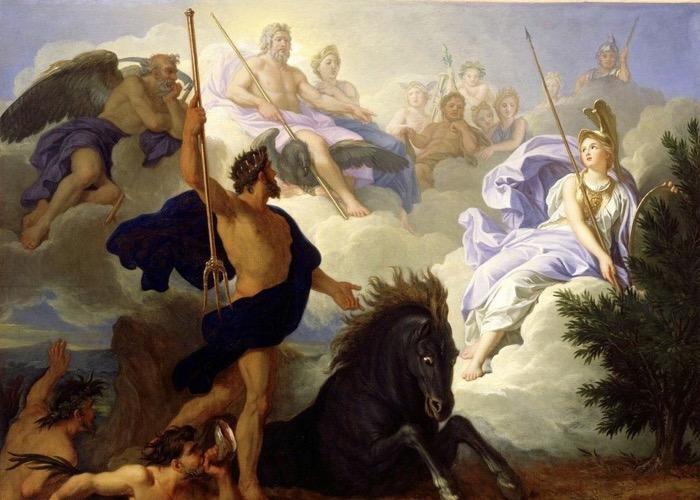 The wise Athena was not daunted. She planted the seedling of an olive tree on the rock, which immediately grew and bore olives, enough to feed all the people of the city. Watching the contest, Zeus -king of the twelve gods of Olympus- asked the other gods to judge which gift was best.

Cecrops, in turn, addressed his people who began to shout "olive!". As he considered the gifts and his people's desire, he favored Athena's offering, as he believed it would prove to be the most precious of the two for the city. Thus, the king and the people of Athens pronounced the winner and the new patron goddess of the city, with the city being duly named Athens or ‘Αθηνα’ in Greek, in her honor.

Also, Athens' sacred symbol became the olive tree that was gifted by the patron goddess. It was so much appreciated their currency depicted goddess Athena with an olive wreath on her helmet. The people of Athens loved the goddess of their city so much, as well as everything she offered them, that they later built temples in her favor. The world-famous Parthenon is a temple dedicated and named after her.

The tree gifted by Athena is said to have survived for many years. In 480 BC, when the Persians under the rule of Xerxes attacked Athens, they burned the sacred olive tree as a sign of dominance. The Athenians were devastated, but the very next day the dry and burnt trunk of their beloved olive tree began to rejuvenate. This was taken as a foretelling that Athens would once again stand tall and as a sign of their resilience, even in the face of adversity. 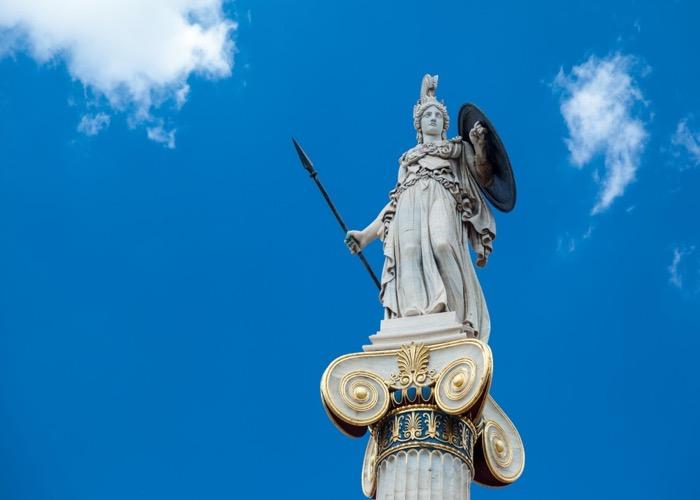 Legend has it, that seeds from the sacred tree in Athens were then planted across Attica and that the olive trees that surround the city of Athens are its descendants, which continue to ensure the success of olive cultivation to this day; a symbol of Athena's enduring gift. An olive tree can in fact still be seen today at the top of the Acropolis. This, however, is not the original one from the myth. Instead, it was planted in 1952 with a surviving branch from the tree that was all but destroyed during the German invasion during the Second World War. As you can imagine, the olive tree continues to be an important symbol of Athens to this day.

Discover many more fascinating Greek myths on our Mythological walking tour of Athens. Let us introduce you to the gods, heroes, mortals, and mythical beasts that featured in the everyday lives of ancient Athenians and still capture the imagination of people around the world.

More in this category: « Filotimo & Charmolipi: Two Greek Words that Carry a Special Meaning || Carnival in Greece »
back to top

1. How the fight between Athena and Poseidon came to be

2. The fight that determined the patron of the city

3. The result of the fight

4. The sacred olive tree of Athena