Continuing our quest for the best island destinations just an hour away from Athens, we introduce to you the island of Aegina, ideal for escaping the rising temperatures of Athens and getting a taste of an authentic Greek island experience!

1. Visit the temple of Aphaia

3. Sail to the islet of Moni

4. Spend some time in the old town of Aegina

The island of Aegina is the second-largest island of the Saronic Gulf and holds a really important place in Greek history. One of the close to Athens island destinations, with only an hour-long distance from the port of Piraeus, Aegina is an excellent destination to combine archaeological sites, monuments, and landmarks related to modern Greek history, with long, stretched sandy beaches and picturesque secluded islets. Here you will find the best attractions of Aegina island that you should absolutely visit during your stay.

Visit the temple of Aphaia 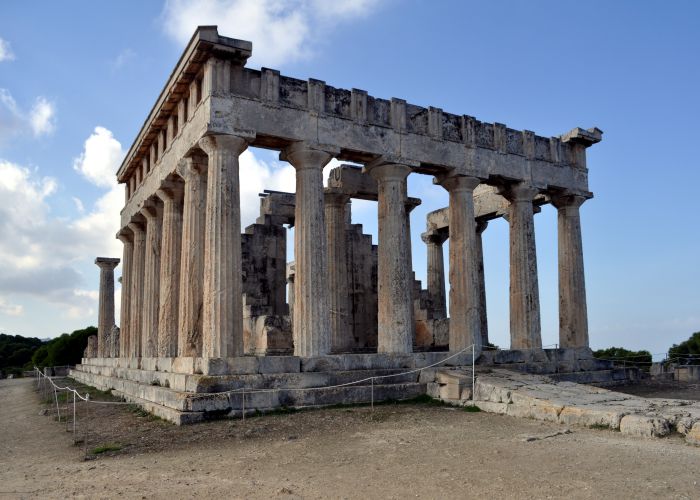 The Temple of Aphaia - credits: en.wikipedia.org

Situated in the eastern part of Aegina island, the temple of Aphaia is one of the most impressive ancient temples in Greece. The temple faced numerous construction phases since the Bronze Age but particularly after the Archaic times. The existing ruins belong to its latest phase, in 500-490 BC. Originally, the sanctuary, where the temple is located, was dedicated to the Aeginetan deity Aphaia, a deity of fertility often associated with the Cretan deity Vritomartis. After the Athenian domination of the island, the cult of Athena, of the Olympian gods, was merged with this local deity, along with a cult of Artemis. Pausanias in the 2nd century AD said:

"On Aegina, as one goes toward the mountain of Pan-Greek Zeus, the sanctuary of Aphaia comes up, for whom Pindar composed an ode at the behest of the Aeginetans. The Cretans say (the myths about her are native to Crete) that Euboulos was the son of Kharmanor, who purified Apollo of the killing of the Python, and they say that Britomartis was the daughter of Zeus and Kharme (the daughter of this Euboulos). She enjoyed races and hunts and was particularly dear to Artemis. While fleeing from Minos, who lusted after her, she cast herself into nets cast for a catch of fish. Artemis made her a goddess, and not only the Cretans but also the Aeginetans revere her. The Aeginetans say that Britomartis showed herself to them on their island. Her epithet among the Aeginetans is Aphaia, and it is Diktynna of the Nets on Crete."

The temple stands on the top of a hill, following the Doric order, and built entirely out of local limestone. Due to its location, it creates two imaginary triangles, one with the temple of Poseidon in Cape Sounion and the temple of Hephaestus in Thissio and another one with the temple of Apollo in Delphi and the Parthenon of Athens. Ever since antiquity, it was known for its wonderful sculptures made out of Parian marble which decorated its pediments. On the west side, there was a depiction of the second Trojan War (the one narrated by Homer) including the notable figure of Ajax.

In the east, there was a depiction of the first Trojan War, with Telamon and Hercules fighting against the king of Troy Laomedon. The central space of those two pediments was occupied by statues of the goddess Athena. The sculptures were discovered by the English archaeologist Charles Robert Cockerell in the 19th century, when he was conducting excavations at the temple, during his Grand Tour. After their discovery (and the removal of those still in place), they were sent to Zakynthos island and then to Malta where eventually, the King of Bavaria Ludwig I bought them at auction. Nowadays they are on display at the Glyptothek of Munich. 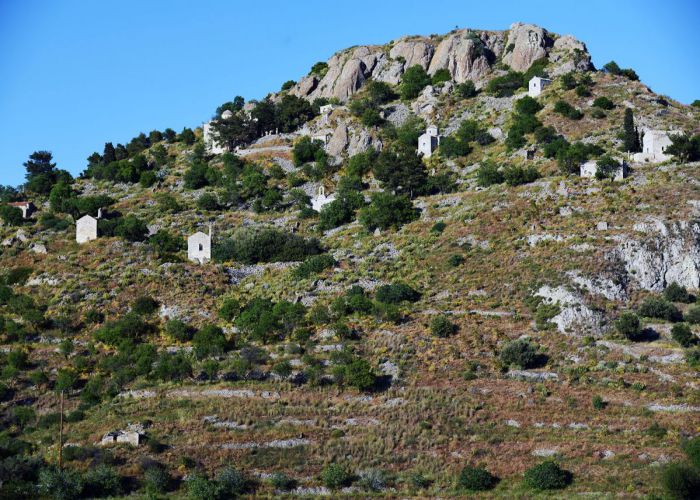 After the end of the Peloponnesian War, Aegina was not able to recover from the continuous clashes and warfare. In the 2nd century AD, Pausanias, who visited the island, admitted that most of its ancient monuments were left in ruins, the old port was under the sea and generally, nothing really raised his interest. During the coming years, many invasions that happened in the mainland of Greece, resulted in the relocation of groups of people towards the island, boosting that way the economy and social dynamics of Aegina once again. In the 10th century, piracy forced the Aeginetans to leave the coastal areas and found a settlement in the mountainous region of the Aegina island, to ensure their protection.

Therefore, the Aeginetans decided to establish the new capital -Paleochora- of their island approximately at the center of it, and the settlement remained its main town for many centuries. Paleochora suffered numerous attacks and invasions over the years with one of the notorious pirates Barbarossa in the 16th century being the most memorable one.

After the end of the 18th century though, the islanders abandoned Paleochora and resettled the coastal areas of their island. Nowadays, the visitors of Paleochora can walk among the medieval ruins of the settlement and visit the Byzantine churches with their magnificent frescoes. Without a doubt, this destination is a must-see site of Aegina, often described as the Mystras of the island. At the site, you will find 38 of the 366 churches Paleochora used to have, worth visiting for their architecture and murals that still survive to this day. At the top, you will find features of the Venetian castle, a Greek castle built in 1654, as well as enjoy the spectacular view of the island.

Sail to the islet of Moni 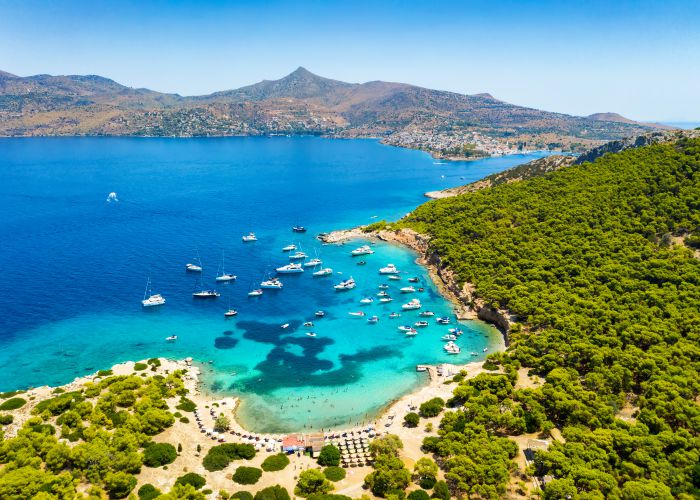 In case you want to swim in the waters of an uninhabited islet full of dense pine forests and sandy beaches, Moni islet is the place to be. In order for you to get there, head to the town of Perdika, located in the southern part of the Aegina island and one of the most beautiful of its regions, and hop on a small boat that will take you to this small paradise. Just 500 meters away from Aegina, the islet has nothing but a single monastery on it. Wander around its lush forests, hike to the highest point of the islet, and enjoy the panoramic view of Aegina and the Saronic Gulf.

While there, you will have the chance to see from up close the islet's wildlife, which includes deer, wild goats, and peacocks! Moni is being protected as a natural park, therefore regulations over littering and camping are quite strict. Choose its beach to relax and finish your day in one of the few delicious taverns found at the port of Perdika, for you to explore the riches of Greek cuisine. Aegina is quite popular for its seafood dishes!

Spend some time in the old town of Aegina 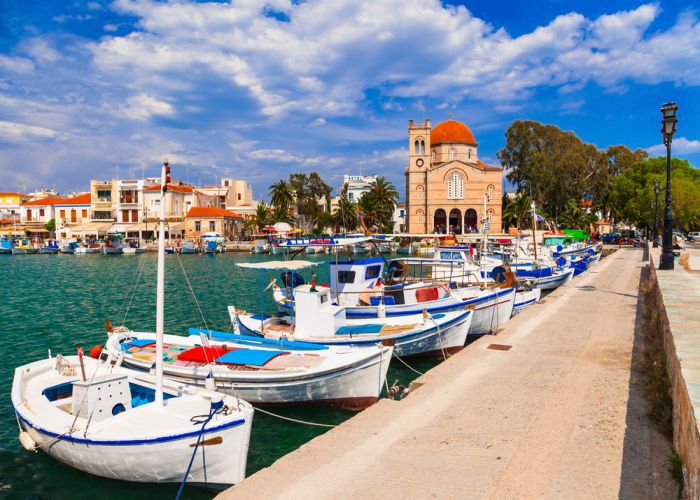 The town of Aegina is one of the most historic towns of Greece, closely related to the modern history of the country. Except for the picturesque alleyways of the old center, you can choose one of the sites located nearby, which reflects the history of the island from prehistoric times up until the 19th century. Right next to the port, the archaeological site of Kolona, includes the Late Neolithic (4th mill. BC), the Bronze Age settlement (2600-2500 BC), and the sanctuary of Apollo (with one column of the temple still standing) that lasted up until the 3rd century AD.

In addition, you can visit the Venetian tower of Marcellus (17th century), located inside the old town, or discover the importance of Aegina regarding the history of the New Greek State. After the Greek War of Independence, Aegina was chosen by the first governor of Greece, Ioannis Kapodistrias as the first capital of the State in 1827. Ioannis Kapodistrias founded on the island the first archaeological museum of Greece, the first national library, public school, and orphanage, all of them still existing today! After the relocation of the capital to Nafplio in 1829, Aegina lost its political importance but remained an important urban center in the Saronic Gulf.

There is no way you will visit Aegina island without trying something pistachio flavored! Most known for its award-winning pistachio production, you will fall in love with the local delicacies including it. Directly with its skin is a great healthy snack for when you get late-night cravings. You can also feel refreshed with some pistachio-flavored ice cream or satisfy your sweet tooth with a breakfast pistachio spread and handmade sweets. Don’t miss the chance to try Aegina’s local product in a traditional pasteli, a sweet bar dating back to Homer’s time! 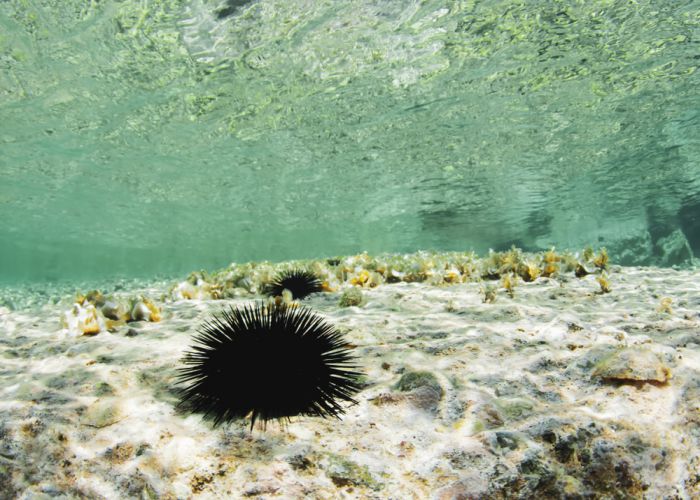 Looking for more things to do in Aegina? The beautiful beaches of Aegina island are waiting for your exploration. Enjoy the turquoise waters of Agia Marina and Souvala, the most popular beaches in Aegina. Soak up the sun on the sandy coasts before finding shelter in one of the many taverns and hotels of the areas. If you want to get away from the crowd you can try the secluded beach of Marathon, a picturesque fishing village, or Vagia, with the most beautiful green scenery in Aegina.

Are you feeling a bit adventurous? Get that sweet adrenaline rush by going scuba diving in Aegina’s mesmerizing waters. Whether you are a skilled diver or just a novice, you can explore the deep blue making your vacation to Aegina an unforgettable experience.

From Athens: A Day-long Exploration Of The Olive Oil And Wine Culture In Greece
LEARN MORE
BOOK

Aegina is one of the most important and historical islands of Greece with a vast history. Just an hour away from Athens, -so close that it has even earned a mention in our Athens travel guide- it offers so many options to the traveler from ancient sites, medieval settlements, and modern history landmarks to wonderful beaches and secluded islets. In case you are in Athens and you're planning your city escape, choose Aegina and you won't be disappointed! Let us help you to plan your own trip to Aegina or check out one of our Greece tours!

Share this:
More in this category: « Top 10 Things to Do in Delphi || The Best Day-Trips From Athens »
back to top

1. Visit the temple of Aphaia

3. Sail to the islet of Moni

4. Spend some time in the old town of Aegina